Kiritaki Hut, Ruahine FP, Sat-Sun 30-31 January 2021
Banner Photo: A panorama photo taken from the front of the hut by Rob (son of Mike)

How quickly the memory fades of the nasty bits of a tramp. It was 2015 when three of us did this tramp, and Juliet and I recalled the climb we had to make up a slip face to get to the hut from the raging stream. This time again, only three of us, Fiona, Juliet and me.

The start is at the Kumeti road-end, and up the Mangapuaka Stream. The stream bed was dry, so I hoped that we would come across some water before we needed to leave it as I had not filled up my water bottle. After a 15-minute walk up through willow, we heard and saw water. 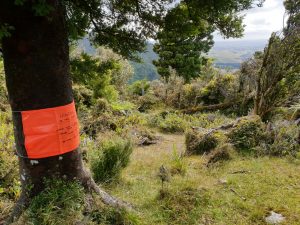 The signage advising of hunters in the area

The climb up to the ridgeline is a zig-zag, through bush, and we soon reached the turn where we headed west. A sign tied to a large rimu tree was not hard to miss. It advised of hunters in the area. Further up the ridge, we saw another sheet of paper tied to a tree and thought: “They are very pro-active with the signage”. They were both signed off by ‘Puffin’, and we soon got the gist when he came puffing around the corner in front of us. The three hunters, after shooting a deer the previous last night, had gutted it and carried the meat back up the steep slope to their camp on the tops. 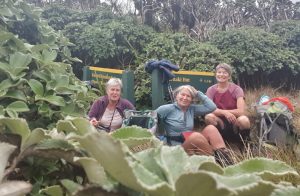 The pre-lunch break at the Kiritaki Hut junction

We made good time to the turn-off to Kiritaki Hut (2hrs), and so had a pre-lunch break here. The sign indicated 1-2hrs to Kiritaki Hut. Leaving a message for the day party, we headed down.

The track starts reasonably well, but then becomes increasingly steep, and we were hampered by fern growth which made it difficult to see the ground. Some big steps down also made it hard, so it was time to get onto the backside. My ageing knees were taking a hammering, so the going was slow. We reached Oruakeretaki Stream and headed down it looking out for the turn-off sign to the hut. Some big boulders to negotiate around, but we soon came across the sign. Thirty minutes to go. Parts were a little muddy, with some more steep steps up.

We arrived at Kiritaki Hut at 3.00pm, to find that three bunks had already been taken – so, with us, it was a full hut. A hot drink, followed by a wash and then we all had a nap, to recoup our strength. 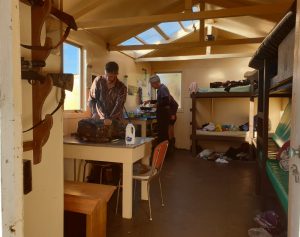 The interior of Kiritaki Hut

We rose to make and eat our respective dinners while one of the other guests, who had been collecting some firewood, got the stove alight. It certainly warmed up the cool night – almost winter temperatures. We chatted to our other bunkers (a father and son out on a two-night stay to hunt) and a solo tramper who had come in from Loveday Road. We soon realised that he would be our salvation in getting back to our vehicle, and he was generous in offering us a lift. The thought of climbing back up the hill we had come down was too much for all of us. 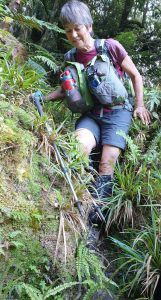 So the next morning, we took the DoC track to Raparapawai Stream. I had not taken this track before, so it was all new. The drop down was steep, but not quite as steep as yesterday, or maybe we were getting acclimatised.

On reaching the stream, it was a steady walk out, widening after about halfway down. On reaching the road-end, Rob (our kind driver) who had overtaken us in the stream was waiting patiently.

We’d had a challenging two days, and were soon back at Kumeti road-end, and then at the Norsewood Café. 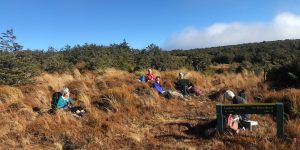 Sentry Box to Master’s Shelter, Ruahine FP, Saturday 2 July 2022 Banner Photo: The closest we got to Aranga Hut, and Alison on her throne. Photo by … END_OF_DOCUMENT_TOKEN_TO_BE_REPLACED 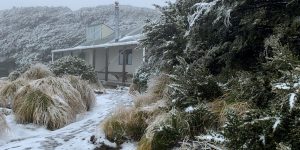 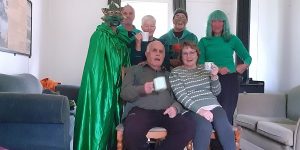 Robson's Lodge, Kuripapango, Saturday/Sunday 18/19 June 2022 Banner Photo: In our 'green' costumes After five hours of pulling up or chopping down … END_OF_DOCUMENT_TOKEN_TO_BE_REPLACED

Contents: Membership fees Subscriptions are now due, and can be paid to the club's bank … END_OF_DOCUMENT_TOKEN_TO_BE_REPLACED

Contents: Membership fees Subscriptions are now due, and can be paid to the club's bank … END_OF_DOCUMENT_TOKEN_TO_BE_REPLACED 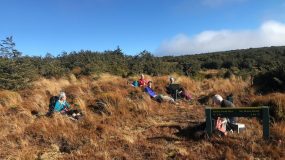