Fifteen keen trampers met at the Park Island car park on a glorious Saturday morning. By van and car, we travelled two hours to begin the ascent of the Parks Peak Track. One tramper had forgotten socks, but there were offers of three pairs from various people.

We crossed two rivers that were low, so feet were cooled for the two-hour uphill section of the Parks Peak Track to the turn-off for Barlow Hut. It is at grid reference 18777372/5599389 but not marked on Topo50 maps. Julia remained with the rest of the group while Chris, Fiona C, Sue G, Helen, Kate and Fiona B went ahead. 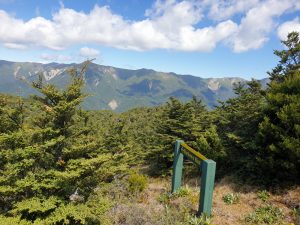 The turnoff down to Barlow Hut

The exercise of bush skills started here; we had trouble finding the track at times and there was much comradeship and laughter trying to find the right way. Safety in numbers worked a treat, with much banter on who was best at spotting the markers.

The descent proved challenging, with some bum slides and a lot of laughter before we finally reached the bottom. It was nice to see the hut sign. The hut has had a new fire installed and a clean-up, and is in fine condition. We were met there by Bruce H and a group of trampers from the New Plymouth Tramping Club in a team of four, one whom had caught a trout (which we wanted to eat). Three had walked from Sparrowhawk Bivvy up and along and to Te Atua Mahuru (1634) and down the Colenso track to Barlow Hut (6.5hrs) and were pleased to have their boots off and a cuppa in hand.

We had lunch and made our way down the cooling river and back to the car park; we had covered about 19 km in seven hours, so were happy to get our boots off, too. Everyone was home by 7pm, after a great day.

Julia reports that the second party made its way to the lookout claypans and had a lunch break enjoying the views across to the main range. We too had to look for markers, although there seemed to be a lot more orange triangles early on the descent. We also spotted the old marker orange ties (now completely discoloured) that Julia had put in some years ago. The downhill section, particularly near the bottom, could do with some more orange markers. 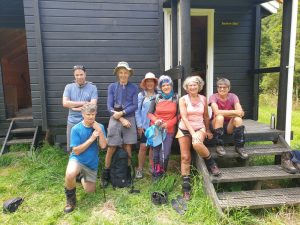 The second group with Julia

On arriving at Barlow Hut, we opted for a good 40-minute break, before tackling the river walk back to our vehicles at Yeoman’s car park.
With the temperatures in the 20C range, some decided to have a cool down in the river before heading up to the car park.

A long, but enjoyable day out in blazing sunshine.