We left Napier on a beautiful hot morning and parked the van in a paddock off Paget Road near the Makaretu River Bridge. After walking through lush farmland, we soon found ourselves at the river. A few chose the track to laze at Happy Daze Hut, while the rest went on upstream. 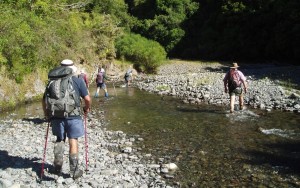 The river route was pleasant with its stony riverbed and occasional shortcuts in the bush. It was such a stunning day for tramping, especially as there was considerable cloud cover and even the water was refreshing on this rather warm day. It needed to be, with more than 100 crossings for the whole tramp! While we were having morning tea in the shade, we watched Gossy have his scheduled swim.

It was a very peaceful walk with just the occasional paradise ducks flying overhead and it didn’t take long to reach the junction. According to Gossy’s ‘easy to read Google Earth map’, we had walked 3.5 km. There we met John, who had come down the HD hut track and he continued with us for about another 3 km up the south branch of the river. We passed a small waterfall before lunch at Makaretu Hut, which isn’t visible from the river and we were pleased someone spotted the track to the hut, which is situated high on a bank where the three tributaries meet. 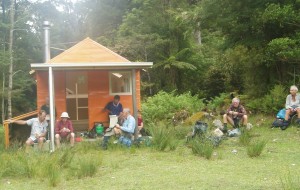 The return trip was downstream until the junction where we climbed the bank (the first and only time we puffed) and followed the route on private farmland to Happy Daze Hut – about 15 minutes. No Ron, Ray or Callum: they had all departed but left a note to say how quiet and peaceful it was. We were disappointed to come across a recently shot cattle beast lying near the hut. After a drink break, we continued on the track overlooking the river most of the way. Lots of green fields with buttercups, but no cattle or sheep. We made our way over the farmland to the van before 4 pm. The driver decided to head out via Paget Road, which proved to be shorter and quicker. As we looked behind, heading down Highway 50, black rain clouds smothered the Ruahines. Good timing! That was an easy, 14 km low-level tramp to start the year.