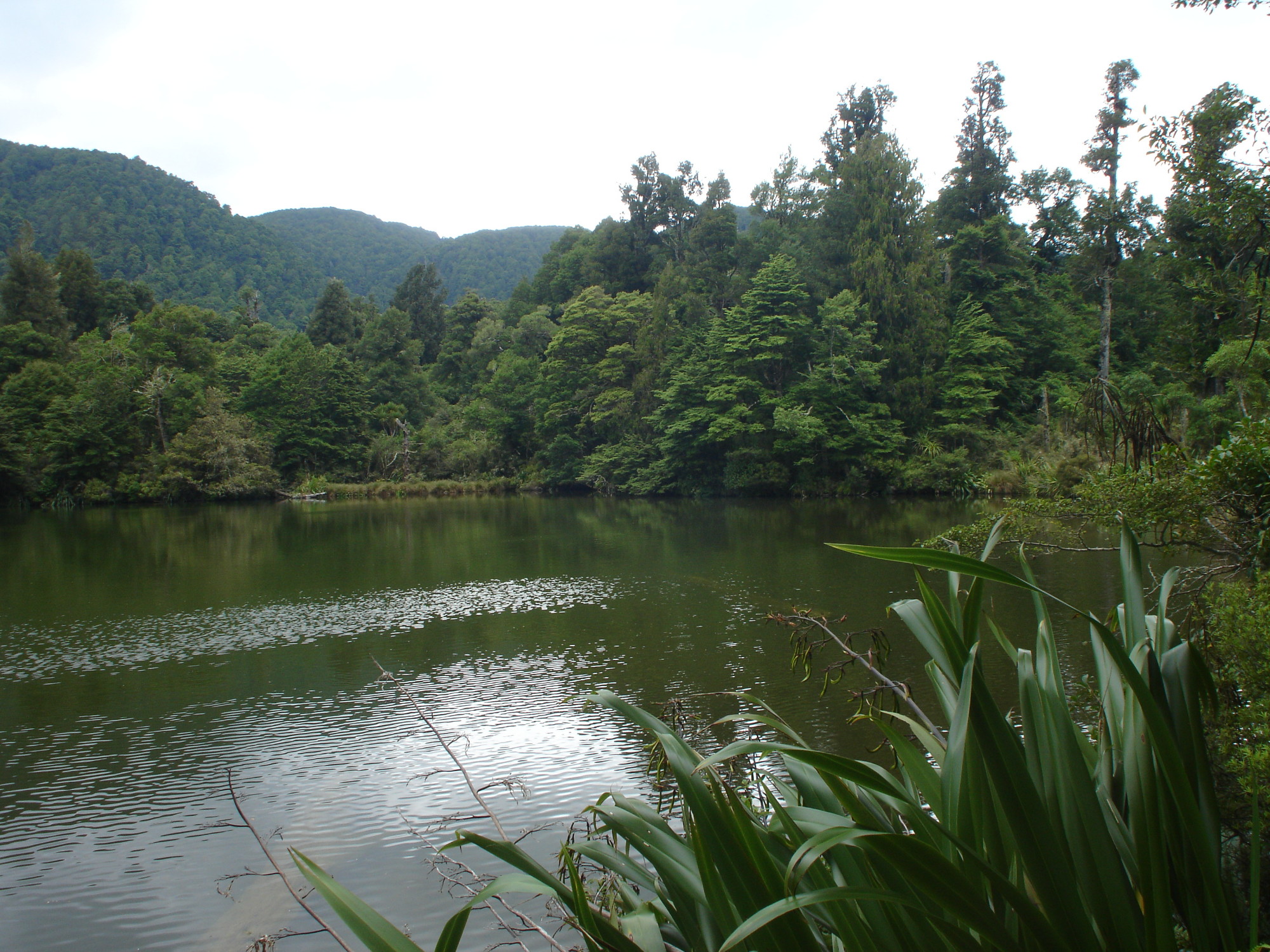 This was a ‘Classic Tramp’ out of the book by Shaun Barnett and Rob Brown. We had all set our sights on seeing parts of the Ruahines that we don’t get to in a weekend with the club. Not a club tramp, but a private one. 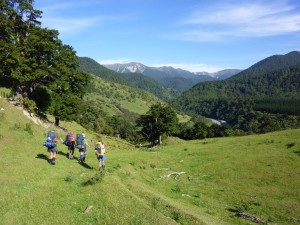 Day One – Destination, Maropea Forks Hut: On one of the hottest days in January, we headed off over farmland to the start of the track up Sparrowhawk Ridge, from Gold Creek.
Last time the track was covered in many tree falls in the bottom section, but it has been cleared and progress was steady. At the bivvy, while having lunch, a group of trampers from Howick Tramping Club joined me. They were on day three of a six-day tramp along the Ruahine tops. They asked about ’66’, as they had heard many horrendous stories of the difficulty on the scree slopes. They were relieved when I said ‘no problem’.

We made our way onto the tops, and headed north towards Orupu (1475), one more small scree climb and you are on the tops again. We could see the way toward Maroparea, and the ridge we needed to take us down to Maropea Forks Hut. It sidles around the south-western slopes of Maroparea, and then heads across to 1450. We stopped and looked north, trying to identify the tops. Te Atua Mahuru is not visible, as it is hidden behind Maroparea. 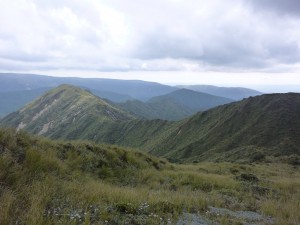 The route is easy to spot and we soon picked up the track markers for the descent down to the Maropea River. It was pleasant to be in bush after the heat on the tops.

As there was only one person staying in the hut on arrival, we all had bunks and so settled in for a good night.

Day Two – Destination Colenso Hut via Unknown Campsite: The track is straight up to the tops (1293) and the junction for either Otukota Hut or Unknown Campsite. The track time to Lake Colenso has been amended from the marked 3 hours to a scratched 5. The walk is through bush, and then along the tops in wonderful beech forest with a thick under-storey of the common Shield Fern. After a lovely long walk on level terrain, the track drops down to Unknown Campsite. This turned out to be a signpost, and a fireplace amongst the trees on a ledge just above the Unknown Stream. I had seen someone down by the stream on my descent, and noticed three backpacks on the edge of the campsite. 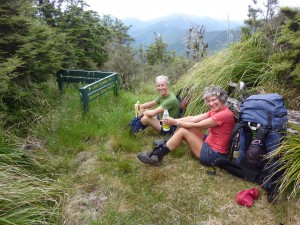 The owners appeared, asking where the Unknown Campsite was located. Just here by the orange marker and sign, I replied. They had a GPS and had been searching for it. It was therefore just under their noses or eyes. The eye technology is much superior sometimes to the electronic signal. We made our way up the side stream looking out for the marker that would take us uphill and over to Lake Colenso. The marker is high up on the true left side bank, with a grassy/muddy climb out of the stream. A small climb up to an overhanging rock, and then onto a ridge, where you get the first glimpse of Lake Colenso. As you progress down the ridge, the views get better. 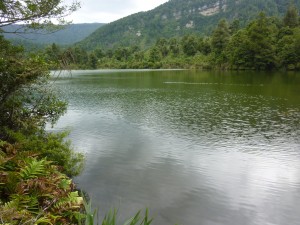 Near the bottom is the junction of the Iron Bark Hut track, and we had a rest with the feet up. Only 30 mins to go, so let’s enjoy this. A side track to the lake only 10 minutes from the hut is compulsory as it is the only way to get up close to the lake. The bush surrounds the lake, which looks picturesque; so photos were taken, and we sat and admired the views. Les was happy, as a 30-year goal had been achieved.

On to the Colenso Hut, and there are a party of six trampers from Palmerston North Tramping and Mountaineering Club already arrived over from Iron Bark. We bagged the remaining two bunks and pitched the tent for John D, and Les opted for his bivvy bag in the bush. The hut has a view over a river bed. The mosquitoes were also in abundance, so covering up was essential.

Day Three – Destination Ruahine Corner Hut: After a night with a moderate amount of sleep due to a snorer, we set off early again at about 7.30. The route follows a stream for 1 km and then it turns into the Mangatera River, before we turn onto Potae Stream. Les and Geoff heard the call of a blue duck, and then we spotted the two parents and four ducklings. They all looked healthy and we stopped for photos. What luck to hear and spot them. 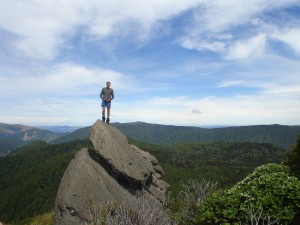 We all knew we had a climb up to Potae, which in fact takes only an hour. Near the top, Potae can be spotted through the trees. We had a good long break with photos and land orientation. Let’s enjoy the moment, as another of Les’s goals had been achieved.

The rock formation is terrific. The track from here passes through a stand of mountain cedar; we stopped again to admire their form and colour. The track passes underneath some huge limestone bluffs, and then gently descends to the grassy plain of red tussock. The airstrip is clearly visible and eagerness to reach the hut before the other tramping party also heading this way from Colenso Hut spurred us on. 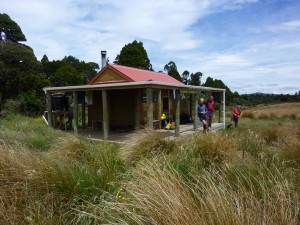 The walk out of the trees onto the tussock and – behold, the hut in the distance – is magical. We reached the hut and found that three hunters were in residence, although away. We lunched inside with a hot brew, and pitched the tent behind the hut out of the wind blowing north-westerly. On hearing the sound of an aeroplane, we raced onto the helipad. We had our own special fly-past and wing-waggle. Brian and his instructor in KFA had made it, as planned, to visit us overhead. A wonderful treat, which made me very happy. They didn’t have too many winds or mountain thermals to contend with, but also enjoyed their experience. 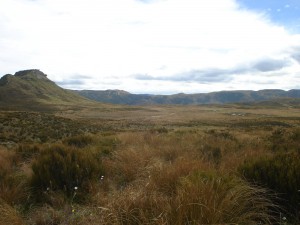 We then decided to do a recce, and look at the Makirikiri Tarns. The route is marked to the airstrip, and across the plateau. We eventually neared them, and had a sit down in the red tussock to savour the feeling and views. We decided not to go close up, but returned back to the hut, via the limestone sinkhole that is near to it. Les and I went down to investigate the water flowing through it and the cave at one end, where the water disappeared. No shortage of water here.

Back at the hut, the three hunters (father and two sons) had returned. They had been choppered in on Monday, and were due out the next day, too. They had seen lots of deer, and shot and kept the venison of three, one each. They were happy on their annual hunting break.

We spent time resting on the newly upgraded verandah until dinner time, then to bed. We needed some good sleep, for we had a big tramping day tomorrow. Thank heavens for earplugs. The sound was considerably deadened, and I think I got some sleep, albeit a small amount.

Day Four – Destination Makaroro River, Farm car park via Ruahine Tops and Colenso Spur: Up at 5.45, as we have a long way to go. I don’t think I had digested the timings as advised in the book, Classic Tramping, which were that an 11-hour day was the minimum time.

We reached the Potae junction turn-off and then the Ruahine tops signs exactly as posted – three hours. The views from along the track back to the Mangohane Plateau and Potae were spectacular as the weather had remained fine and sunny. On reaching the Ruahine tops, we donned warmer top clothing, and then made our way past the tarns to the Totara Spur turn-off down to Upper Makaroro Hut. Decision time, and as we still had good visibility and were going well, we continued on our original schedule to close the loop and walk along the tops to the Colenso Spur turn-off. More warm clothing; this time leggings were worn, and we made our way up to Tupari. From this high point, the track arcs south-west and the slips and the next high point, Ina Rock, are visible. The wind had picked up and we started to question the decision. Ah well, no turning back now, but the planned visit to Kylie Bivvy is canned, as we cannot waste any more energy. Another trip maybe…. 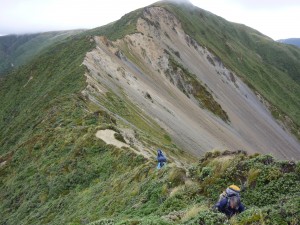 The legs are starting to tire as the wind saps energy. The gusts were strong and Les helped me across some of the wind tunnel spots. We rested in hollows to regain our energy on numerous occasions. From Ina Rock, another stretch beckons, and then once gained, another. At the base of Te Atua Mahuru, while huddled in a hollow out of the wind, we checked our GPS position and confirmed that this was the last of the undulations and that the turn-off down Colenso was off the top.

Yahoo, what joy to get out of the wind, once we started our descent down the east-facing ridge. Once into the bushline, we took off all the warm gear and got back to the knee-crunching walk down the ridge to the Makaroro River. We were running late for our pickup time, but ‘that’s life’.

We ended the tramp walking back over the farmland again. The total time of travel had been 11 1/4 hours. I didn’t feel too exhausted… yeah right!

We are pleased that we’ve done the tramp and seen some wonderful back country. The trip will go back onto our wish list again, perhaps taking in Iron Bark Hut and Otukota Hut. Plus, we still haven’t crossed the threshold of Kylie Bivvy.