We set out from the EIT at 7am with the weather good and expectations of a hot day.

The Taihape road was dusty as usual but a lot of work is under way to seal much of it, so next time we may have a sealed road. Marc parked his car at the Kuripapango car park and camp site and the four passengers hitched a ride in the van to the start of the track, where Gossy would then drive the van back to the campsite.

It was a tough start to the tramp, with warm weather and a steep climb, but luckily not a long climb; we were on the tops in about an hour. Extensive views and hot, windy conditions awaited us, and not much shelter. We saw some interesting high cloud formations. 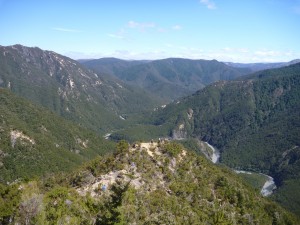 We had a few quick drink stops and a morning tea break near the turn-off at the ridge down to the river. Julia and newcomer Jo, who were slightly behind the main group, walked past without seeing us, so a search party went out to find them. They were not far away, and rejoined us quickly for the steep descent down the ridge.

It was a relief to get out of the sun and into some bush, but the track was very overgrown and clearly in need of some care. The swing bridge and river were particularly picturesque, and it is a very nice walk from the bridge to Cameron Hut. It would be a lovely place for a weekend or longer. 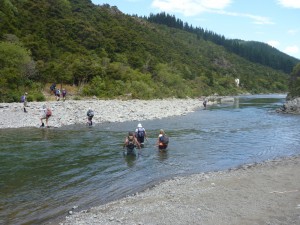 After a relaxing lunch under the trees, we set off downstream, back along the Ngaruroro. The river was clear and warm, so there were plenty of opportunities for swimming in many deep pools. There were also a few drink stops along the way, which were eagerly taken!

We arrived back at Kuripapango camp site around 4.30. All in all, a good day, but not one to do if it had been any hotter! Well done to Jo who survived her first tramp, and hopefully will be back for more punishment.