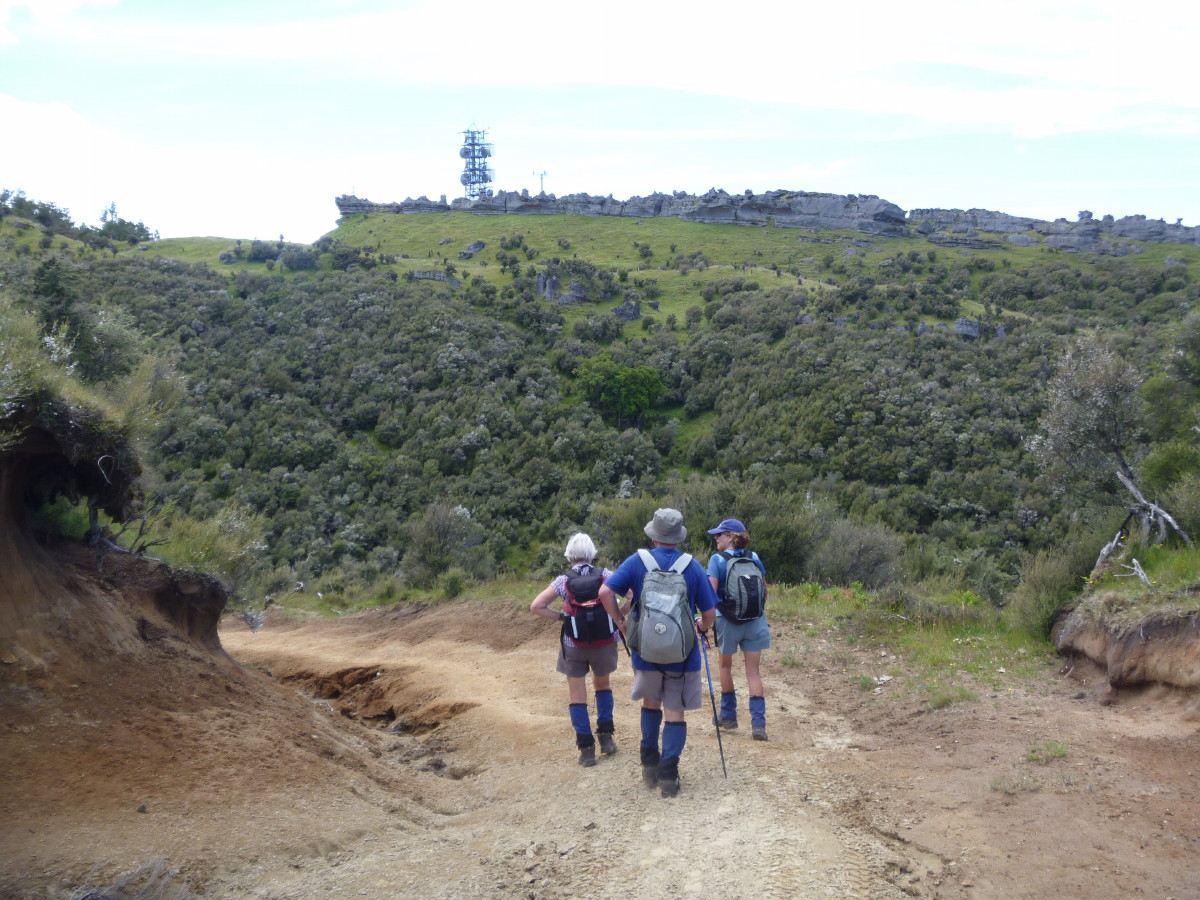 Kelvin parked the van next to the woolshed on Potter Road. Three of our group decided to stay low and do their own thing.

On a tramp to the trig last year, the group became slightly misplaced. So this time we needed to work out the best route. Where is the start of the 4WD track? Have we gone past it? There is a farm track all the way, but tracks criss-cross the farm in every direction. 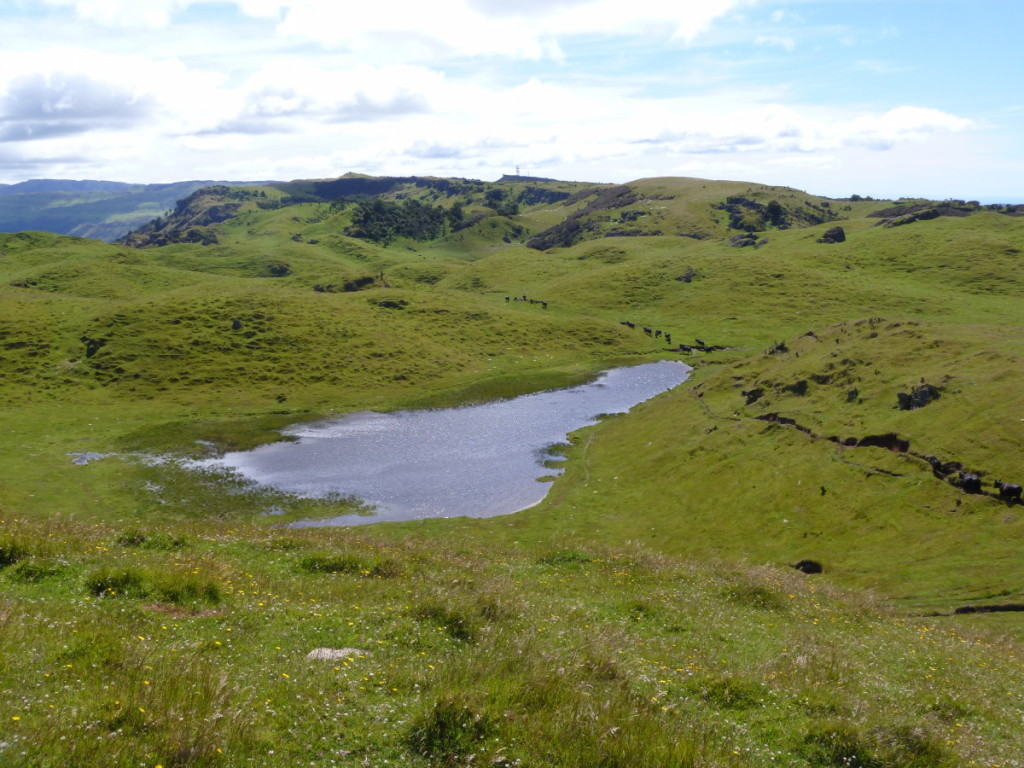 One of the tarns, with the Te Waka transmitter on the horizon.

In the end, we decided to head along a lower farm track, then climb up on a compass bearing to the tops. Once there, we could see the top of the transmitter in the distance. There was good visibility and a strong, cool breeze.

We began to approach the tarns, disturbing some cattle with their young. We waited until they had gone by before continuing. Their grass was in a very healthy condition.

The group was able to pick up farm tracks all the way along the tops before dropping down, then going up to Te Waka, arriving at about noon for lunch and enjoying good views towards Napier, Cape Kidnappers and the Kawekas. 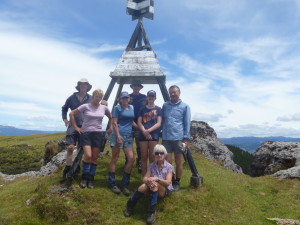 We have reached the Te Waka trig

After lunch, we set off with the aim of trying to find the correct farm track back to the van. Part-way along the tops, we must have drifted to the left, away from the tarns, and ended up in scrub that had grown over the grass. We corrected by going to the right, got back to the tarns and headed along various tracks until Kelvin was sure of our bearings and we found a farm track that descended steeply from the tops. Then we switched back to cross a stream and sidle around the western face.

Across the paddock trotted a small group of antlered deer. They effortlessly jumped the next fence and disappeared. We continued on down to the van, meeting two sheepdogs and Andrew Carswell’s brother who’d turned up for a chat. 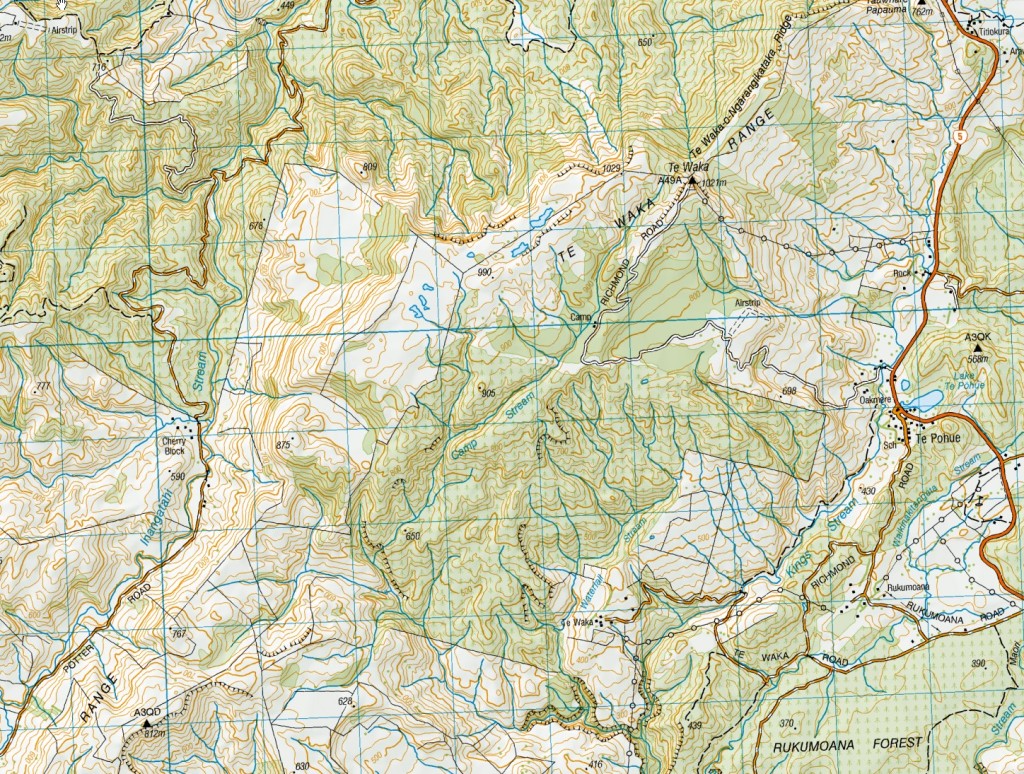