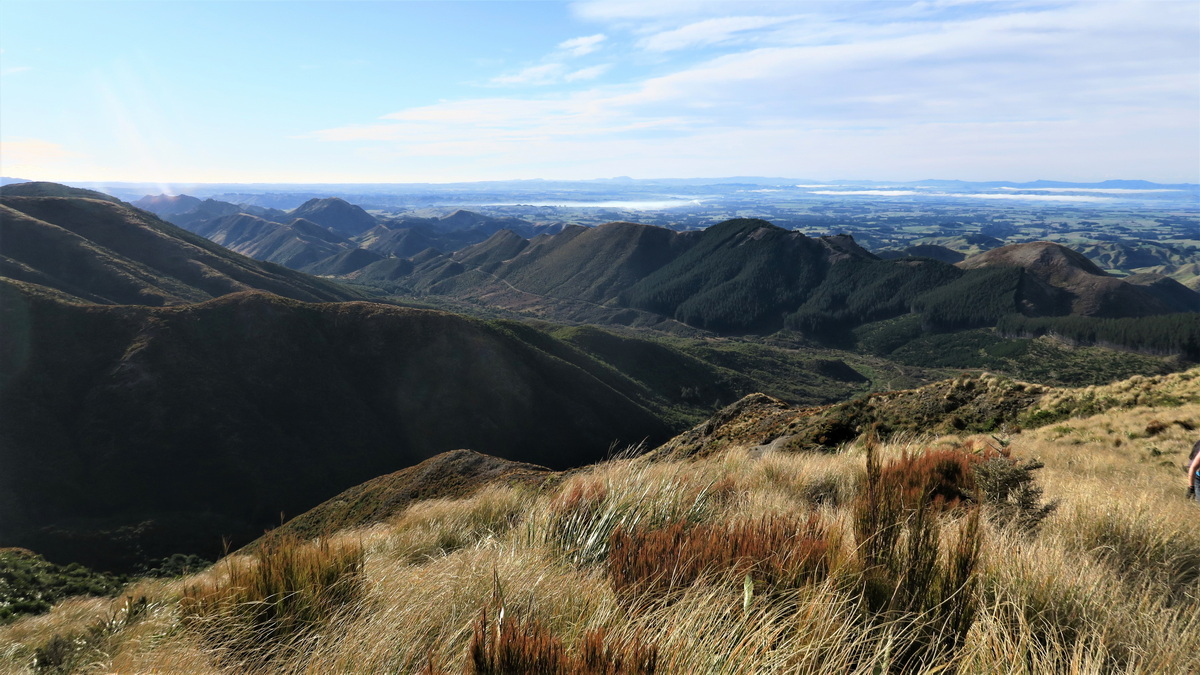 With the cancellation of the Tararua weekend tramp (because Jumbo Hut was fully booked) there were 11 trampers keen to tackle the day tramp. This was from the Longview Hut car park up to the tops, round the ridges and return via the Daphne Track.

For various reasons, we were somewhat delayed on our departure from Park Island. Then one of our number realised en route that they didn’t have water with them! So it was a diversion to Onga Onga to sort that out, which meant a slightly later start to the day than normal. We eventually reached the car park after successfully negotiating Kashmir Road. There seemed to be less loose gravel on the road so there were no issues with getting the cars up to the top compared with our last trip. Overall, the road currently seems to be in fairly good condition. 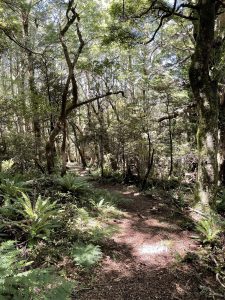 At the car park, Geoff generously announced that he was happy to just go up and back the same way so that he could then be at the bottom car park when the main party arrived, and shuttle the drivers to collect their cars.

So we all trooped on up the hill. The front-runners, however, must have decided that they needed to make up for lost time as it was a bit of a sprint uphill for them. We regrouped at the turn-off and there were eventually nine who took the route round the ridges.

The day was absolutely glorious and there was just a slight cool breeze on the tops, which made the ridge a very pleasant place to be. There was much appreciation of views on that part of the trip. We lunched at midday, with those wanting sunshine resting at the entry point to the bush and those wanting shade moving slightly up the track into the bush. 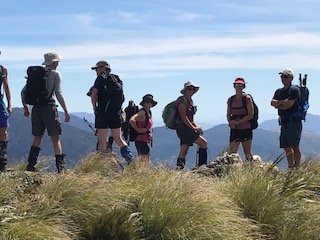 Checking out the way to join the Daphne Track

We hadn’t seen any other trampers on the ridge but after we started our descent we came across a couple who were heading on up to Howletts. It would have been a very hot tramp for them. Even for us, as we descended and were exposed to more sunshine, it got hotter and hotter. So hot that Deena couldn’t help herself when she got down to the stream; she just had to lie down in it to cool off!

We made it to the bottom car park about 2.30pm – so early that Geoff hadn’t got there. He was just taking his time, thinking we would be another 30 minutes or so. Fortunately there was a young hunter who had just called in for a look and offered to take the drivers up to collect the vehicles. There was some to and fro with that, but finally we were all on board for an early return home.

Overall, it was a great way to end the first month of the new year.

Aranga Hut On Saturday 14 January the tramp was changed to a loop in the Northern Ruahine Range. … END_OF_DOCUMENT_TOKEN_TO_BE_REPLACED

Aranga Hut On Saturday 14 January the tramp was changed to a loop in the Northern Ruahine Range. … END_OF_DOCUMENT_TOKEN_TO_BE_REPLACED