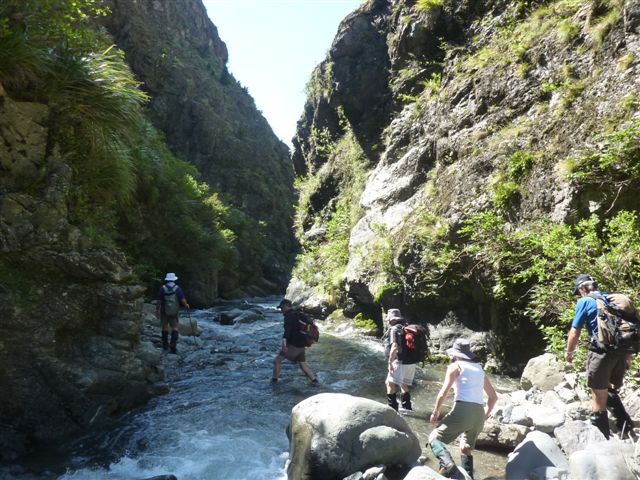 This tramp began at the end of North Block Road in the Ruahines. We had checked the water level in the Waipawa River on the way in and it looked ideal. Even so, some chose not to get their feet wet but instead climb to Sunrise Hut and beyond in search of alpine flowers. This suited the six of us who wanted to do the through trip downriver to the Pendle Hill Bridge, as they would be able to relocate the van for us. The weather was perfect: a clear sky and a little wind down the river although possibly a little too warm in the open latter part of the trip. 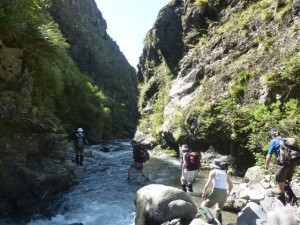 From the car park, it was off down the riverbed with countless crossings, past a waterfall then into the bush-enshrouded gorge. Over and around big rocks, in the main heading downstream but with some diversions to sort out a “do-able” route. We exited the gorge onto more open farmland at about the point Middle Stream joins the Waipawa and stopped for lunch at the confluence with Smiths Stream. We guessed that there wasn’t much shade ahead so had lunch under a tree before the second section, the open riverbed through farmland.

The flow from Middle and Smiths streams had more than doubled the flow in the Waipawa River, so caution was still needed on the continuing numerous crossings. As well as the constant babble of the river, we were hearing the snap, crackle and pop of lupin seedpods, lupins being the main vegetation along the river. At times, we got views back upstream to the ranges, which confirmed we had actually travelled quite some distance.

I had just been starting an internal debate about the difference between a tramp and a trudge but I didn’t need to conclude it as the bridge that signified the end of our tramp hove into view. I think we were all relieved that that section of the tramp was over. With perfect timing, the van arrived as we were enjoying getting wrinkled white feet out of our boots.

Sparrowhawk bivvy, Ruahine Forest Park, Saturday 6 August 2022 Banner Photo: The view east, towards the Wakararas and beyond On a beautiful … END_OF_DOCUMENT_TOKEN_TO_BE_REPLACED

Prologue: The author was on the Whirinaki tramp, reported on this website under the headline 'We observe a mock turtle and the rodent of Upper Te … END_OF_DOCUMENT_TOKEN_TO_BE_REPLACED

Ruahine User Group A meeting was held on Monday 25 July, in the NZDA rooms in Dannevirke.  Julia … END_OF_DOCUMENT_TOKEN_TO_BE_REPLACED

Ruahine User Group A meeting was held on Monday 25 July, in the NZDA rooms in Dannevirke.  Julia … END_OF_DOCUMENT_TOKEN_TO_BE_REPLACED

Ruahine User Group A meeting was held on Monday 25 July, in the NZDA rooms in Dannevirke.  Julia … END_OF_DOCUMENT_TOKEN_TO_BE_REPLACED

Ruahine User Group A meeting was held on Monday 25 July, in the NZDA rooms in Dannevirke.  Julia … END_OF_DOCUMENT_TOKEN_TO_BE_REPLACED