The first tramp of the new year turned out to be very short for some and very long for others! Twenty two members ventured out on a beautiful sunny morning, the day promising to be hot with little wind. Three vehicles headed up Puketitiri Road but, just before Patoka, Ted’s van broke down. All the vehicles were full, so some volunteered to go back with Ted and have an early day, with the rest carrying on to Makahu car park. 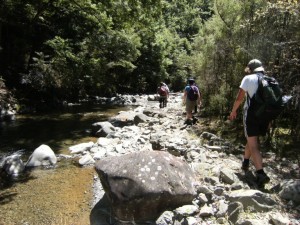 We dropped John Marshall off at the Quarry, and Vic, Ray and Simon went up to see the wild flowers then bring the vehicles round to Jack’s ford to meet the rest of the group. The remainder of the party headed off into the bush behind the DoC buildings in search of the little stream that would take us into Pinnacle stream and eventually the Makahu River. After a bit of bush bashing, we found running water and headed off downstream.

This section of the stream was narrow with biggish rocks and small waterfalls to negotiate, very pretty with ferns, mosses and large beech trees giving us plenty of shade. After an hour or so, the Makahu River joins on the left and becomes a much bigger, wider river. Steep sides dominated by beautiful beech trees, the water and a warming day made for very pleasant walking.

Unfortunately, one of the party developed a sore ankle and had to slow down, leaving a group of three at the back. The main group stopped every now and again to let them catch up and we all had lunch in a lovely shady spot. Consulting the map, it became clear we weren’t making fast progress and thoughts turned to our likely arrival at the ford.

The afternoon seemed to go very quickly and still we had a long way to go, so an advance group was sent ahead to phone out and let it be known we would be late. The bridge to the Nicholas farmhouse was sighted about 6.15pm and all arrived at the vehicles by 6.30pm – very happy to be to be able to sit down!

A pleasant (if long) day, a bit hard on three new people out for the first time, but they did well and we hope to see them again soon.