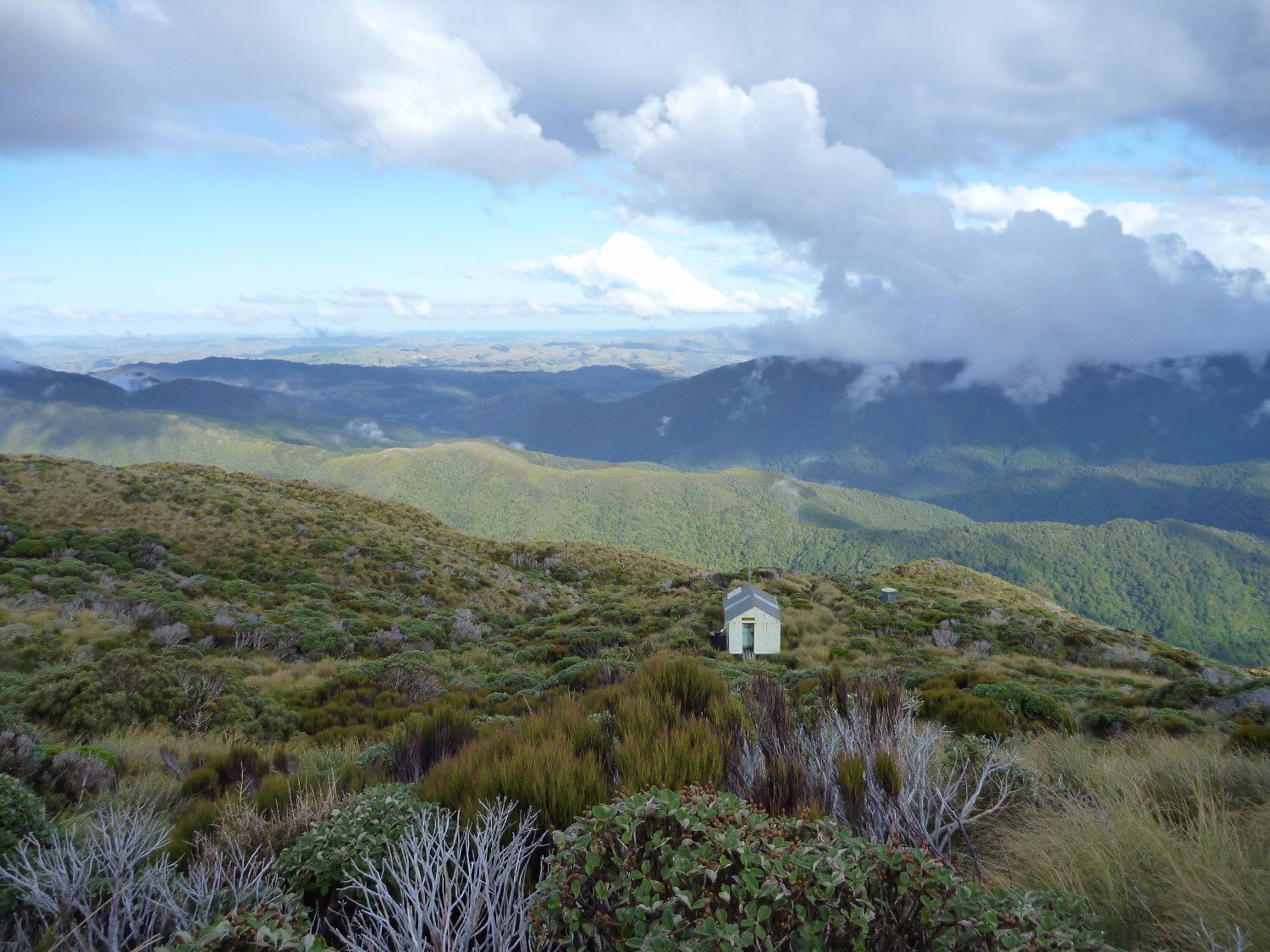 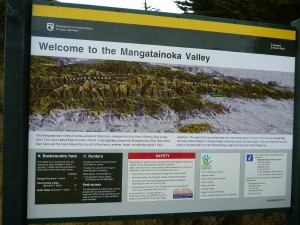 The new information board – top marks

Two old fellas and two girls (young at heart) set off from Putara road-end. The first thing we noticed was new signage for the tracks in the Tararua Range: ‘Welcome to the Mangatainoka Valley’. The bird’s eye map and layout is much better then the old.

We have all been to Roaring Stag Hut before, so we knew that we had a three-hour walk. The track sidles along the Mangatainoka River, crossing two swing bridges. From the second, the track commences the climb up to the junction for Roaring Stag (south) or Herepai (north) huts. We had left the car park at 9.30am and reached the junction at 11.00am.

The track to Roaring Stag is now a downhill, at first gradual, through some very muddy stretches, before dropping to the stream. It does not cross the stream at this point, but sidles alongside. When the time comes to cross, the best spot is just above a big log that straddles the stream. Soon there is another crossing, but much smaller, and you’re at Roaring Stag Hut. Alison and I arrived at 12.30 and had our lunch.

The two old fellas arrived and decided that this was to be their final destination for today. We posed for pictures, and then Alison and I set off. The ridge track to Cattle Ridge Hut is a 2km climb of 600m. The ridge is directly opposite the hut, after crossing the swing bridge, and both of us had wanted to get to the top of Cattle Ridge. 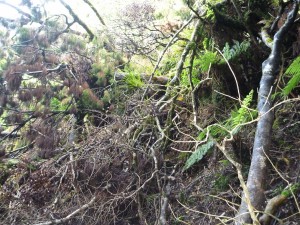 The debris through which we should have crawled

We set off at 1.30pm, and after a steady climb of about 45 mins, on a clearly marked track, we came across a huge rimu tree, which had fallen across the track. It had also brought down some other trees. There was an orange marker amongst the debris, and an orange marker further up on a fallen tree. We decided to go up to get around the debris, but then could not find the track. We checked out each side, but could see no marker. The GPS came out, but really was of no use (we knew where we were). We decided that the best option was to bush-bash our way up the ridge, and hope that at some point we would reconnect with the track. So, after around 15 minutes, we were reaching the edge of the bushline, lo and behold an orange marker. Yeah! But we had wasted at least 20 minutes. It was the marker above the debris that had put us wrong. We should have gone further back to the marker amongst the debris. Ah well, lesson learnt.

The track continues to climb through low scrub, and then eventually grass. Ted had advised us about some rocky sections which were near the approach to the hut. There are some stretching sections, which required leveraging up, which means that you can’t tank along. Alison was counting down the humps. Through the leatherwood and scrub, the track is easily discernable. We had a passing shower, and stopped to view the Roaring Stag Hut below..

After climbing over another high point, the top of the range is visible, and another ‘lo and behold’: a tarn and the hut. It is not quite your orange hut as found in the Kaweka ranges, but still a welcome sight. A radio mast is attached at one end.. 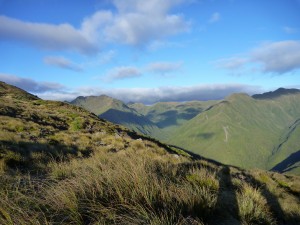 Mt Bannister with Arete behind it to the right, from Cattle Ridge

On walking inside at 4.05pm, we saw that the clock on the bunk was showing the right time. This is a small five-bunk hut, maintained by the NZ Deerstalkers Association. The fire has been removed, along with the sixth bunk. After a hot drink, during which a rain shower passed over, we poked our heads out the door, and it was fine again. Cloud was swirling around, but we decided to check out the views from the top. A brisk, 10-minute climb put us on Cattle Ridge. Initially, we could not see a thing, but the clouds swirled away, and allowed us a view of the Tararua Range opposite. Eye-poppingly amazing..

We decided to get further up the ridge and follow cairns up to a high point Pukeroa (1318). Cattle Ridge is broad, and we got glimpses of parts of the main range. We returned to our hut, cooked our dinners, and hopped into the sleeping bags to keep warm. A kind tramper had left a lot of women’s magazines, which helped pass the evening. They were the type you’d never buy yourself but are happy to read at times like this. 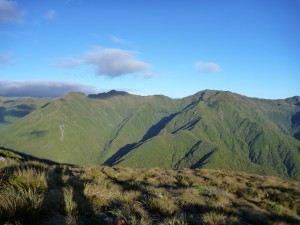 Mt Dundas (left) , with the track up to Dundas hut on the smaller middle ridge

The next morning, we woke to a cloudless sky, and made our way back up to Cattle Ridge. This time we got the full panoramic view. What a treat. We’d taken the map, and identified the peaks. Mt Dundas (1499) is directly opposite (yesterday we had noted the standards that mark the track down, and the smaller ridge up to Dundas Hut). To the north are East and West Peaks, to the south-west, Mt Bannister and in the distance, Arete (1505).

We made our way down, and retraced our steps to Roaring Stag. We were intrigued as to where we had missed the track, and discovered that the marker amongst the debris was where we should have crawled through, to pick up the track which traverses the ridge, heading south, before heading steeply uphill.. 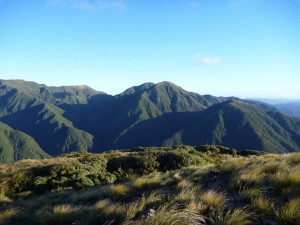 We had a break at Roaring Stag. The old fellas had had the hut to themselves, and had collected and cut firewood. They said that a lot of ears would have been burning during the evening, but not Alison or mine. Phew..

We made our way steadily back up to the ridge junction, and then commenced the downhill over the mud and tree roots that are part of the tramping experience in the Tararuas. On the way, we met another tramping party with a dog who did not like me. Tough. We passed them, and picked up the pace to get back to the old fellas, who had made their way out 45 minutes earlier.

Alison and I loved the challenge and were rewarded with wonderful views from Cattle Ridge. My muscles took a few days to come right, but I’d love to do more tramping in the Tararuas.