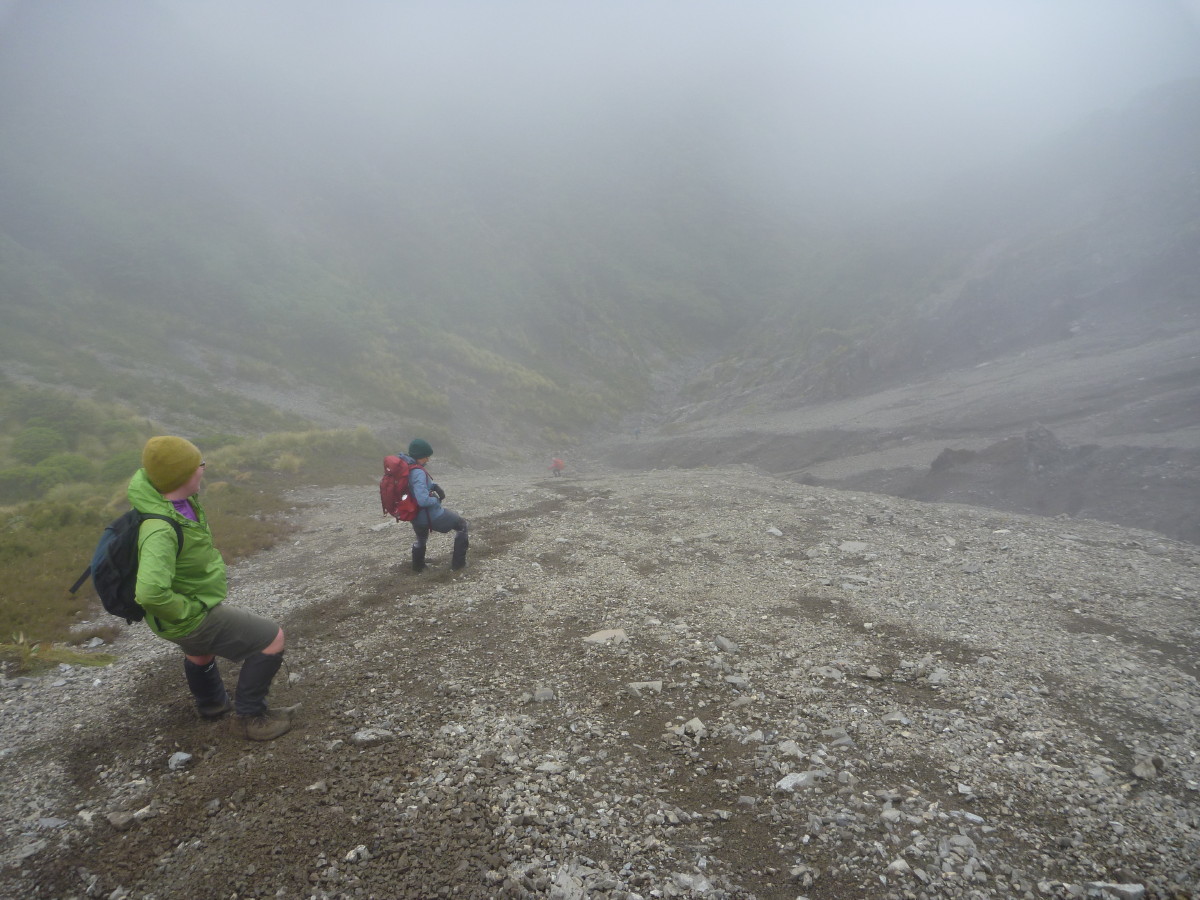 When we arrived at Sunrise Hut, it was clear that the trip over to Sparrowhawk Bivvy would have to be changed. What was the point in going across the tops when you could not see anything? One look above Sunrise Hut, where we could not see beyond 50m, was all that was required for us to change our destination. The Waipawa River North Arm via the shingle slide was a good alternative, as on a club tramp in December 2014 I had not gone down the shingle slide. 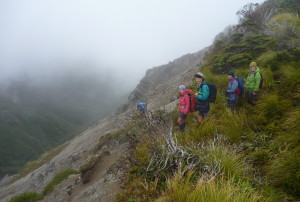 The top of the shingle slide, all smiles

So, six of us continued up to the Top Maropea Hut turn-off and took the group photo, before heading around on the Te Atuaoparapara route to the drop-off down the shingle slide. We had two newer club members with us, so we gave them a chance to experience the wonderful fun it is to walk/run down the shingle slope – just like descending Mt Ngauruhoe, where it is all over in a few minutes. 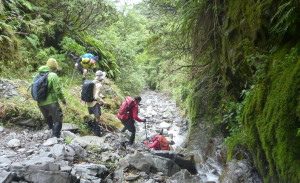 Some scramble down the side of small waterfalls

We entered the river bed, and then for the next two hours made our way down it, stopping for a lunch break on a grassy bank. A few small waterfalls required some care with the footing, but we all enjoyed the lovely banks, and walls covered in moss. In a few places, the huge trunks of trees which had fallen into the stream were like chopsticks, higgledy piggledy. There were many small side streams flowing into the river from steep gullies. The yellow rock daisy (senecio lagopus) was still flowering along the banks.

We reached the Waipawa River and had a good view of the Waipawa Saddle, as by early afternoon the cloud had lifted over it; but further north, cloud still covered the range tops.

We decided to return to the Sunrise car park via the track and not the river route, which meant a short climb (20 minutes) and then back down on the main Sunrise Track.

We were surprised to see a couple of vans in the car park from Freyberg High School, Palmerston North. A large school group was heading up to Sunrise, and our estimate was that the hut would be full that night. Perhaps that is why the possibility of a booking system is being decided for Sunrise Hut. From a club point of view, we are against the booking system; however, I must qualify that by adding that we never have spent a night there, as huts beyond are more in our sights for any overnight stay. 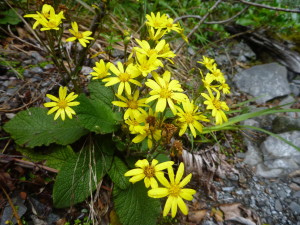 From an education standpoint, Sunrise Hut is a good place to take young children and families, so perhaps it might be time to see the benefits to them.

Our plan B tramp went well and we all enjoyed the day.