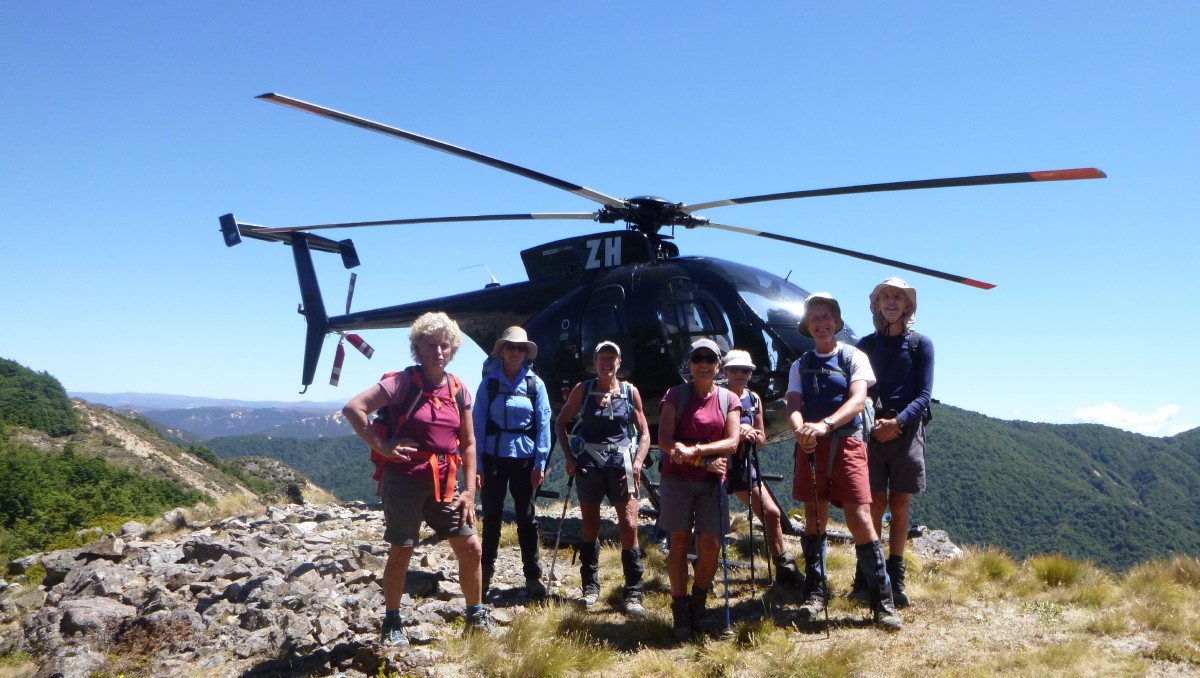 The forecast was for a sunny, warm day with light winds, perfect for the circuit around the tops, from the Lakes car park. Fourteen met at the car park but unfortunately Murray was feeling unwell so Margaret very kindly drove him back to town in John D’s car. 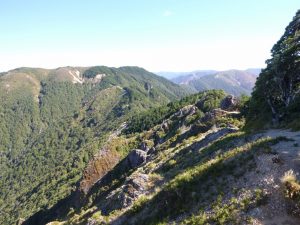 Ted, Sue, Vic and Gordon did their own thing while the rest made their way up Kuripapango along the Smith Russell track to Kiwi Saddle Hut. Beautiful views all around as there was not a cloud in the sky. Not much snow on Ruapehu and not a lot of water in the Ngaruroro. It was pleasant walking in the beech trees, as it was starting to warm up out in the open.

A quick morning tea stop at the hut, then a series of small climbs leading around to Castle Camp. Now we were out in the open, the small alpine plants looking a bit dried and feeling crispy underfoot. Great views to the west and up the ridges of the Kawekas, the temperature rising as midday approached. Just before our lunch spot on the on a small saddle before Castle Camp, we were buzzed by a helicopter, which then parked on the small open area before the camp. It was Chris Crosse, bringing in DoC workers to check out the area for contorta; there is a gang arriving next week to cut out those growing back after it was done several years ago.

There was also a party of hunters in residence, and we had time for a quick chat.

From the camp, which is nicely tucked among the beech trees, it’s back out into the open for the final 200-metre climb up to the trig on Kaiarahi. Now we had views to the east, Hawke’s Bay looking very brown with a heat haze, but we had a cooling sea breeze, great after the hot climb. 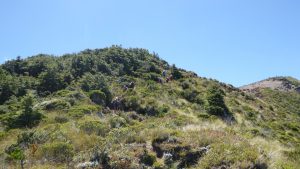 Descending from Kaiarahi towards Rogue Ridge

All that was left to do was wander along the tops, past The Tits, and down to the turn-off to Rogue Ridge. It’s a steep and slippery descent down the Rogue and the dry, dusty conditions seemed to make things worse. A few in the party made their way slowly while others just skipped down. It felt like ages, but at last we reached the main track then down to the river where our feet got a welcome dunk in the cooling water.

It had been a long, hot day, but it’s still one of my favourite day tramps; not sure about our two visitors – it may have been a bit much, but they seemed to enjoy the day.

Sparrowhawk bivvy, Ruahine Forest Park, Saturday 6 August 2022 Banner Photo: The view east, towards the Wakararas and beyond On a beautiful … END_OF_DOCUMENT_TOKEN_TO_BE_REPLACED

Prologue: The author was on the Whirinaki tramp, reported on this website under the headline 'We observe a mock turtle and the rodent of Upper Te … END_OF_DOCUMENT_TOKEN_TO_BE_REPLACED

Ruahine User Group A meeting was held on Monday 25 July, in the NZDA rooms in Dannevirke.  Julia … END_OF_DOCUMENT_TOKEN_TO_BE_REPLACED

Ruahine User Group A meeting was held on Monday 25 July, in the NZDA rooms in Dannevirke.  Julia … END_OF_DOCUMENT_TOKEN_TO_BE_REPLACED

Ruahine User Group A meeting was held on Monday 25 July, in the NZDA rooms in Dannevirke.  Julia … END_OF_DOCUMENT_TOKEN_TO_BE_REPLACED

Ruahine User Group A meeting was held on Monday 25 July, in the NZDA rooms in Dannevirke.  Julia … END_OF_DOCUMENT_TOKEN_TO_BE_REPLACED