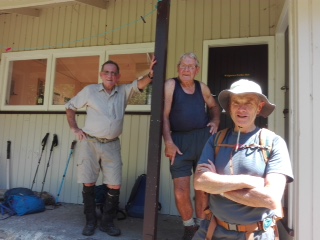 A glorious, sunny day greeted our five trampers at the car park to Sunrise Hut. After a briefing, we agreed that Vic would explore the area around Triple X Hut while the four others headed up to Sunrise Hut. 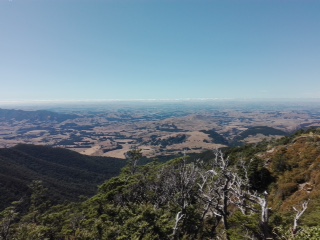 The views from the Sunrise Track over Hawke’s Bay

After an easy, steady zig-zagging climb, notable for the dryness underfoot and in the surrounding bush, we arrived at Sunrise Hut; it had taken one hour and forty five minutes.
The day was superb with hardly a drop of wind, even at the hut. Views over the Central Hawke’s Bay countryside were stunning, and the contrast between scorched brown paddocks as far as the eye could see and the green of the bush was startling.

A lively lunch at the hut was enjoyed and looking back over the terrain we had covered, along the skyline lay a long white cloud, the only cloud visible in a clear blue sky. We decided to retrace our steps to the turn-off to Waipawa Forks Hut; a quick descent was made to the turn-off, and a perfectly positioned seat – just big enough for four and bathed in dappled light – was used as a group resting place. 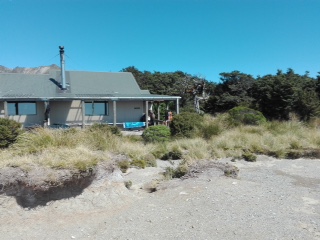 This was a narrower track, in good condition apart from some fallen beech trees on and surrounding the track. In no time, it seemed, we were enjoying another stop at Waipawa Forks Hut. It was sad to see a number of severely sunburnt dead and dying ferns on the approach to the hut.

Following this stop, we had a good walk along the Waipawa River (looking more like a creek) back to the car park via the Swamp Track, arriving there at 4pm.

It was a great day out. Many thanks to John Burrell who transported us in his car, and Ted Angove who led the party.

Trampers: Tony P, Ted A, John B, Vic and reporter Denise B

Aranga Hut On Saturday 14 January the tramp was changed to a loop in the Northern Ruahine Range. … END_OF_DOCUMENT_TOKEN_TO_BE_REPLACED

Aranga Hut On Saturday 14 January the tramp was changed to a loop in the Northern Ruahine Range. … END_OF_DOCUMENT_TOKEN_TO_BE_REPLACED