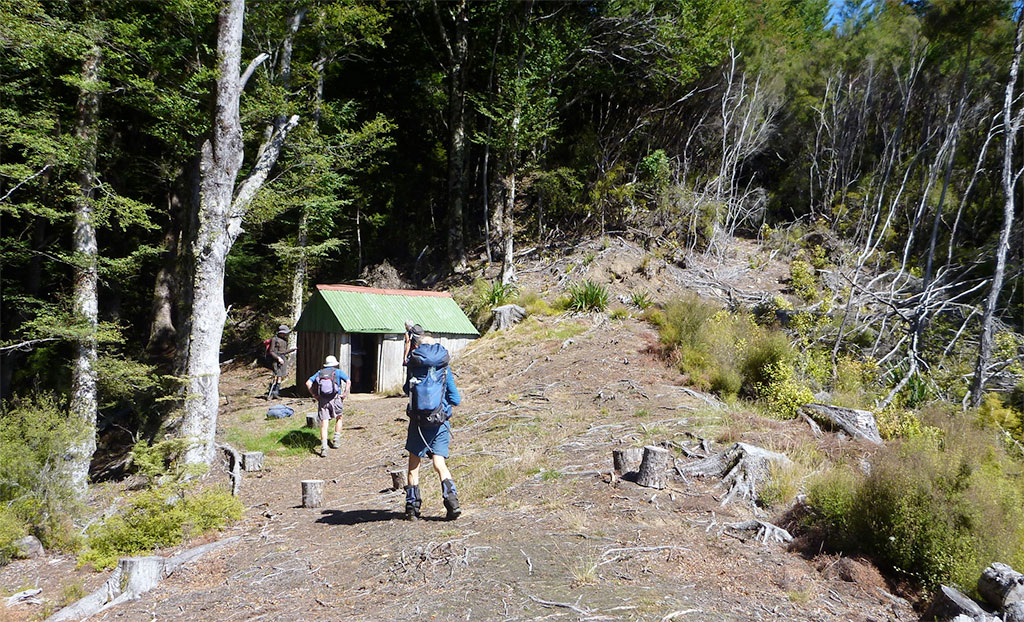 The planned trip to Back Ridge Hut changed when we reached the turn-off for the viewing point on Kaweka Road, on our way up to Makahu Saddle. 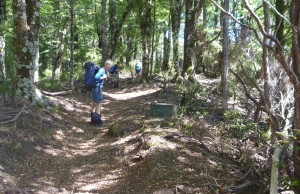 The outside loo, right next to the track approaching Iron Whare

We jointly decided that some of us would do the round trip to Iron Whare, Kaweka Flats Biv, and out to Makahu car park, whilst one of ‘the girls’ would drive the van to the car park and they would walk to Iron Whare from there. Transport problem solved for those of us doing the round tramp.

We started from the water reservoir, heading north to pick up the hunters’ track which follows a ridge down to Pinnacle Stream. Patches of scree, with low scrub and various markers tied to the manuka. Spot the next marker was a good game, but it was easy most of the time. Just follow your nose down the ridge.

We reached Pinnacle Stream, and hopped across it, so no wet boots. Again, there are markers (not DoC orange ones, but multicoloured tape) indicating the ridge to climb up to Iron Whare and some of my own markers left about two years ago, on a Duke of Edinburgh training exercise (orange plastic ribbon).

The climb has got steeper for the two old fellas, but they did OK for 75- year-olds. We reached Iron Whare, a historic hut which is in a great spot, but has no water nearby. We decided that it would be Kaweka Flats Biv for lunch. This is 40 mins away on a well marked track (DoC orange markers). We met the other party (the girls) coming to Iron Whare. The old fellas decided to wait and join them on their walk back to Kaweka Flats Biv.

A good lunch stop at Kaweka Flats, in the shade of kanuka bush, as it was becoming a hot day. We would have fried up on the tops. 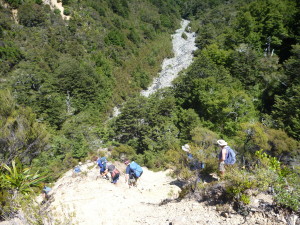 Dropping down to the stream from Kaweka Flats

The walk back to Makahu is an easy one, and in the bush most of the way, excepting the five minutes when walking upstream.

We had a short, easy day while the rest of Napier were sweltering in the heat at the Art Deco events.

Sparrowhawk bivvy, Ruahine Forest Park, Saturday 6 August 2022 Banner Photo: The view east, towards the Wakararas and beyond On a beautiful … END_OF_DOCUMENT_TOKEN_TO_BE_REPLACED

Prologue: The author was on the Whirinaki tramp, reported on this website under the headline 'We observe a mock turtle and the rodent of Upper Te … END_OF_DOCUMENT_TOKEN_TO_BE_REPLACED

Ruahine User Group A meeting was held on Monday 25 July, in the NZDA rooms in Dannevirke.  Julia … END_OF_DOCUMENT_TOKEN_TO_BE_REPLACED

Ruahine User Group A meeting was held on Monday 25 July, in the NZDA rooms in Dannevirke.  Julia … END_OF_DOCUMENT_TOKEN_TO_BE_REPLACED

Ruahine User Group A meeting was held on Monday 25 July, in the NZDA rooms in Dannevirke.  Julia … END_OF_DOCUMENT_TOKEN_TO_BE_REPLACED

Ruahine User Group A meeting was held on Monday 25 July, in the NZDA rooms in Dannevirke.  Julia … END_OF_DOCUMENT_TOKEN_TO_BE_REPLACED