The tramp was planned for Hinerua Hut, Smith Stream, Waipawa River but we were stopped in our tracks by a locked gate. This was very disappointing because we have been trying to do this crossover for some time. So what to do with the day?

Looking over towards the main range, the weather was not looking good, with dark rain clouds and wind-blown showers coming down the valleys. The Wakararas looked clear, so we headed over to the Yeomans Mill car park. 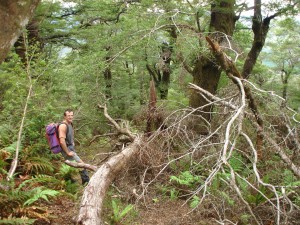 Two of the group decided to go up Parks Peak track, two went to the Yeomans track and the remainder headed off towards Dutch Creek. The Makaroro River was running a bit high and discoloured after recent rain and the water had obviously been very high, with lots of damage to banks and trees. It’s a reasonable walk along the forestry road until you reach Leatherwood road, where it is signposted to Poutaki Hut.

The track starts at the end of the road, crossing a log (or down and up) then there’s a short steep climb over broken rock reaching a couple of lovely beech trees that seem to hang over the edge, clinging on with their roots. The track then climbs through scrub, pine trees with open areas giving good views back to the main Ruahine range. It is well marked but could be cut again in some places.

At around 11am, we arrived at the trig, which sits at 1020m. The heavy rain clouds had lifted and the day was getting brighter. The wind was picking up, so we wandered down the couple of hundred metres or so to Poutaki Hut, which sits in a small grassy valley out of the wind. During a lazy lunch sitting outside and overlooking The Bay, we signed the hut book, took photos then returned back up to the trig.

The wind had got noticeably stronger, so we didn’t linger, making our way back down the ridge. It was very windy on reaching the last steep decent but all made it down safely. The group reached the car park at 2pm, surprised to find the rest of the party already there. It had been too windy on the Parks Peak track and they had been forced to return.

It was a good day out – even though it was not really where we had wanted to go.