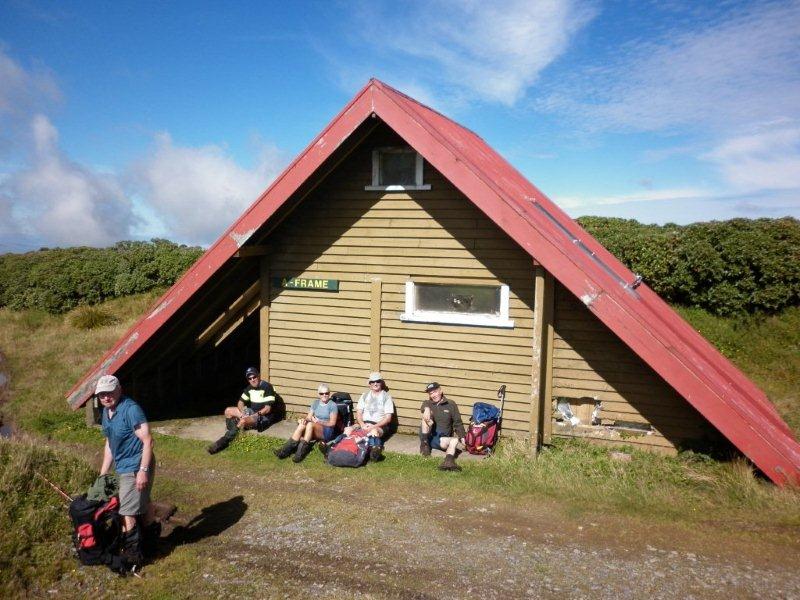 Would you believe it? It’s tramp day and there’s not a cloud in the sky! Quite a change from recent tramping trips. The Ruahine Range stood out against the blue sky as we travelled south down highway 50, turning off at Dannevirke onto Umutaoroa Rd left into Top Grass Rd, right at Tamaki West Rd arriving at the carpark around 9am. 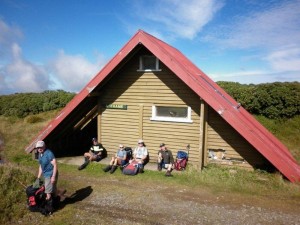 Looking up we studied the six hundred metre climb trying to pick out where the track goes then it was off to tackle the climb. It was new territory for many in the group and we were determined to get to the A Frame in good time. The track is in pretty good condition only a couple of deviations around fallen trees a bit muddy in places after recent rain. It does not take long to gain height with the steep climb and after some tricky rocky sections you emerge from the bush line into low scrub. From here there are some views back down and out over Southern Hawkes Bay but the track still goes onward not as steep but seemingly endless. Just as you think “it can’t be far now” and “I need morning tea” you reach Takapari Rd and 50metres on, the A Frame or Travers Hut. Sitting at just over 1100 metres it’s sparse inside and the concrete floor does not look that inviting for sleeping on. 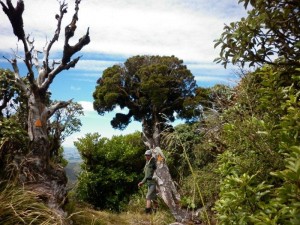 A longer than usual late morning tea while we waited for the last of the group to catch up, then carried on along Takapari Rd ( a well-kept 4 wheel drive road) turning of at the signpost to Stanfield hut. We passed the old track down to the river that is no longer open and had lunch on a sunny slope a bit further down. Great views to the west some cloud just covering Ruapehu but beautiful sunshine to the east. We were in a long corridor of Leatherwood the tough plant that grows along the Southern Ruahine Range. It’s a steep drop down to Stanfield, knee jarring stuff, but we made it and after a short break headed down the river. The Tamaki River bed is not hard to walk down but is full of Buddleia and a type of Wattle plus lots of logs washed down in recent times so a lot of crossings. It was hot and still so walking in the water was not bad. 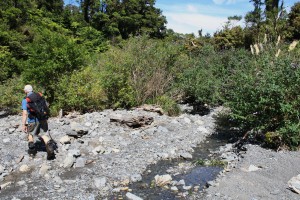 It was great to finally complete the trip as we had tried many times before only to be turned back by high winds or rain. It was a very quiet van that drove back to Napier with some very happy trampers!