Sixteen (including a visitor) set out from Yeoman’s Mill car park on Wakarara Rd for day tramps in the area. The majority headed up the Makaroro River to Barlows Hut. The weather was perfect and the river crossings never more than knee deep, so it was a pleasant start to the tramping year. 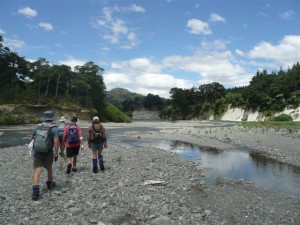 Most enjoyed a relaxed lunch at the hut while two went upstream a little to a waterfall on a side stream, and reported it to be worth the effort. Return was back down the river. The day concluded with a laid-back cup of tea as we waited the arrival of those who had gone further afield.

Others of the party who were not keen to have wet feet all day did the Yeoman’s Track (Thelma and Vic) or up the Parks Peak Hut track (Keith) either to the hut or dropping off down to the river and returning that way. So there was something to suit everybody.