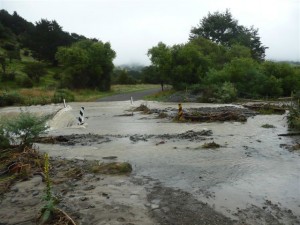 Our scheduled trip for the day was up the Waipawa River and over the saddle, but with the river in flood we knew this was not a runner. We set off to do Plan B ,“Sunrise and Beyond”. The forecast was for improving weather so we were hopeful of a good day in the hills. It wasn’t to be, however. Just short of the car park on North Block Road, we were thwarted by the Triplex Stream in flood. It had brought down a lot of rubbish and blocked the culvert. The stream (by now a river) was flowing around the culvert to the south and had obviously scoured out the road deeply.

Plan C. (It always helps to have a plan C.) We returned to Napier and did the Ahuriri Estuary Circuit. From the Mersey St car park, we headed west and across the old road/rail bridge before continuing west along the bank of the main drainage channel. Progress was slowed for a while by the discovery of big juicy blackberries. I soon got sick of being last and having to run to catch up. Then on around the estuary along the stop bank. 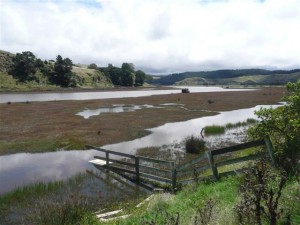 After lunch, we completed this section and climbed up to the Otiere Pa site, then to the lookout on top of Rorookuri Island, a DoC reserve. It’s just a short climb but provides good views south to Te Mata, back to Napier and out over Hawke Bay. From there, it was out along Onehunga Rd to the beach and return along the Pathway to Mersey St in time for coffee and an early trip back to Hertz.

I never thought I would hear it but, yes, near the end of the day there were some among us complaining about the terrain. Too flat. How can that be? You will never hear that complaint from me. Nobody would have been overwhelmed by the vegetation – except, that is, for the aforementioned blackberries. Walking through chest-high grass and fennel doesn’t do anything for me. But we did see flocks of estuarine birds including spoonbills, and the ever-changing views over the estuary itself.

As Plan Cs go, I reckon we had a pretty good day and the weather forecast was right: we didn’t need our raingear at all.