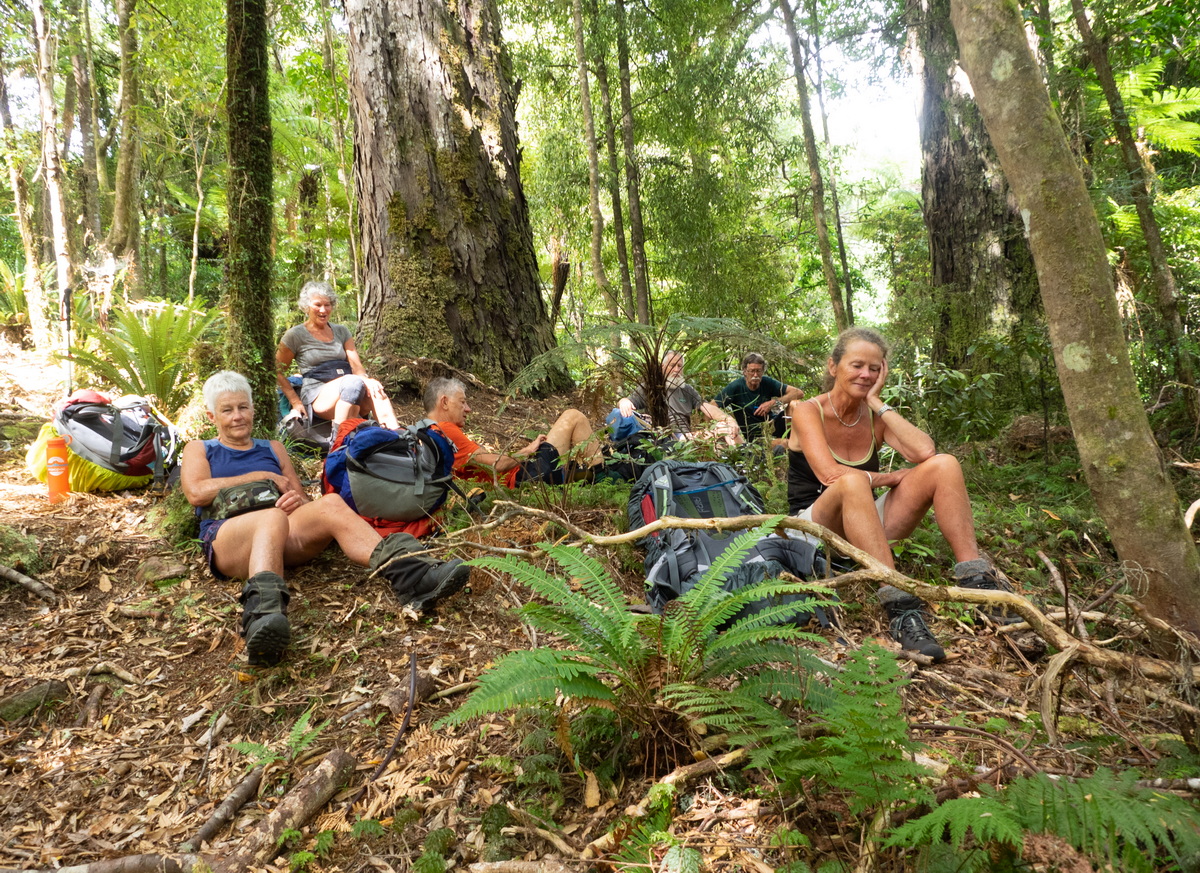 Banner Photo: Are we there yet?

The club has in recent years visited Waihaha Hut as a one-night stay in the Pureora Forest but this time we wanted a bigger challenge. We walked from the northern side of Mt Pureora in a more or less straight line to the southern end of the forest, over four days.

Day 1
Our journey began on Wednesday morning in Kuratau on the western shore of Lake Taupo, where we left cars and got a shuttle to the start of our walk on the Link Track in the Pureora Forest – very close to the centre of the North Island.

The view from Mt Pureora with Lake Taupo on the horizon

We did a gentle climb on an easy track to the top of Mt Pureora (1165). The wind was blowing a wee bit, but we had 360-degree views, including Lake Taupo to the south-east, before descending on a shortcut, an unmaintained track connecting to the Timber Trail. Then we headed down 2km of the Timber Trail and back into the bush to the prestigious four-bunk Bog Inn Hut for the night. Full of character, this small hut was built in 1960 to house scientists studying the nearby mountain mire known as ‘The Bog’. Half of us tented, and it rained lightly that night. 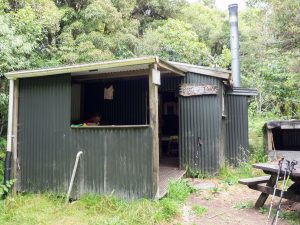 We had covered 9km in four hours, a great start – but no indication of what we were in for the next day.

Day 2
This is when the adventure really began. Our trail was originally part of the Te Araroa which, after it got diverted to the Timber Trail, is no longer being maintained by DoC. We were heading south to Waihaha Hut – approximately 23km away on a track that at times had disappeared under tree-fall, debris, pig fern and other obstacles that made it slow going. 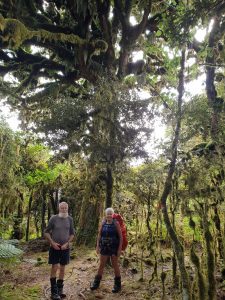 Admiring the many large totara trees

Along the way, we were treated to the song of the long-tailed cuckoo and kaka, among lots of huge old rimu and totara trees. There was also the New Zealand Mountain Holly (Olearia macrodonta) in the alpine scrub on the day’s highpoint Weraroa (1088) where we stopped for our lunch break in sunshine. The track then heads downhill to join the 3W junction (Weraroa, Waihaha and Waihora). 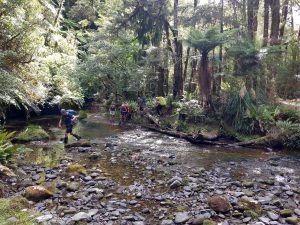 Ten and a half hours after leaving the hut (the DoC sign predicted nine) a very weary bunch hobbled into their next night’s luxury accommodation. Along the way, Sue developed quite an attachment to bush lawyer and made a point of getting acquainted with as much of it as possible, arriving at the hut looking a complete bloody mess – very impressive!

Day 3
After the previous day, our seven and a half hour walk covering 16km was a bit of a doddle starting alongside the Waihaha River. We were all tired and still had some gruelling uphills to challenge us to reach the top of the Hauhungaroa Range. This part of the track, while also not maintained, was a lot less overgrown and easier to navigate. 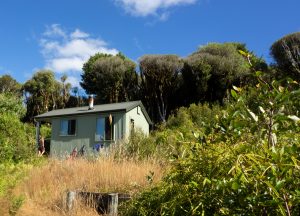 Hauhungaroa Hut in sunshine for us

Our destination for the night was the five-star Hauhungaroa Hut which slept six, so our intrepid leader decided to ditch us and go glamping (well, actually, to sleep in his teeny weeny tent). We had arrived at the hut in the early afternoon sunshine, and so we were keen to relax and chill, enjoying the views over the Pureora Forest.

Day 4
This was another stunning day to finish the last stage of the journey; according to DoC, it should take two hours to walk 7km, but it took us three and a half. Yet again the DoC signage was completely wrong and misleading. As we were nearing the end of the track, we spotted loads of ripe blackberries and had a good scoff while running to catch our shuttle.

The shuttle service was provided by Tongariro Adventures, based in Kuratau. Without their logistical support, this end-to-end tramp would not have been possible. Barb and Mike deserve our thanks for a great and friendly service.

A great time was had by all with lots of fun, laughter and banter. Characters who appeared in this episode were: Bruce Hodgson, Alison Greer, Simon Hill, Julia Mackie, Les O’Shea and Sue Martin, with a cameo appearance by Mandy Cunningham from Covid Capital, who also wrote the story 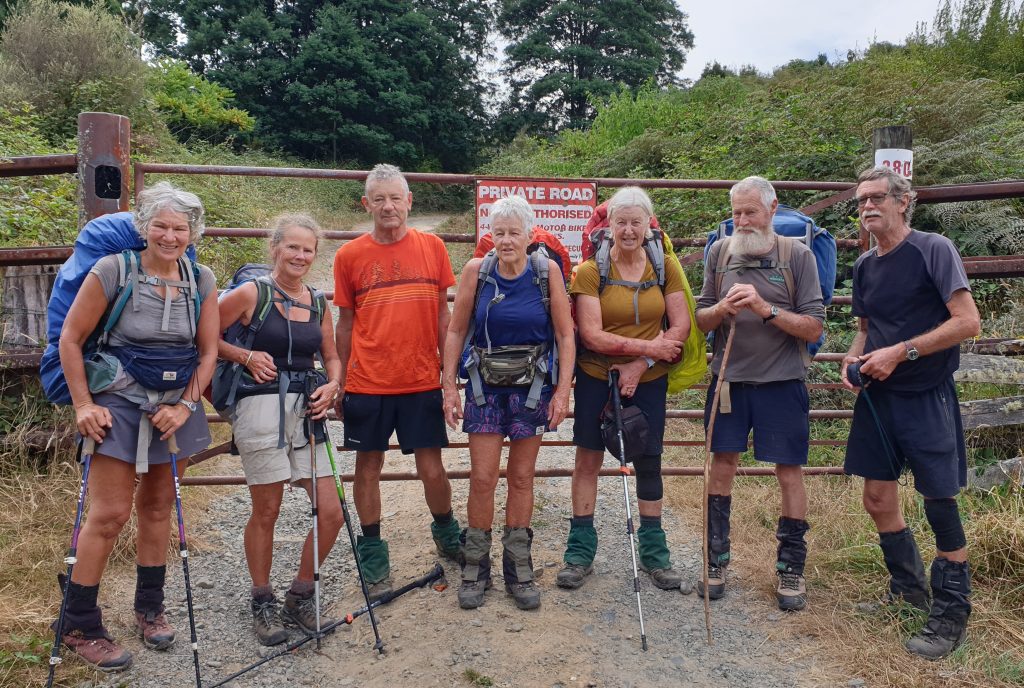 Aranga Hut On Saturday 14 January the tramp was changed to a loop in the Northern Ruahine Range. … END_OF_DOCUMENT_TOKEN_TO_BE_REPLACED

Aranga Hut On Saturday 14 January the tramp was changed to a loop in the Northern Ruahine Range. … END_OF_DOCUMENT_TOKEN_TO_BE_REPLACED