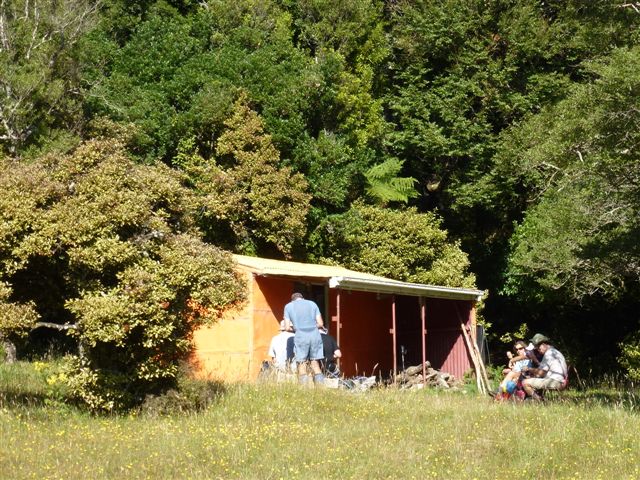 John and Vic did their own thing for the day, but the rest of us went to Happy Daze Hut across paddocks, through the river and over farm tracks. It took an hour to get to the hut. The hut was nice and clean, with kitchen chairs, so we took them outside to sit on and had morning tea.

We carried on along a track down to the river, and along it. Then Peter lost his hearing aid and went back to look for it. Now there were seven of us. 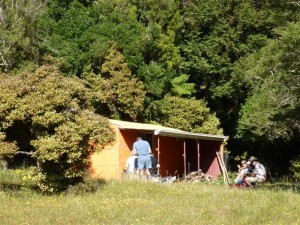 We looked along the left fork, but didn’t find any tracks or markers, so we decided to go further up the right fork and found a cairn and then a bit further on the markers and track up to the Makaretu Hut. We had lost two people and there were now only five. Jennie and I whistled and called out to Ken and Kelvin and got a couple of responses, but they didn’t get to the hut.

We ate lunch and then went back to the forks where Ken and Kelvin were having lunch. We set off back down the river and when we got to the turn-off to Happy Daze Hut, three decided to carry on down the river and the rest of us went up past the hut. We all met up at the last river crossing, having picked up Peter along the way. 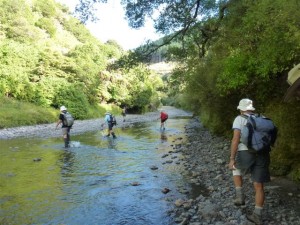 As we left the river to go back to the van, three got ahead and carried on along a track to who knows where. They had missed a turn in the track. The rest of us got to the van, changed, had some food and drink and a lie in the sun before the other three turned up.

A couple of the party had swims in some lovely pools. It was a great day, with a lot of laughs.

Sparrowhawk bivvy, Ruahine Forest Park, Saturday 6 August 2022 Banner Photo: The view east, towards the Wakararas and beyond On a beautiful … END_OF_DOCUMENT_TOKEN_TO_BE_REPLACED

Prologue: The author was on the Whirinaki tramp, reported on this website under the headline 'We observe a mock turtle and the rodent of Upper Te … END_OF_DOCUMENT_TOKEN_TO_BE_REPLACED

Ruahine User Group A meeting was held on Monday 25 July, in the NZDA rooms in Dannevirke.  Julia … END_OF_DOCUMENT_TOKEN_TO_BE_REPLACED

Ruahine User Group A meeting was held on Monday 25 July, in the NZDA rooms in Dannevirke.  Julia … END_OF_DOCUMENT_TOKEN_TO_BE_REPLACED

Ruahine User Group A meeting was held on Monday 25 July, in the NZDA rooms in Dannevirke.  Julia … END_OF_DOCUMENT_TOKEN_TO_BE_REPLACED

Ruahine User Group A meeting was held on Monday 25 July, in the NZDA rooms in Dannevirke.  Julia … END_OF_DOCUMENT_TOKEN_TO_BE_REPLACED