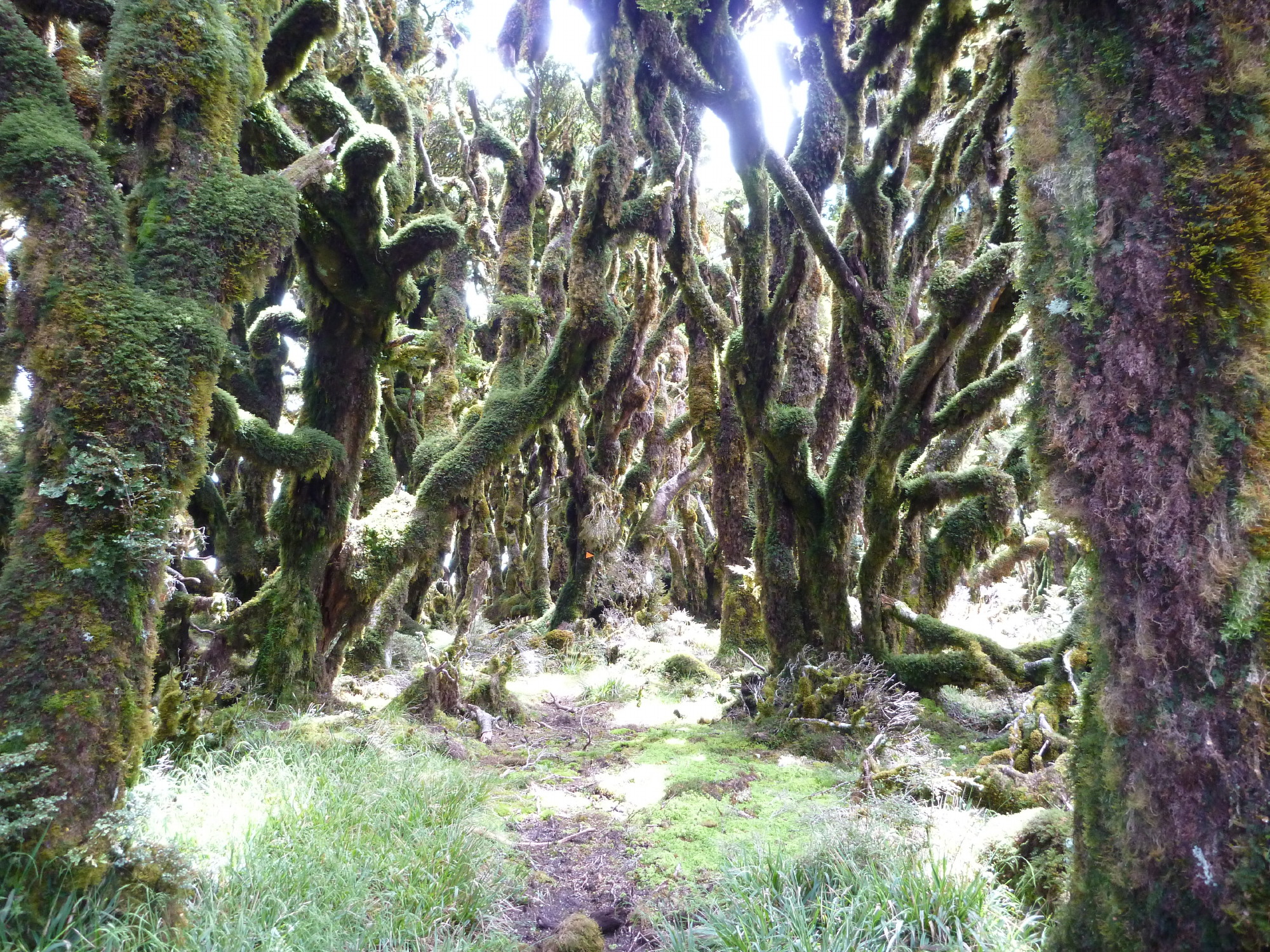 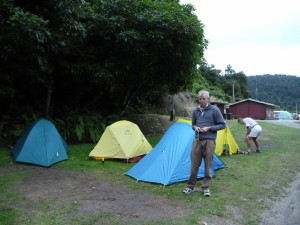 Five of us planned to complete a three-day circuit in the Urewera National Park. Geoff and I had not done the Mt Manuoha Track, while the three others had done it some time ago (10 years, perhaps). This is a bush walk extraordinaire. 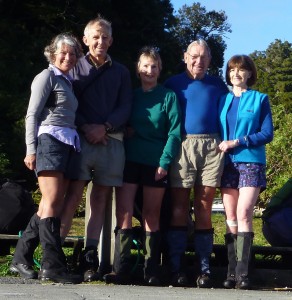 Our Waitangi weekend began with the drive up to the Waikaremoana camp ground, where we pitched tents on Friday night. The next morning, we were woken to a very loud native bird chorus, which lightened the heart. So it was strange to see a stoat scampering around the toi-toi near the shop/office. There are 20,000 of them in the park, said the manager – a portent of the silence to come. 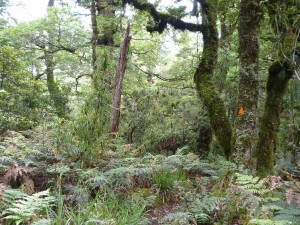 A shuttle picked us up and took us to the start of the Manuoha tramp. It is off SH38, on the true right of the Waiotukupuna Bridge (SH 38), 16 km west of the Aniwaniwa Visitor Centre.
The track starts with a climb up to a ridge, through dripping-wet bush. If you didn’t have a leg wash this morning, you needn’t have worried. One other tramper in the shuttle was also going our way, Jim from Gisborne. After the initial climb to the ridge, the walk is easy, passing through silver and red beech forest, with an under-storey of ferns and patches of dracophllym. Jim showed me where deer have already begun to rub the side of trees, a little early for the roar. As he was planning to walk as far as he could to Sandy Bay Hut, we parted company.

On reaching some major slips, it was possible to get a good westerly view and time for lunch in the sun. Shortly afterwards, the track emerges from the bushline and you reach the summit of Mt Manuoha, the highest peak in the National Park, with views of Lake Waikareiti and Lake Waikaremoana. The hut chimney is also visible, and only three minutes away from the trig. Surprise, Jim was having a break in the sun, too. He thought he could see Ruapehu from the trig and took a bearing. I wonder if he was right? He left soon after, and the rest of our party arrived. 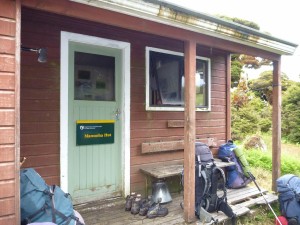 Manuoha Hut is a six-bunk hut in dire need of a facelift and repairs to the verandah, and behind it sat a temporary hut which Ted told us would have been helicoptered onto the site. Another couple arrived, so Geoff opted for taking a mattress and sleeping on the verandah of the temporary hut. We dried our wet tents on the line, as they had a lot of condensation on them from the morning dew at the campsite. With time to enjoy the afternoon, we went back up to the trig to take more photos, and tried to get cellphone coverage. No go. We had a relax in the sunshine on the track out of the wind, and looked at the tops of all the trees and their green variations. You felt that you could just hop on them. We all took photos of the ‘Goblin forest’, old gnarled trees hanging with moss and lichen. They certainly do look rather Tolkein. 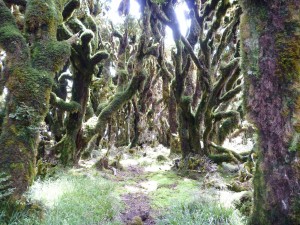 The next day, we headed for Sandy Bay Hut, leaving at 8am. The DoC track time is eight hours. The track begins the descent, through more Goblin forest, and then undulates. At the high point 1138, a gap allows a view of Lake Waikareiti. This is the only one you get before you arrive. 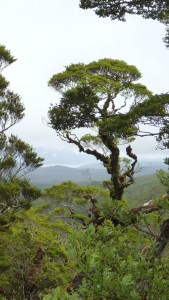 The track is well marked, with old tin markers that help in navigation through some dense ferns in parts. After three and half hours, it drops down to the Kaipo Lagoon, where there is a flat area which has been used for camping. From the lagoon, there is a well-defined track down to Sandy Bay Hut. The track meanders past Sopps Hollow, Lake Henrietta and the Clay Patch which, along the lagoon, make up “The Tundra”. From above, it looks like the dried pig fern. The weather had been fine when leaving Manuhoa Hut, but after an hour or so, a light drizzle started. Not enough to put the raincoat on. 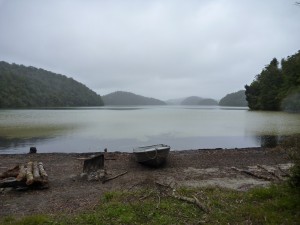 I arrived at Sandy Bay hut at 1.15pm, the drizzle was a little heavier, but still nothing to worry about. I had completed the day’s walk in 5hrs 15 mins, not even running (honest, running is not possible with a 16kg pack). Time for lunch and a swim. You have to walk a fair way out in the bay, but 60cm of water is enough to have a lie down, enjoy the views and have a splash. The rest of the Napier Tramping Club team – Simon, Paul, Jude and Gillian – arrived to spend the night at Sandy Bay Hut along with Ted, Sue, Denise and Geoff from Manuoha Hut. A joyous reunion and news from Jim. Many thanks.

More swims, and Geoff and Jude borrowed a dinghy and rowed to the island to look at its lake. There is a ladder to assist the climb up the rockface. 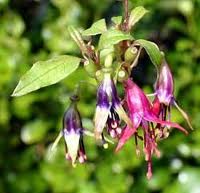 The Manuoha five pitched tents in the bush, about 100m past the hut. We had no hut booking, and prefer the quiet anyway. It rained during the night, on and off, but we all survived, albeit with wet tent flys.

The walk back to SH38 passes some lovely big beech trees and, in some sections, there are glimpses of the lake. From the shelter, there is an easy downhill walk to the end of the track, 200 metres west of the visitor centre. This section passes through beech, kamahi and tawari with horopito, wineberry, putaputaweta and five-finger below. Kotukotuku, the world’s largest fuchsia, can be seen from the track and I found some of its dark red flowers on the track. The flowering time is around November.

We all enjoyed great bush walk over the three days, seeing the big variety of lush bush and forest in the Urewera National Park. Well worth the visit.