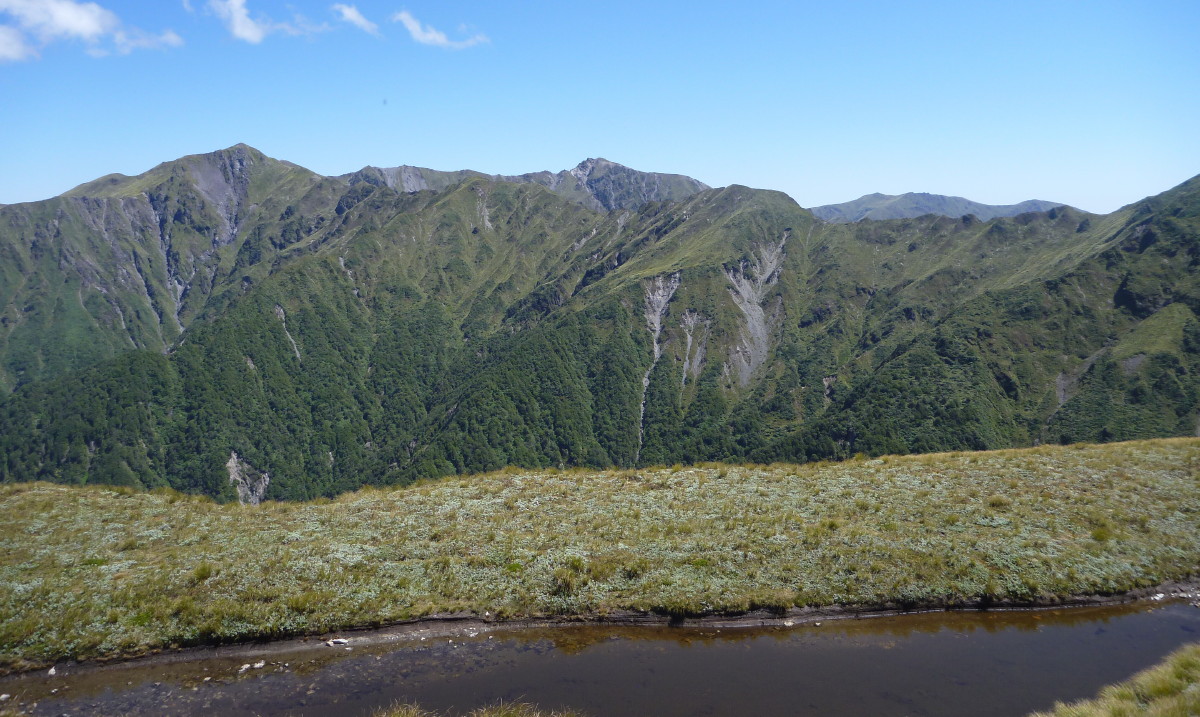 We checked the weather forecast and decided to put back our trip one day, as the pattern indicated that Sunday would be perfect for crossing the Sawtooth Ridge. Alison and I had had this tramp on our lists for years, but were waiting for the right weather and time. Les had tramped the Sawtooth a year ealier with Geoff, so knew what to expect. No problem for the girls, he said. 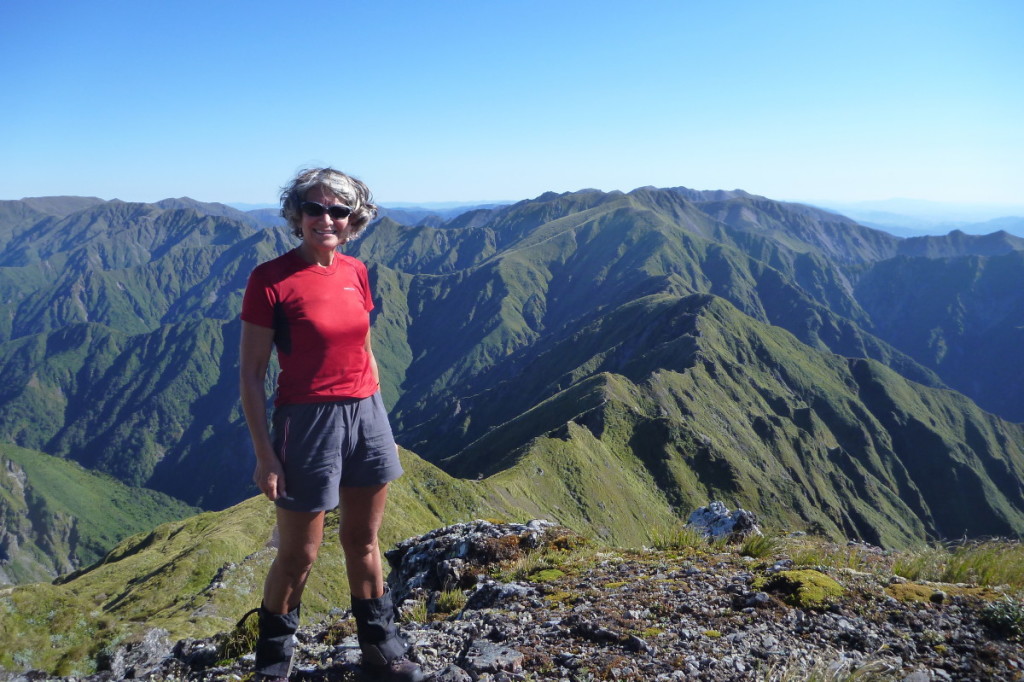 He was right. The Sawtooth has a reputation, but I think that it is a bit overegged. Yes, it looks daunting but, in the right conditions and with plenty of time, we ‘knocked this one off our lists’.

On the Saturday, we started from Kashmir Road car park for Daphne Hut. This is the quickest way to get to Howletts Hut, and save energy. Ali and I took sandals which we used when travelling up the Tukituki River for the 15-20 mins, to get to the bottom of the Howletts Hut track (Daphne Ridge). We changed back into our boots and stashed our sandals again, to be picked up on the way back. We did this because we did not want to have wet and heavy boots on the inward tramp. The hike up the ridge to Howletts Hut is gut-busting for the first 30 minutes, but then it gets easier and I reached Howletts in 1hr 40 mins. The last half hour is above the bushline, and with that comes the views south of the ridge line route to Longview Hut. 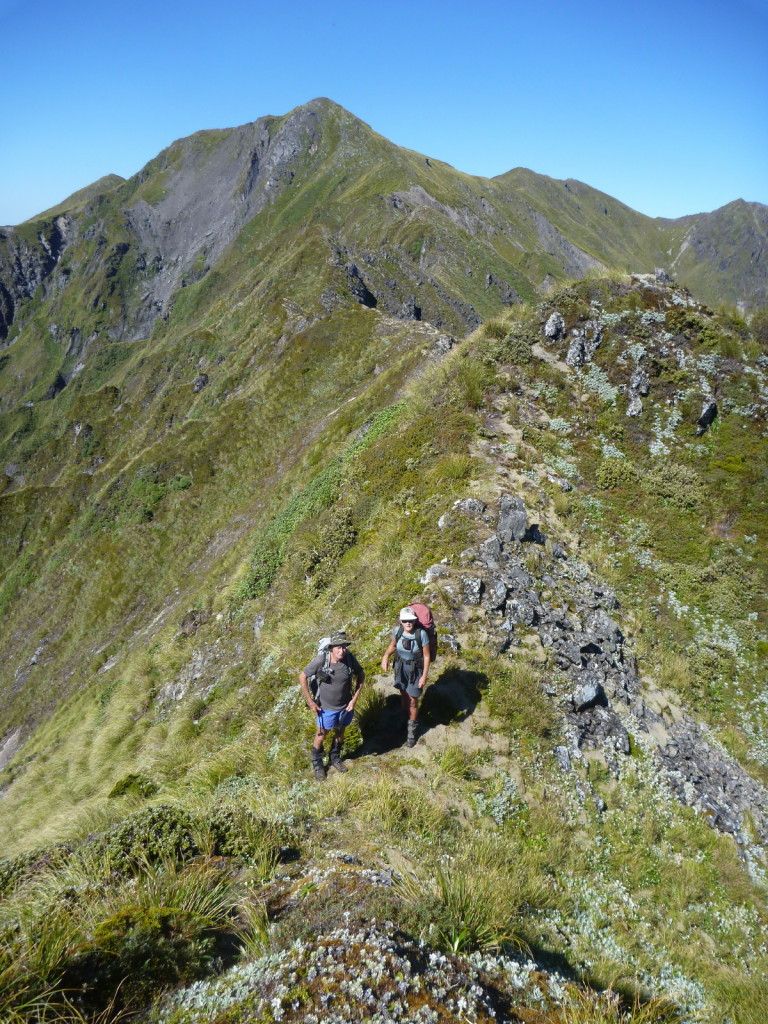 We reached Howletts Hut in the early afternoon, relaxed and talked to two young guns from Auckland who had come up the river from Mill Road. This had taken them much longer than the trip times indicated by DoC. We agreed that coming by that route was very slow as there was a lot of water in the river. We had tramped the Mill Road to Rosvalls track tops a few months earlier (the east to west section up to high point 1285 of this track) and it took us two hours just to get from Mill Road to that track junction. Not recommended.

On Sunday, the weather as forecast was perfect. We headed up Tiraha, reaching the top in about 80 minutes. We gazed at the Sawtooth Ridge in wonder, noting that there are sidle tracks on some of the rocky pinnacles. It really is not that difficult; however it was a hot day, and I recommend that you take plenty of water. We needed it when tramping up the northern section towards Ohuinga.

We had to have a few stops along the way, just to get the heart rate back down again. But when we reached the easier northern part of the ridge, we took a longer break and checked out the views back to Howletts Hut.

We still had to tackle the transfer onto Black Ridge, which we achieved by sidling across just below the top of Ohuinga. It avoids a rocky scramble at the top, and you can get onto Black Ridge easily, albeit above the slips. The ridge then opens and flattens out, and there are tarns for water.

We stopped and had a wash and swim in the large tarn, just before the last hill before Tarn Bivvy. Highly recommended, and great fun. We reached Tarn Bivvy and had it to ourselves, enjoying the afternoon sun.

The tramp had taken about seven hours including all our photo and lunch breaks – a lot longer than the 5hrs posted in Howletts Hut. Perhaps this time did not include breaks? 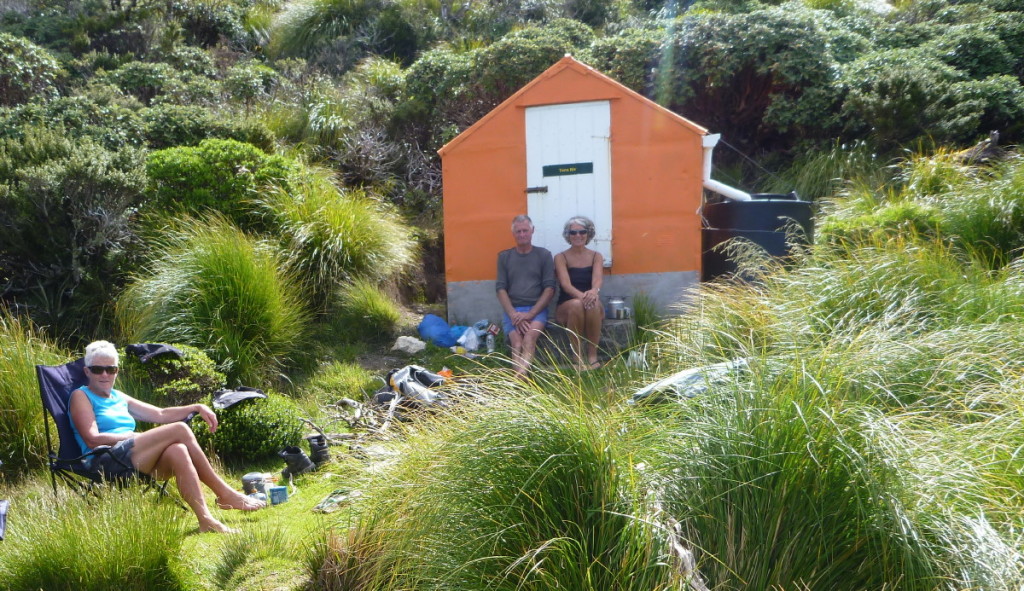 Chilling out at Tarn Bivvy

On Monday morning, we prepared and started to head off to the tops, planning to go down Rosvalls track to Daphne Hut, pick up our sandals and head out. We did not even get to the ridge line, as the wind was too strong, so we retreated back to Tarn Bivvy and decided to wait it out, hoping that it would decrease later in the morning.

After a few brew-ups, and climbing back into the sleeping bag to keep warm, at around 11am we gave it another try. Success! It only took 30 minutes to reach the bushline just beyond 1258, and from here on we were in the protection of the bush.

We got down in an hour, and then after collecting our sandals, headed down-river again. We did not mind getting wet boots this time, as we were on our way out. At the start of the hill climb, we had a lunch break and took the boots off to wring out the socks and empty as much water from the boots as possible. The chug uphill and back to the car park, which we have done many times, ended what had been an interesting day. We have never been stuck in a hut before, so that was a first, as was the Sawtooth Ridge.

Would we do the Sawtooth again? Yes, but we have set our sights on Broken Ridge and a tramp from Waterfall Hut through to Hinerua Hut which is now on our ‘to tramp’ list.

As for Sawtooth Ridge, it was an awesome sight and we have finally ‘knocked the b…..d’ off.

Aranga Hut On Saturday 14 January the tramp was changed to a loop in the Northern Ruahine Range. … END_OF_DOCUMENT_TOKEN_TO_BE_REPLACED

Aranga Hut On Saturday 14 January the tramp was changed to a loop in the Northern Ruahine Range. … END_OF_DOCUMENT_TOKEN_TO_BE_REPLACED