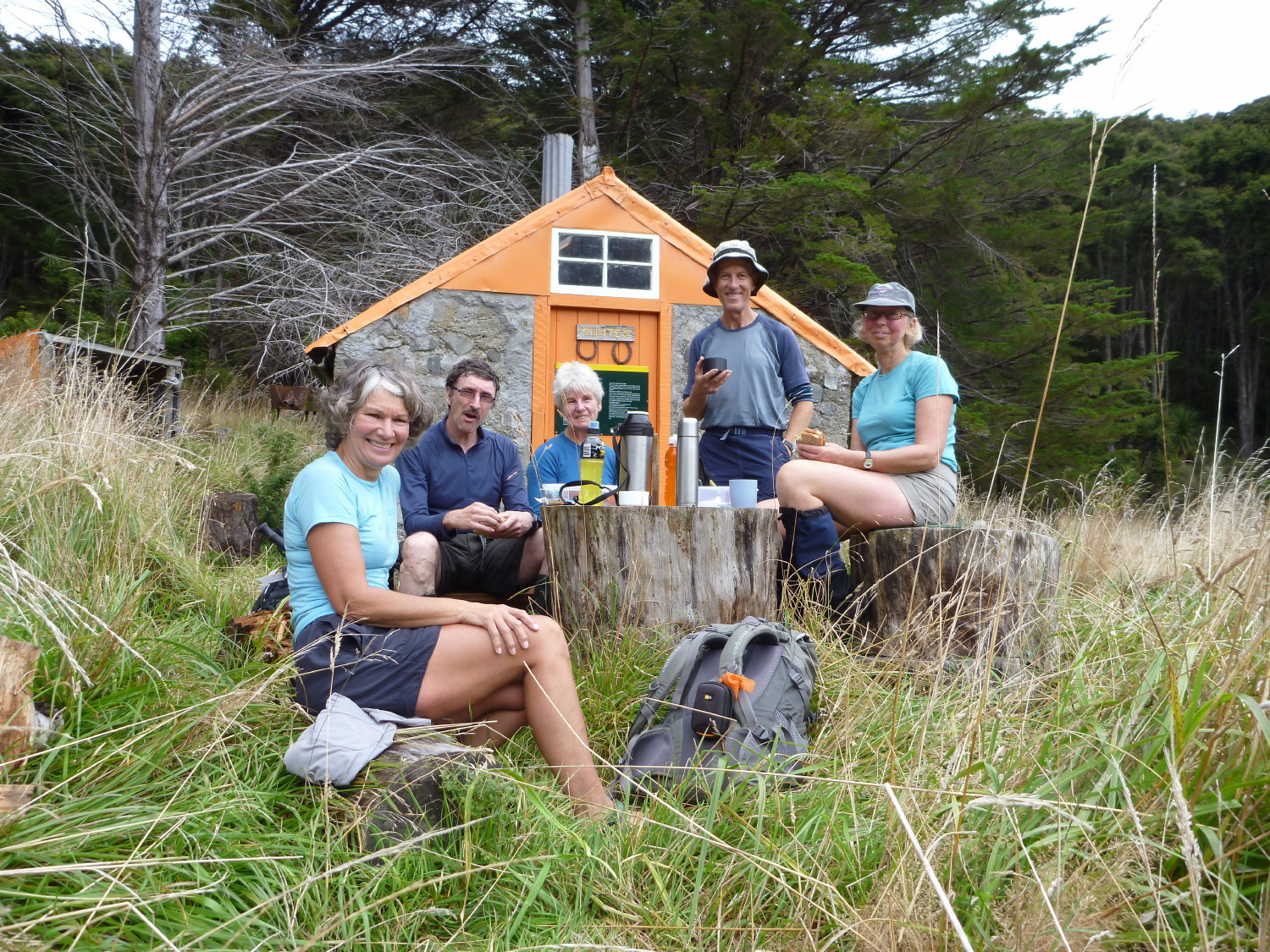 With many away to Mt Ruapehu for the week, only five set out for the day tramp to Shutes along the Taihape Road, just past Gentle Annie.

The day started out a bit drizzly but it was mild with no wind, driving along. The turn-off road is no longer marked with any signage and with talk of heading to the nearest coffee shop in Taihape instead, the road was passed until a couple of kilometres later, farmland appeared, meaning a U-turn was necessary.

The road in to the Comet was in good order and we set off at 8.45am. It was good to see the new DOC signage at the start. The track is in good condition and before long we zig-zagged our way up onto the plateau and through the wilding pines. No drizzle at all and gradually the sky revealed a few blue patches. The patch of beech forest was a pleasant contrast, as were the numerous spotted orange mushrooms. 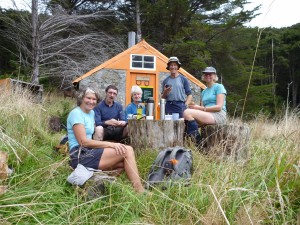 Then the big descent down to the Taruarau River, seemingly endless, but uneventful. The river itself was running clear and normal so only just over the knees at the crossing.

Then the traverse up and around and through the grassland to Shutes Hut. This section a tad damp and slippery at times. We made very good time, arriving at the hut at 11.15am or 2 hrs 30mins, or at least 30 mins shorter than the DOC signage indicated. As the conditions were now rather nice, we had some group photos and used some huge cut logs for a picnic table just in front of the hut. Jude read us some entries and stories from both hut books and we reacquainted ourselves with the history of the hut and the area. The hut is unique in being stone built and from the stock droving days. It was constructed in 1920 and makes for a very comfortable place, being in great order and tidiness.
Around noon, we set off to retrace our steps, but not until we had researched all the other track and hut options we could do from here, such as Diane’s or Ruahine huts. 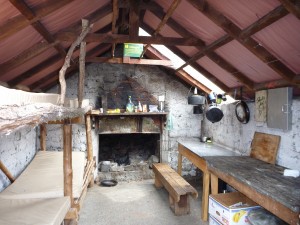 Julia had taken her boots off to cross the river and had on sandals; she was pleased to find her boots exactly where she left them.

Then the steady grind up, up, up. No issues encountered, very little birdlife, still no drizzle or wind, so overall ideal conditions.

In fact, we were back to the Comet and the van in 2hrs 40mins, so a marvellous effort really. The three who have entered the Triple Peaks Challenge race next Saturday certainly got a good workout too!

The clagginess and hint of drizzle remained at the Comet, however.

Four of the party decided a coffee or similar refreshment at Taradale’s Duke of Gloucester was a fitting end to a very pleasant and sociable group tramp.

Sparrowhawk bivvy, Ruahine Forest Park, Saturday 6 August 2022 Banner Photo: The view east, towards the Wakararas and beyond On a beautiful … END_OF_DOCUMENT_TOKEN_TO_BE_REPLACED

Prologue: The author was on the Whirinaki tramp, reported on this website under the headline 'We observe a mock turtle and the rodent of Upper Te … END_OF_DOCUMENT_TOKEN_TO_BE_REPLACED

Ruahine User Group A meeting was held on Monday 25 July, in the NZDA rooms in Dannevirke.  Julia … END_OF_DOCUMENT_TOKEN_TO_BE_REPLACED

Ruahine User Group A meeting was held on Monday 25 July, in the NZDA rooms in Dannevirke.  Julia … END_OF_DOCUMENT_TOKEN_TO_BE_REPLACED

Ruahine User Group A meeting was held on Monday 25 July, in the NZDA rooms in Dannevirke.  Julia … END_OF_DOCUMENT_TOKEN_TO_BE_REPLACED

Ruahine User Group A meeting was held on Monday 25 July, in the NZDA rooms in Dannevirke.  Julia … END_OF_DOCUMENT_TOKEN_TO_BE_REPLACED