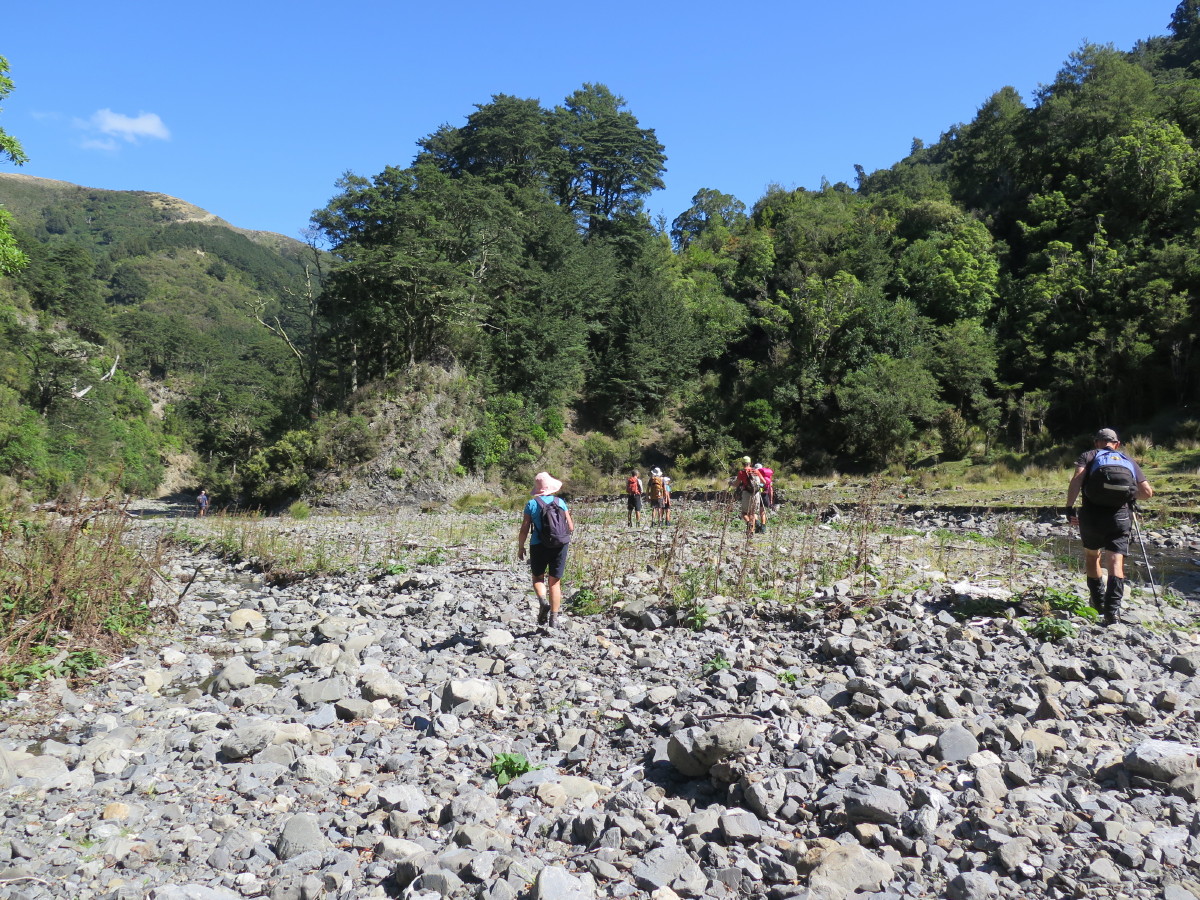 This tramp blessed us with many experiences. It was not a ‘ho-hum, get the job done’ sort of day.

Norsewood has a reputation for being one of the coldest spots in Central Hawke’s Bay. On this tramp, the Apiti Track had no breeze, a blue sky and a very comfortable March temperature. Fourteen of us frolicked our way up the easy-grade track and, in the still air, I’m sure the folk of Dannevirke about 20 km away would have thought they could hear a dawn chorus.

The blokes (who were in the majority for a change) managed to pull ahead for some solitude. This group included Rosemary because, on the day, we considered her an honorary bloke. 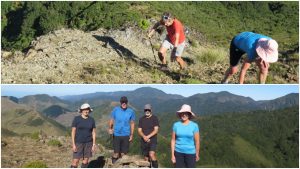 We stopped for a drink and a bite to eat in a clearing below the unnamed peak 880m shown on the topo map. Feeling fresh, some of the group took a quick detour to the top for a view. The others enjoyed laying in the sun.

Our proposed lunch stop was to be at the track junction before heading down to the Mangatewainui River. Some had planned to turn back early, not wanting to complete the full circuit. 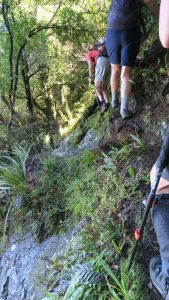 The track is falling away, requiring careful negotiation

The track to the junction is in very bad and dangerous condition. In parts, it is washed out, with unstable ground on a near vertical drop-off. The track gave way under Kate and she somersaulted several metres, stopping only after hitting a tree. She was shaken but surprisingly unhurt. After the adrenalin shot had worn off, Kate declared herself fit to carry on. Her sunglasses and walking pole were lost.

We had junction fever and were determined to press on. At one particular drop-off, we thought it was impossible to cross, but John Holschier managed first and choreographed the rest of us in foot placement while providing encouragement. What’s tramping if it doesn’t include a bit of nervousness and fear at times?

At one o’clock, we hadn’t reached the junction and our tummies were complaining. We were in need of fuel and stopped for a quick lunch in a nice shaded spot about 400m before the turn-off to the river.

The walk down to the river was fun and took one hour. The track was overgrown and with some tree fall.  Many of the orange track markers were buried on the fallen and decomposing trees. 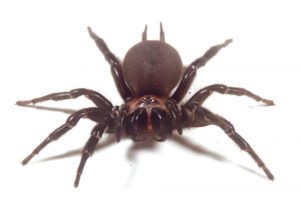 The culprit? It looked like this Black Tunnelweb Spider (Image: Te Papa)

Reaching the river was a little milestone, so we stopped to celebrate with a rest and a drink. I thought everything was going just fine until a blood-curdling scream erupted just behind me. Rosemary had seen a spider. But it wasn’t just any old spider. It was the biggest she had ever seen. Perhaps we’ll have to take back that bit about her being an honorary bloke. No one else saw the spider, unfortunately.

The section down the valley was a typical river walk, in and out with numerous crossings. The river was low but slippery rocks claimed one or two casualties. 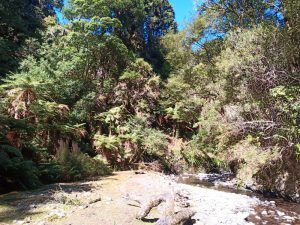 The healthy bush at the river’s edge

We were very impressed with the bush quality at this lower level. There are many huge rimu and beech trees, rare in the Ruahines. This pocket of bush seems to have escaped the axe. We turned left into Pat O’Brien’s farm; Pat had kindly given us permission to cross back to Ngamoko Road where Ted, Murray and Sue G had moved the vehicles for us. The farm walk was on an excellent metalled road for a couple of kilometres.

Thanks to Kelvin for organising this successful trip, although he was unable to come himself.