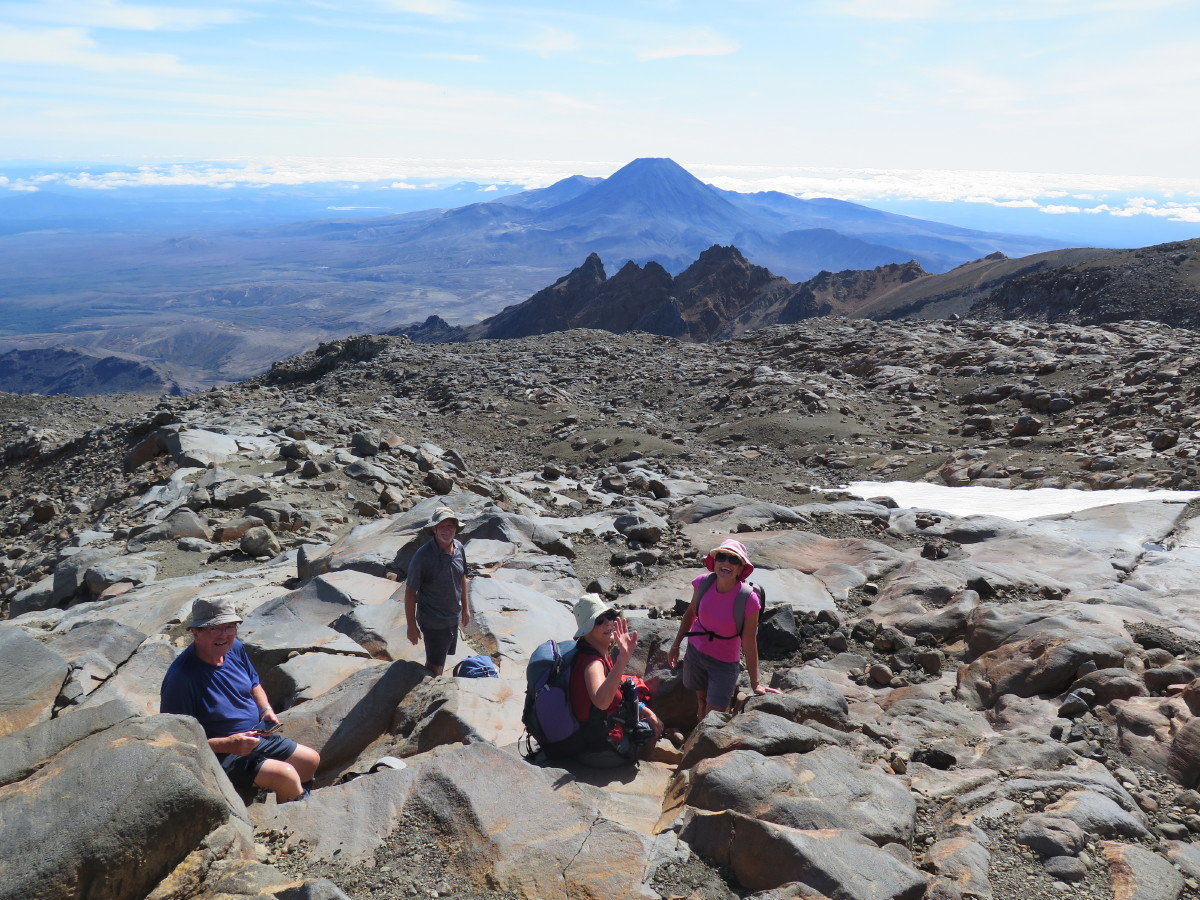 This year we changed accommodation from the Alpine Sports Club A-frame Ski Lodge, which had difficult access, to the Havelock North Ski Lodge adjacent to the loop road and Bruce Road car parks. Access was excellent.

The 13 members who went on this annual trip to Ruapehu had the use of the lodge thanks to the generosity of the Havelock club’s executive, as none of us are members.
The lodge is an excellent, well-equipped facility. There are 32 beds in eight bunk rooms, all on the second floor and warm and dry. There is also a warden’s single bedroom on the ground floor – grabbed by a certain life member, who shall remain nameless.

We were booked in for 41 bed nights in total, with most at the weekend. We self-catered and shared the purchasing and cartage of all the food items. Cost per night was $32 for accommodation and $12 for food. In total, excellent value for money. 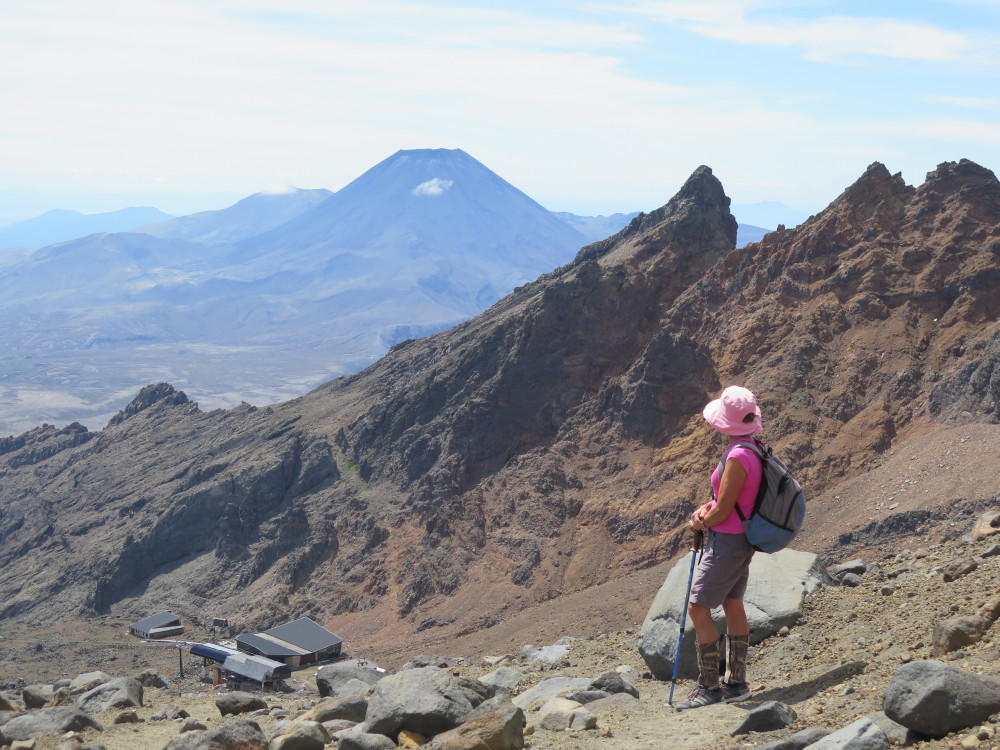 The new gondola lift inspected from above

Day 1: An exploding expansion tank in the cooling system of my BMW, halfway between Taupo and Turangi, put a dampener on what was a warm and sunny day. Gear was transferred to the other cars and Phil and I followed the tow truck back to Taupo. The car was left there with the hope that it would be fixed by Tuesday. This delay prevented any real activity in the afternoon, but some managed to inspect the Meads Wall and check out the new gondola lift.

Day 2: It started with fog, zero visibility and a forecast of rain clearing. So, after a slow start, we went to Taumarunui for a coffee and on the way back stopped at Owhanga to do the bush walk in sunshine. At the bridge over the Whakapapa River, there was a group of canyoners, fishermen, mountain bikers and 4WD vehicles – it’s a very popular location.

Day 3: It dawned clear, with little wind. The forecast was for the same. Nine of the group decided to go up to the Crater Lake. Six went up to the restaurant by way of the new gondola, and the other three went all the way on foot, led by Doug who knew a route from his Ski Lodge location. Six made it all the way, whilst three dropped off at various stages. 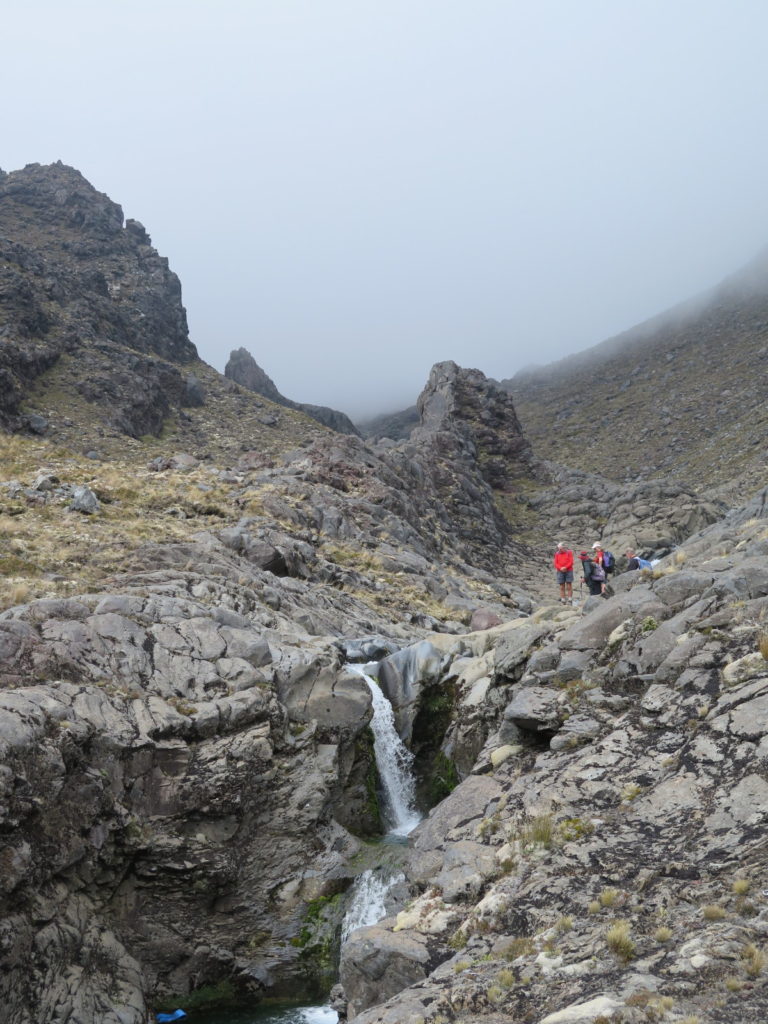 Day 4: It was another good start but the forecast was for showers in the afternoon. The main group went to the Taranaki Falls from The Chateau and then went off-track up the Wairere Stream with the intention of going to see the Saddle Cone, an extinct volcano that can be climbed inside, and a nearby waterfall that wasn’t expected to be too spectacular due to the dryness of the area. By the time we reached the point to go up and over a ridge, the clouds had lowered and visibility was limited. There would be no views from the top of the ridge. So it was decided to continue up the stream to see the cascades, an area of once-molten volcanic rock that the stream flowed over.

Day 5: Our final day, so it was clean-up and departure for the remaining six after an excellent stay. We stopped off in Turangi for our usual coffee at the Licorice Café and detoured into Taupo to collect the car, which was ready and waiting.