If half Plan A plus half Plan B is Plan C, then we did Plan C again. The day’s weather forecast was for a cold southerly front to pass through, but clearing in the afternoon. They were right with the first part.

Our mission (which seven accepted despite the forecast) was to transit the Maungaharuru Range from the Titiokura Saddle on the Taupo Road north to Pohokura Rd. We set off and climbed steadily mainly on farm tracks, keeping an eye out for the expected change in the weather. It hit after about an hour. We had been smart enough to have our full rain gear on in time. It was cold, driving rain and we were glad it was on our backs. Also we were not on the ridge line but out to the west and down a bit, so were not exposed to the wind’s full force. Our visibility was nil so the GPS was handy. At least we knew we were on the fold of the map!

Before long, we realised that it was not going to be much fun climbing up to the top of Taraponui in those conditions; the view would be zero and it could be hazardous. The decision was made to change our route and exit via Galbraith Hut and out through the farm on Waitara Road. Phone contact to the van crew was successful and they would come back around to pick us up. We reckoned we were at about the right elevation for the hut so continued to sidle round. With consummate expertise, we walked directly onto the hut. 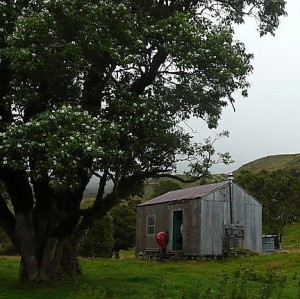 We were at Galbraith for an early lunch. It was great to be out of the elements for a while even if we didn’t really warm up at all, despite the fire that Manfred managed to coax into life. We enjoyed the ambience of this unique little hut with its wooden chandelier, pictures of Royalty decorating the walls and I noted a new rubber doorstop lovingly mounted to protect the doorframe. After lunch, we set off downhill at a brisk pace and soon warmed up. By then, the rain had eased but the cloud level was still down to just above the hut. I was glad we were heading down, not up. In no time we were back at the van. Those who had gone up through Bellbird Bush toward Bell Rock seemed a little smug about their decision.

We spent little time or energy checking on the fauna and flora but did note the clump of Hoheria Augustifolia trees adjacent to the hut were smothered in their starry white flowers.

Contents: NTC AGM is on Thursday May 5th. There will be supper after the meeting. Club Meeting … END_OF_DOCUMENT_TOKEN_TO_BE_REPLACED

Contents: NTC AGM is on Thursday May 5th. There will be supper after the meeting. Club Meeting … END_OF_DOCUMENT_TOKEN_TO_BE_REPLACED