Seven trampers headed off from Park Island with the prospect of a beautiful fine day in the hills. The forecast was good, the trip from Napier into the Kawekas looked promising with sunshine and little wind on the way. We reached the Makahu Saddle car park and geared up, with fine anticipation for a good day ahead.

Most of us were keen to get all the way to Back Ridge Hut: Gordon was planning on a lower level trip, Dorothy was definitely going to the top and see how she was going once there and Rob was new to us so had no idea what he would be doing. So we arranged to rendezvous at Dominie Bivvy if we got strung out en route and decide further strategy from there. 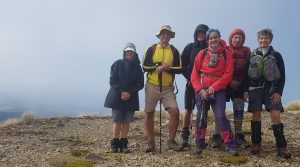 The six of us at the memorial cairn

Going up the path was fine with Keith leading the way, and we certainly appreciated not having to clamber over the narrow shelf due to the rerouting of the track by DoC some time ago. We noticed the wind increasing slightly with a cold edge to it but at the bivvy we were still in sunshine at the back of the hut, sheltered from the breeze; it looked as though all was going according to plan.

Dorothy and Rob had decided by then that they would get to the cairn but not look to climb down to Back Ridge Hut and out again, as it was a bit too far for a day tramp for them. The rest of us were keen to push on, however, and knowing that time was limited if we didn’t want the others waiting too long (three hours extra for the circuit), we carried on, leaving Dorothy and Rob in the sun.

Having left the shelter of that area, we found on making the steeper ascent to the top of the J that the cold wind was now so bitter we had to stop and layer up continually and ended up with winter jackets, hats and gloves. On reaching the top, cloud was spilling over from the western side and we started having doubts about how far we would get.

We made it to the cairn and stopped to take the obligatory group photo. By this stage, the western views had disappeared into complete white-out and we decided not to carry on to Back Ridge, get off the tops immediately and have lunch further down. Then Dorothy and Rob arrived, so we had to take the photos again. While we were doing that there was a break in the clouds so we set off on the Back Ridge track – just so we could show Rob the country from that side. 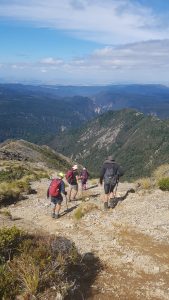 Heading down and out of the wind and into the sun

It was still quite windy with cloud coming and going so we decided to stick with cancellation of the circuit to and from Back Ridge. We did think about heading over to Kaweka North to see that end of the mountain, but by the time we got back to the junction, it was all white-out again and we opted to play it safe and head down.

So it was a much shorter day than anticipated, with arrival back at the car park before 2 pm after a stop at Dominie bivvy for lunch. On the way down, the weather got better and better so we shed all our layers and got back to the car park to hear from Gordon that the weather had been brilliantly fine all day! We still had an excellent day out in the mountains, enjoyed by all.