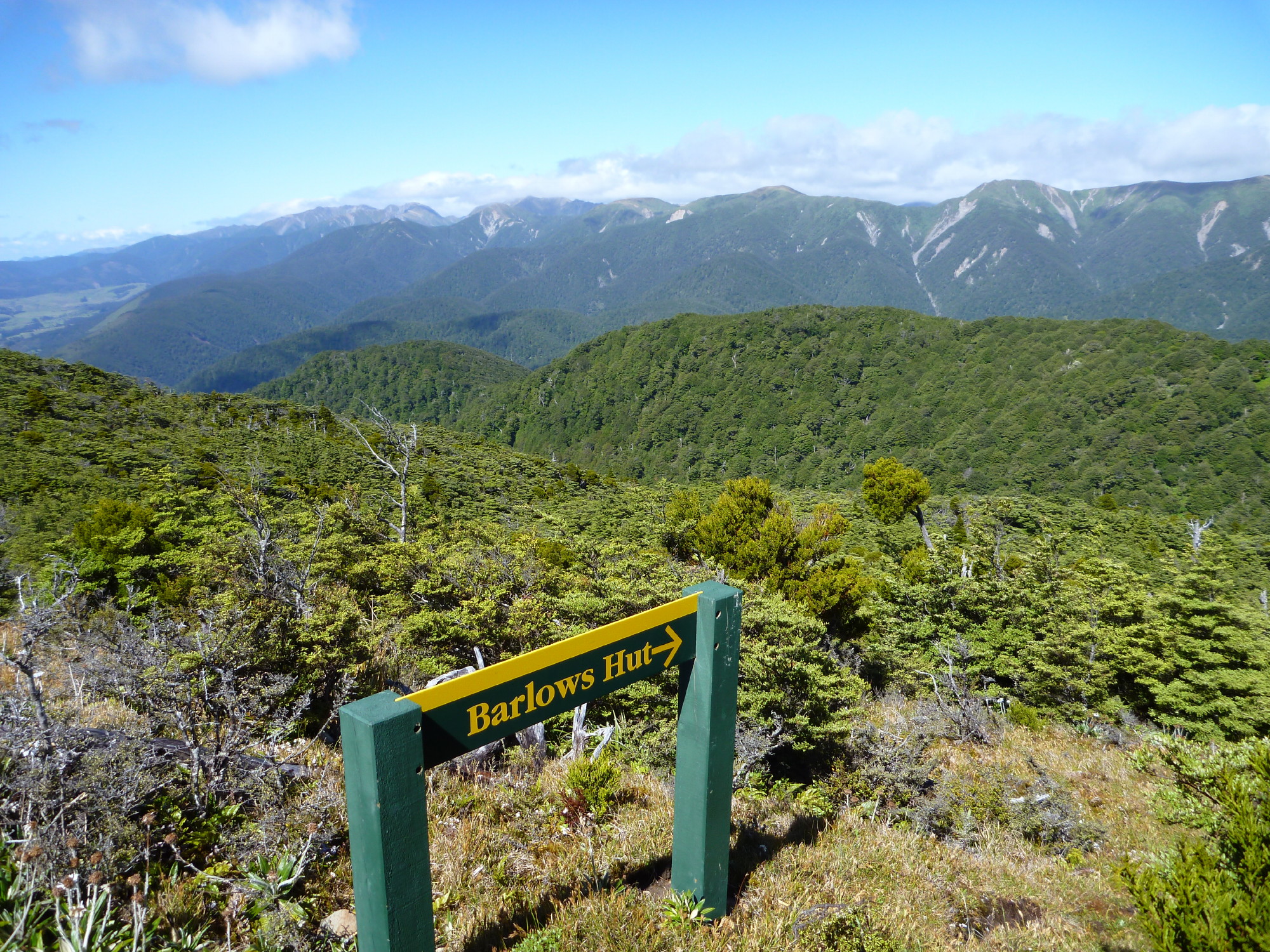 In another quest for the route from a high point on the Parks Peak track down to the Makaroro River and Barlows Hut, 12 trampers set off in a van from Napier early on a Wednesday morning. They travelled down Highway 50 and Wakarara Road to the historic mill site beside the Makaroro River. The last attempt to find this route was mounted on the 28 January 2012.

We had gone up the Makaroro River to Barlows Hut in February this year and noted a 500-metre-high slip which occurred a few years ago, running from almost the top of the ridge down to the river below. It had taken with it almost all of the steep hillside where our track had run down. 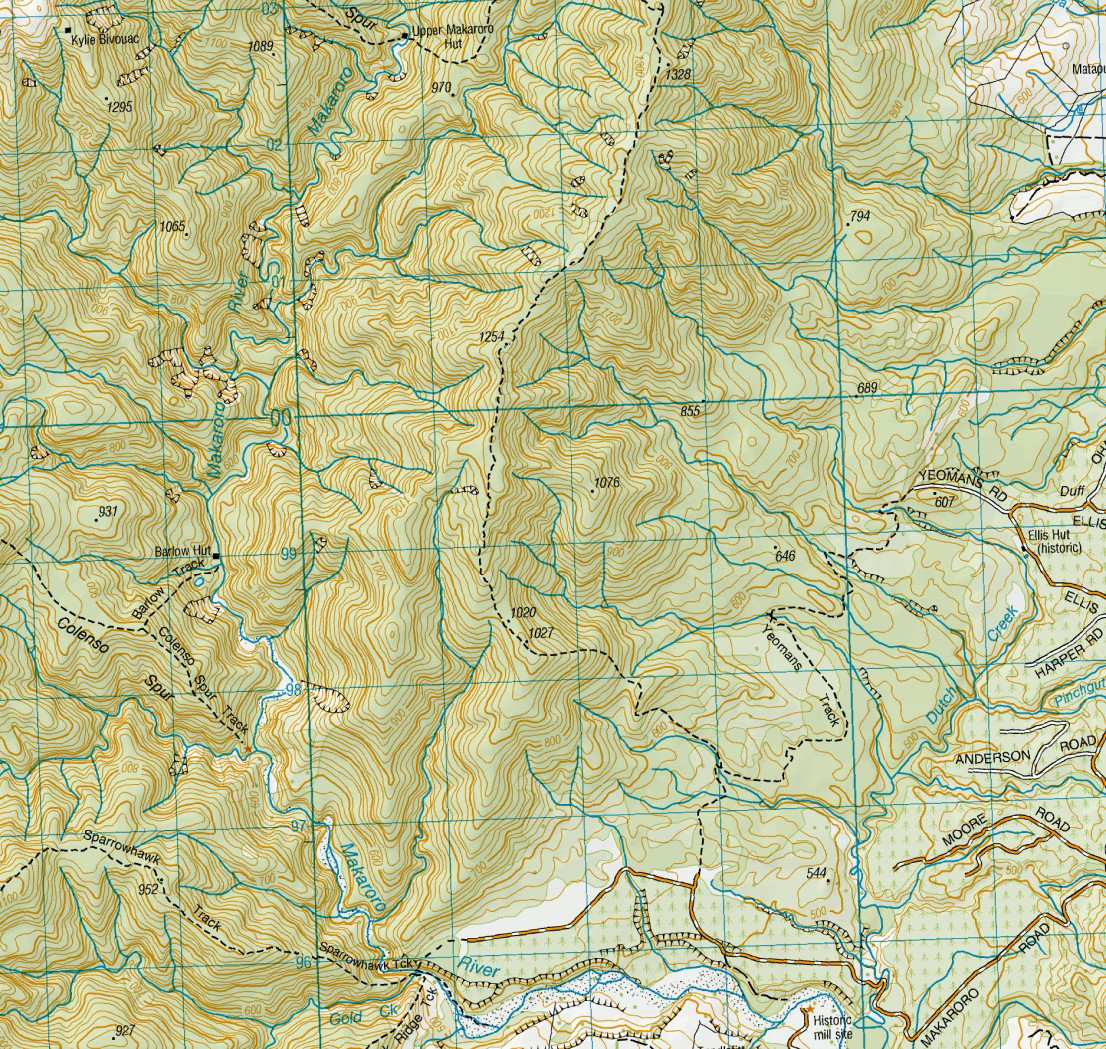 The current Topo50 Map, with the track still missing.

Could this intrepid group of trampers discover a route from the ridge to the river? To quote from the NTC’s BushBasher archive:
“On Good Friday 21st March 2008 some club members walked the route down to Barlow Hut describing the final descent as very steep, plus loose rock and moisture making progress difficult. The track exited not far from Barlows Hut.”

As on previous occasions, some opted to wear sandals to ford the river and donned their nice dry boots before the ascent up the track. Others coped admirably, crossing in their boots.

Vic spent the day wandering around the old mill site and improving his tan, while we travelled up the old logging roads and to the track leading to Parks Peak, then beginning the steadily steepening 500-metre climb to the ridgeline.

Kelvin, and later Ted, turned to lead separate groups back down, and then up along a road on the true left of the river beside a mature pine forest. Then down on a steep slippery bank to the Makaroro River. From there, they walked down the wide expanse of shingle on the river to the historic mill site and the van.

Gordon and John B got to around two thirds of the way up the track, then turned to follow the two other parties past the now dismantled Craig Hut site, with the pine trees to the left and then on an overgrown but marked track leading to the steep bank to the river. Once on the riverbed, we enjoyed a late lunch stop and walked down to the van. We noted that the sedimentary mudstone cliffs on the true right of the river were eroding and quite large tree roots had fallen (or shortly would) into the water.

John H, Simon, and Keith carried on up to the ridgeline but found no sign of a track down to Barlow Hut. Up there, the weather was fine, cloudy and with a strong westerly wind. They retraced their footprints back down to the van.

Coming home, we stopped for coffee and refreshments at the Tikokino pub.

Thanks to Kelvin for driving us down and back. On Church Road, he overshot the correct turning and delivered us to the drive leading to the cemetery. Having been told that we were not ready to go there, Kelvin turned around and dropped everyone alive and well at the Park Island car park.

So Kelvin accidentally found a graveyard, but we never managed manage to find that old track.

Editor’s note: This is a hugely entertaining story, but I should qualify the detail. The trampers in January 2012 find and walk the track to Barlow’s Hut, from the junction with the Parks Peak Hut track. The track is still not marked on the Topo50 maps as per the above screenshot.