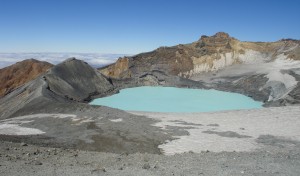 The Auckland Tramping Club facilities at the Iwikau Village are always appreciated. Tramps were undertaken each day to various stunning locations. However, the highlight has to be the trip up to the crater lake on Mt Ruapehu.

Firstly, one should never let the long range weather forecast put you off a trip, as the so-called experts do get it wrong! Sorry, fisherman Brian (who stayed at home): the rivers were not brown and there was no rain!

When in a mountain environment, you can plan your trip the night before – but it’s not until you look out the window in the morning that you know whether it is on or not. For us, the planned trip to the summit was all go. We are not too proud now to use the chairlift (and we did) but there was a delay, as they were deciding if it was too windy up higher. Eventually they got it under way and as we looked like seasoned trampers, they let us on first – was it our physical appearance or our mature looks that gave this false impression?

The chairlift ride over stunning volcanic terrain is a great way to start the day and it is hard to believe that in a few months there will be many groomed snow trails below. People who have not been in this environment say “but it is all rock”. However, you have to be there to experience the beauty of such a spectacular area: the ruggedness, the rocks, the colours and the extensive views are just awesome. You have Lake Taupo in the North, Mt Egmont in the West and to look back over to the near-perfect cone of Mt Ngauruhoe with unusual rock formations in between makes for an unforgettable sight. 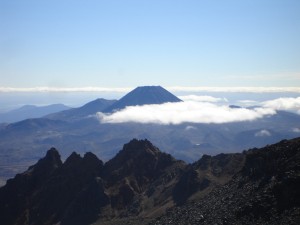 Most of the walk is ascending rocky ridges and people approaching the top from varying directions (it is not a marked route), until you eventually reach the track zig-zagging up the face and onto Dome Ridge. Dome Shelter houses seismic equipment to monitor volcanic activity and is only an emergency shelter for people. The acidic crater lake this time was not the muddy grey as in the past but a beautiful turquoise/aqua. With many photos taken, all enjoying the superb panorama and Les taking a closer look at the lake, we all headed off across the summit plateau with its many amazing features – tomos, sulphur-covered rocks, walls covered in ice and many colours – you could have wandered around soaking the atmosphere up for ages, but it was time to make our way back down the mountain. 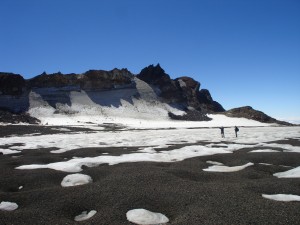 With Ted in the lead, we headed up onto the Te Heuheu Ridge and then down a well covered scoria area most of the way, but did have to take more care as we came down the edge of a glacier area and needed to make sure we did not end up on a bluff.

We all reached the chairlift for the ride down, unscathed from the rocky terrain, and on reaching the ATC Lodge it was agreed we had all experienced a great day up on Mt Ruapehu.

We arrived to a full car park. Just ahead, a large busload of tourists was setting out for the Tongariro Crossing. We managed to nip in ahead of them, departing at 9am. It was a lovely sunny day as we sauntered up the Managatepopo Valley. We diverted off the track and headed out on a route through stunted shrubs, pumice, mosses and boulders to where Pukekaikiore and the old lava flow meet at the base of Mt Ngauruhoe. 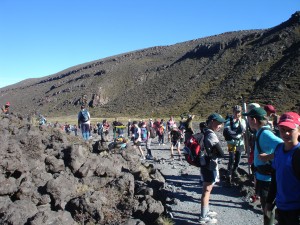 Taking a short break, we sat watching a constant trail of walkers making their way up the Managatepopo Track, including a few of our group intent on reaching the summit of Mt Ngauruhoe. Having been cut and scratched doing this route on previous tramps, our route was made easier this time round by keeping off the scoria and tucking as near to the bluffs as possible. The rock formations were varied, and impressive columned bluffs towered above us.

Reaching the high point, we discussed trying a new way across to the lakes by dropping down and picking our way across the flatter terrain below, but decided instead to persevere with our usual high level route, clambering across the large expanse of scoria rocks and rubble. Sure-footedness was a must, as there were a few loose rocks and plenty of steep ups and downs, places where we felt no boots had been before. Just to prove us wrong, Ted spots a fresh bootprint!

The pole on the skyline came into view and back on flatter terrain we found a great spot for lunch among huge boulders strewn across the valley – result of of slip from the towering bluffs behind us. Everyone relaxed in the sun, enjoying an audience of pipits darting about the rocks. Ten minutes on, we reached the stark, ash-covered terrain of Dry Lake at the head of Upper Tama Lake. It was a disappointing display of gentians this year, and we struggled to fine a decent clump to photograph. Up and over the ridge, we spotted Paul way over on Upper Tama ridge-line; frantic arm-waving and few yelps from us attracted his attention. 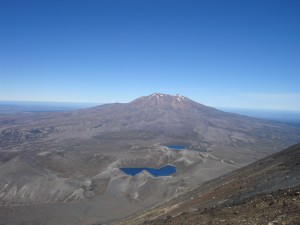 What a magic spot to be – looking over the fantastic green lakes. We followed the ridges down to Lower Tama Lake, arriving at the Waihohonu Track at 2.15 and continuing on to meet Paul who had made his way back to the track junction. He’d found many flowering bladderworts, which we had to inspect. But there was still a fair way to go, so we filled our water bottles at Wairere Stream above Taranaki Falls, slipped into ‘auto pilot’ and reached the Chateau at 4.20. There were no car ‘fuel’ problems outside the tavern this year!

Day 1: From Napier to Ruapehu with a stop for groceries and a coffee in Turangi and in the afternoon a walk up past Meads Wall and up under the chairlift to the top of the first lift. Return cross country. Weather beautiful and great views.

Day 2: Weather again beautiful with a cloudless sky but a brisk wind. Denise, Sue, Julia, Ted, Paul, Les, Nils and Ken set off to climb Ruapehu. The chairlift was late starting because of high winds but after a brief delay we took a ride up to the top of the second chair. Builders were still rebuilding the burnt out café. The climb was up the normal route over to the right. There was little snow and no problems, although we still dressed in windproof gear. Lunch just before we crested onto the exposed crater area. It was real breezy and cold on the walk up and around the rim to Dome Shelter. The Crater Lake was a beautiful blue green. Then it was steeply down the ridge to the crater floor and across to the south rim. After a brief climb around the rim, we lined up a scree slope for the descent which took us down to near the top of the T-bar lift. Then it was across and down to the chairlift for the ride down to the Top of the Bruce. We were down at about 2.30 after a great trip. I hadn’t bargained on such a strenuous day so early in the week but grabbed the chance when others were going. 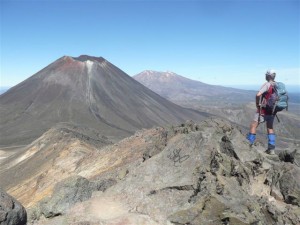 Day 3: We all set off in the vehicles to Mangatepopo Road-end. All had some idea of what they wanted to do, but we had the luxury of delaying final decisions until late. Some went back to the Chateau via The Tama Lakes, two went up Ngauruhoe, others stayed down low. Vic and I chose to climb Tongariro. I thought climbing Ngauruhoe with Les and Julia sounded a bit too tough for a rest day after yesterday’s climb. Instead, Vic and I had a great day in good weather; warm and sunny with just enough cloud to make the photos interesting.

After the normal walk into the Mangatepopo Valley end, we climbed up to the South Crater on the new track that replaces the old climb up the Staircase. It’s longer and each step is easier but it was still a nice feeling to have reached the top. Kids everywhere. By this stage, Les and Julia were well gone. It was good to stroll out across South Crater but we were soon greeted with the steep and skiddy climb out. The track to the summit of Tongariro is off to the left before the climb to Red Crater.

It was a relatively easy traverse around the crater and climb to the summit. The views were great and we got good photos of Ruapehu, Ngauruhoe and Tongariro all in a line, or nearly so. Views were 360 degrees so we could see Taupo and Tauhara and out to Egmont/Taranaki. After a leisurely lunch, we retraced our steps but diverted up to Red Crater (we still had some energy in our legs, the weather was nice and there was still space on my camera for a few more photos). We played Hare and Tortoise with some schoolkids on the way back, with the tortoises beating some of the hares, but not all. We were back at the vehicles at about 4pm.

Day 4: Zekes Hut Track. The track leaves SH1 about 15k south of Waiouru at a railway overbridge. Vic and I chose not to drop down to the hut but to enjoy the mature forest along the track. It was a good choice as there was plenty to keep our attention and the steep climb up to the vicinity of the trig was enough for us. Lots of mature totara, rimu and maiari – and lots going on at eye level and at boot level, with Vic there to point it out.

Day 5: Five of us chose to walk up the Wairere Stream, climb over the scree wall and drop into the next valley and explore it. Some went as far as the Dome Crater and seagull colony, while Vic and I went to the waterfall and round under it. Been there, done that and have the photos to prove it. Unfortunately, clouds were covering Mt Ngauruhoe. We had our lunch by the stream at the foot of the falls and retraced our steps, diverting round the Taranaki Falls track for some bush scenery on the way home.