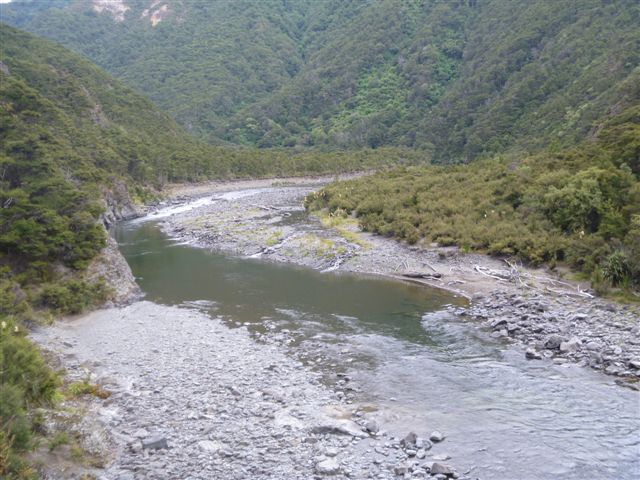 We were promised clearing weather in the afternoon for our trip up the Ngaruroro River, but that was not to be. We began from the water gauge at Kuripapago on the Napier-Taihape road. The DoC campsite was cluttered with some impressive mobile homes and caravans as we prepared for the tramp. Wry comments about the low cloud cover and drizzle were made as we crossed the two bridges on our way to the river.

Despite the huge watershed which feeds this river from the Central North Island, plus recent rain, the water level was manageable. However, the first crossing where some needed to link up caused some concern about how long the trip to Cameron’s Hut might take. Things improved with subsequent crossings, although we still had some challenges. Barry Ridley and a friend had explored the river terrace tracks a few days earlier and had found them badly overgrown. While they did some trimming, their greatest contribution was in taping the entrance and exit points. Sadly, DoC is underfunded to do the track maintainence that once would have been the norm.

There was a huge contrast in temperatures. After the high 20s during the preceding week, we found ourselves in less than 20 degrees. The water was warm, but the drizzle and light wind kept us quite cool as we made our way up.

Around 90 minutes in, we climbed a large river terrace to navigate around a bluff on the true left. As we came into an area of large kanuka, we spotted quite an elaborate camp which someone, presumably hunters, had set up with black poly in a pitched roof configuration. It was disappointing to see that they had cut down a number of the kanuka to form a fence/hide, against which they had placed cut branches as screening.

While travelling up the river, we heard a deer whistling at us. At least we thought it was a deer. Perhaps it was just a resident hermit. We also heard the call of the whio or blue duck. There was certainly a lot of fresh deer sign around.

About four hours of travel ended in the welcome sight of Cameron’s Hut, where we shed sodden parkas and sat our wet bottoms down to have lunch and the mandatory group photo. By 1pm, we were off again on the downstream leg. We continued to have our moments with river crossings (38 in total).
Somewhere, a group contagion took hold. First, one of the women felt the spirit and without waiting for the minister, decided to self-baptise. As we progressed, the hysteria grew – and two more committed themselves to the waters. One was so caught up that she went with the moment and pack-floated downstream with a blissful expression on her face. However, reality prevailed and she quickly realised that to go any further meant a very bumpy return. As she approached the rapids, she wisely regained her feet.

The return trip was completed in three and a half hours and a sodden group emerged at the campsite. It had been a wet but enjoyable day. Our English visitor says the Brits do not do river crossings and describes us to friends as “The Napier Nutters”. Perhaps she is right.

Sparrowhawk bivvy, Ruahine Forest Park, Saturday 6 August 2022 Banner Photo: The view east, towards the Wakararas and beyond On a beautiful … END_OF_DOCUMENT_TOKEN_TO_BE_REPLACED

Prologue: The author was on the Whirinaki tramp, reported on this website under the headline 'We observe a mock turtle and the rodent of Upper Te … END_OF_DOCUMENT_TOKEN_TO_BE_REPLACED

Ruahine User Group A meeting was held on Monday 25 July, in the NZDA rooms in Dannevirke.  Julia … END_OF_DOCUMENT_TOKEN_TO_BE_REPLACED

Ruahine User Group A meeting was held on Monday 25 July, in the NZDA rooms in Dannevirke.  Julia … END_OF_DOCUMENT_TOKEN_TO_BE_REPLACED

Ruahine User Group A meeting was held on Monday 25 July, in the NZDA rooms in Dannevirke.  Julia … END_OF_DOCUMENT_TOKEN_TO_BE_REPLACED

Ruahine User Group A meeting was held on Monday 25 July, in the NZDA rooms in Dannevirke.  Julia … END_OF_DOCUMENT_TOKEN_TO_BE_REPLACED