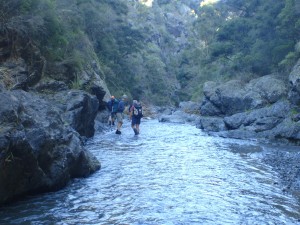 At the farm, we were met by Jock, who gave us a map, with directions on how to get to the stream. The river level was low, which made it easy going. However there were signs of a major flood a while back with the river level perhaps 2m higher judging by debris on banks. The stream has steep banks either side and, along with a strong wind, it took a while to go down it. We finally reached the branch to the Mangarakau Stream and decided to continue on to the Ngaruroro River. A couple of fishermen were plying their trade, and there was a view of McIndoe Flat on the opposite bank of the Ngarururo for Murray, and the ridge up to Ruahine Corner. 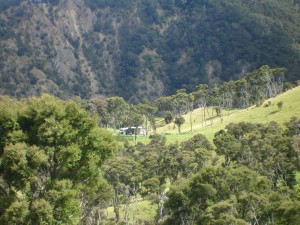 We retraced our steps back to the entrance to Omahaki Stream for lunch. We decided to return via the farm track, so walked to Mangarakau Stream. It is signposted if you look hard enough (on both sides of Omahaki Stream). Then we came to the 4WD track junction (where some of us got misplaced last time). We actually headed off up the hill (the wrong way for perhaps 50 metres) before turning around. The markers with directions were visible if you were coming downstream. After crossing the stream, it is a climb up onto farmland. We headed along farm tracks, close to the DoC boundary. We could see the private hut (apparently John Marshall got there) where, he informed us, a track leads down to the Omahaki Stream. We had not noticed it on the way down the stream. From here, we headed back to mid-farm stockyards, and further farm tracks back to the airstrip and the vehicle.

A good day to be out, with good weather; however, after perhaps four hours in the stream, I think we had had enough river walking.