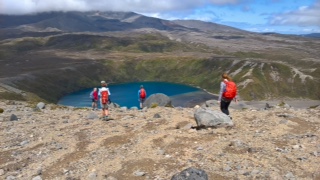 The annual visit by club members to the Tongariro National Park went very well. The weather was kind and the facilities at the Auckland Tramping Club Ski Lodge at Whakapapa were excellent as usual. Once again, many thanks for the use of this lodge.

Sadly, this was to be our last visit to the lodge because the ATC has passed ownership to a school consortium from the end of March. After increasing operating losses year on year, they had tried to sell but received no offers. They are having a final party weekend at the lodge in two weeks time. In recognition of the work done by Paul and Ted in the days when they were building the extension, both have been invited.

We received communications from ATC on the Monday prior that there would be 19 ATC members staying at the lodge for the second night, and several of them staying for three more nights also. There are 32 beds, and they all had a body. However, the ATC contingent only found out about us being there when they arrived. They were surprised, but very amicable and we got on well. We invited five of them to join us for dinner on the third evening. 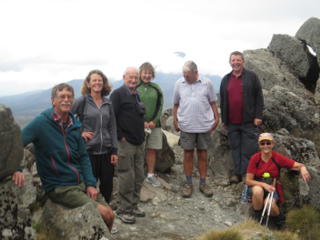 The top of the Bruce

There were 14 club members and Marie’s daughter Nina. All in all, we had 70 bed nights to cater for. The age range went from 22 to 86.

Day 1: As usual, we assembled at the layby on SH2 near Napier airport (four cars) at 8.30 and set off in convoy. Everyone met up for coffee in a café in Turangi and then to the supermarket to get the frozen foods and fresh bread, milk and so on, and on to Whakapapa. The climb up the rocky track from car park to lodge seems to get harder each year, but with all the help we soon got all the gear and food carried in. A welcome cuppa revived us.

In the afternoon, we went for a walk up to the Bruce Road, and looked at the new facilities on the learner slopes. Marie and Nina arrived early evening. Only minutes before, it was mentioned that in all the previous years there was always at least one member with the name of John. So it was decided that Nina would be renamed “John”. The name stuck.

Day 2: A walk to upper and lower Tama Lakes for most. Some had never been there before.

Day 3: The main group did the Whakapapanui Hut track from just below the lodges. The first part is on the Round the Mountain track, before a junction and right turn. After crossing the Whakapapanui River, the track follows it until a bridge takes you back across to the track to the village. Just before the village, there is another right turn which takes you to the Silica Rapids and then out to the road where a shuttle car was parked. Some in the party were content with just the Silica Rapids visit. 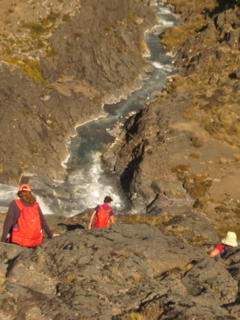 Day 4: From the top of the Mountain Road, above Ohakune, there is the other end of the section of the Round the Mountain track started on the previous day. Features are the Cascade waterfalls, Mangaturuturu Hut (owned by the Whanganui Tramping Club) and Lake Surprise. All took part, to varying degrees. The main group reached the lake.

Day 5: On this day, it was new ground for most of us, and not without drama along the way. Of the three vehicles, two were running out of fuel and one had an engine warning light shining brighter by the distance. We drove to the Desert Road and turned off at the Tukino ski-field access road. Across the Rangipo Desert, it was 6 km of 2WD followed by 3 km of 4WD.

Ted dropped off the six keen members (yes, seven in a Subaru wagon) at the junction with the Round the Mountain track. From there, they headed north to eventually meet up with the rest of us at Waihohonu Hut about 2.5 hours later. 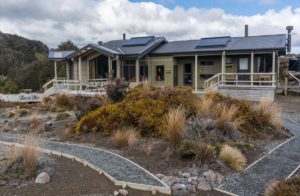 The Palace, aka Waihohonu Hut

The rest of the group drove north to park at the roadside and walk into the hut on another track. This took about 1.5 hours. At the hut, it was evident why it is called the Palace; it is large, modern and very well equipped. About 20 minutes south of the hut is the spring that feeds the river, and it was well worth the extra distance to see this miracle of nature. Also worth a look was the restored original hut which was serviced by horse and carriage prior to the Desert Road being built. We returned as a group to the cars, and a long trip back to the lodge. 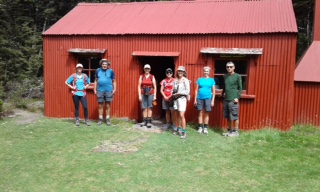 Meanwhile, back at the lodge, Geoff’s plan to go mountain biking in Ohakune with Ray as a car shuttle driver were thwarted when the car couldn’t start due to starter motor failure. The car was towed to Owhango by the AA and because it was beyond the use-by date, it was written off by Geoff and sold to a dealer in Taumarunui. Geoff and Denise went home two days early with Bruce, who was leaving that day anyway.

Day 6: There was thunder and lightning overnight and heavy rain when we got up. The weather up to this stage had been excellent – warm, windless and sunny. It was decided to go to Owhango on the Taumarunui Road and do the Ohinitonga Bush walk. But the rain persisted and we changed plans to have a coffee in Taumarunui. It cleared, the sun came out, and we managed to do the bush walk in sunshine after all. Some of the group had not seen, nor heard of, the Raurimu Spiral. We were in the wrong place on two occasions when freight trains went through and had to describe the Spiral rather than show it with a train going around.

Day 7: The usual routine: pack up, clean up, carry the gear back down the rocky path, drop the rubbish and recycling at the council site in the village and head off home. We stopped for a coffee just north of Turangi, at the Liquorice Cafe. All was going well until we neared Napier when first of all we got text messages and then phone calls to say the road was closed at Eskdale. With no clear alternatives, we turned around and went back to Taupo, then to Taihape and the Gentle Annie road to Napier. Four hundred km and six hours later, we reached home. 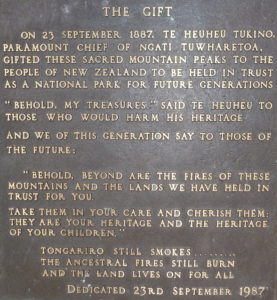 The Tongariro NP, gifted to all New Zealanders

Overall it was very successful, we seemed to meet each individual’s expectations, achieved a few “firsts”, didn’t lose anyone, didn’t break any bones, and learnt a few botanical names.

Where to from here? The plan is to approach other lodges in the same area, especially those that are more accessible from the road. We will be looking for a commitment to a regular booking and preferably with sole use during the time we are there.

Many thanks once again to ATC for the use of the facilities, to Yvonne Shaw for all the pre-prepared food, and to the two organisers Paul and yours truly. It’s not easy, but good fun.