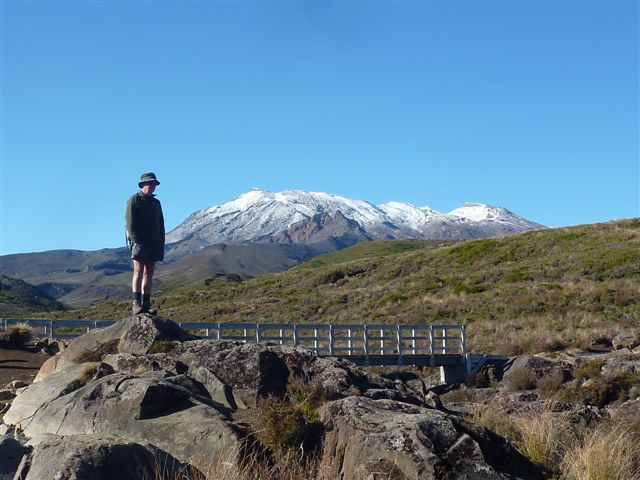 Day 1.We arrived on the mountain early in the afternoon after a brief stop at Turangi for perishables and coffee. On the mountain, we were greeted with rather unpleasant weather so it was only the very keen who ventured out for a look around that afternoon.

Day 2. The weather was atrocious so, like the previous day, it was reading, table tennis and The Big Jigsaw. 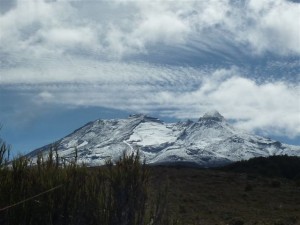 Day 3. Snow had fallen overnight but not down to the lodge. All were champing at the bit, so we decided to head down the mountain to some better weather. Ice crystals were on the track and car windshields needed defrosting. We enjoyed reasonable conditions on the Whakapapanui, Silica Rapids, Tawhai Falls and Taranaki Falls tracks. We were hailed on, though, as we returned to the lodge. High winds were again forecast for the next day. 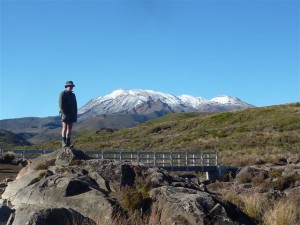 Day 4. The day dawned beautiful so, despite the forecast, we set off early for the Mangatepopo Valley with some hoping to climb Mount Ngauruhoe. We were only a short distance along the valley track and already battling into a cold fierce wind when those plans were abruptly abandoned and it was back into the car and heading for Wairere Stream. Good choice. We had a great day, with some going as far as the waterfall and Cone Crater despite the cold wind in places.

Day 5. We believed the weather forecast today and decided on the shelter of the Round the Mountain Track on the Ohakuni side; Mangaehuehu Hut and return. Again a good choice, as it was sheltered and we had great views. The southern flank of the mountain was well covered in snow and the cloud had lifted. The two ladies left to return to Napier that night.

Day 6. The weather was the best yet. Kelvin and Peter headed for Ngauruhoe and claim they “knocked the B… off”. The photo they took of clouds at the top would not have convinced a judge but met our somewhat lower standard of proof. Vic and Ken opted for the more sedate Whakapapaiti Circuit and John explored the Mangatepopo area. Judging by the inactivity after dinner that night, four consecutive days tramping was quite enough. However, The Big Jigsaw was completed, thanks to the dogged perseverance of Peter and constant help from others.

Day 7. Up early – even earlier than normal. We had a good breakfast and then got into clean-up mode. As normal, the weather was beautiful as we headed home.

How lucky we are to be able to spend time on the mountain – so thank you to our hosts, the Auckland Tramping Club. We really enjoy the luxury and the chance to tramp on the wide variety of tracks, so even when the weather isn’t perfect we can still have a good day out. Thanks for the company, everybody, to our leader and to John for his experienced helping hand.

Sparrowhawk bivvy, Ruahine Forest Park, Saturday 6 August 2022 Banner Photo: The view east, towards the Wakararas and beyond On a beautiful … END_OF_DOCUMENT_TOKEN_TO_BE_REPLACED

Prologue: The author was on the Whirinaki tramp, reported on this website under the headline 'We observe a mock turtle and the rodent of Upper Te … END_OF_DOCUMENT_TOKEN_TO_BE_REPLACED

Ruahine User Group A meeting was held on Monday 25 July, in the NZDA rooms in Dannevirke.  Julia … END_OF_DOCUMENT_TOKEN_TO_BE_REPLACED

Ruahine User Group A meeting was held on Monday 25 July, in the NZDA rooms in Dannevirke.  Julia … END_OF_DOCUMENT_TOKEN_TO_BE_REPLACED

Ruahine User Group A meeting was held on Monday 25 July, in the NZDA rooms in Dannevirke.  Julia … END_OF_DOCUMENT_TOKEN_TO_BE_REPLACED

Ruahine User Group A meeting was held on Monday 25 July, in the NZDA rooms in Dannevirke.  Julia … END_OF_DOCUMENT_TOKEN_TO_BE_REPLACED