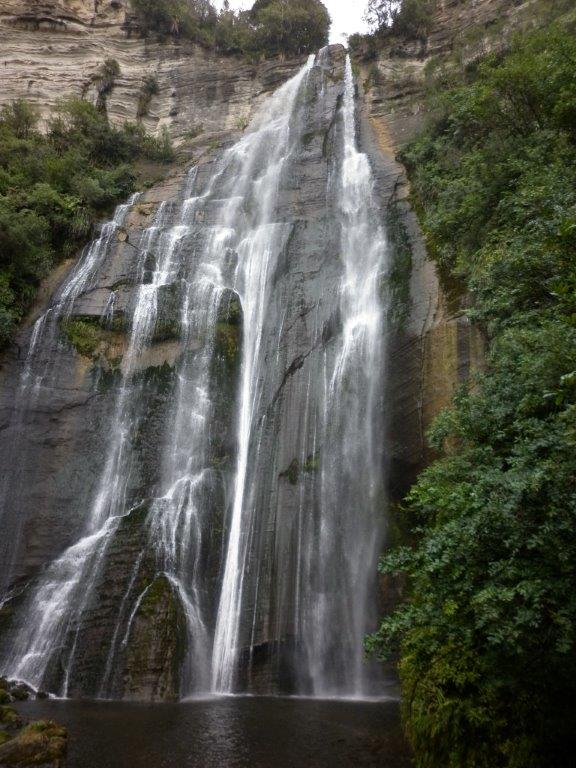 We set off from Church Road Winery with 10 on board. At Bay View, we picked up Wai who had got her times wrong and was nearly left at the starting gate. The weather was cool but fine and the forecast was good. We were still experiencing the cool southerly from the tail of Cyclone Pam.

We travelled up to the top of Pohokura Road to the start of the Boundary Stream track. Some DoC volunteers arrived at the same time. They had come to feed the kaka at the aviary. We heard many of them in the trees above us but none chose to land and feed whilst we were there. 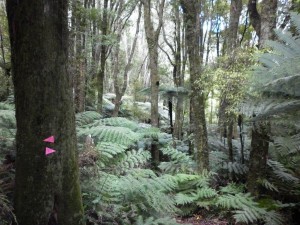 The intended trip was to do the circuit through the Hayes Deer Farm area as well as the Boundary Stream, but we were told that the approval that we had to cross the farmland only covered part of where we intended to go. After much discussion, it was decided to travel to the Shine Falls end of the track and to only walk up the Boundary Stream track as far as time and energy allowed, and then return the same way to the car park.

The Shine Falls were in full flow following the recent rain and looked magnificent. Some of the growth of bush at the bottom of the falls restricted the view but did not spoil it. We climbed to just beyond halfway up the track, sat in the sun to eat lunch and then headed back down. A short detour was made to get to the top of the falls to see the view from there, but it was too overgrown to get near. 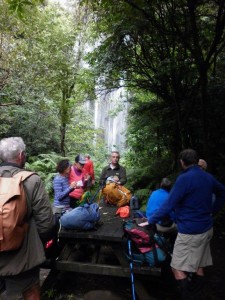 Lunch with the falls in the background

On our return to the car park, we found the van covered in a few hundred bees, but a quick whizz up the road and back soon got rid of them.

The return trip was uneventful, arriving at about 5 pm after an interesting and fulfilling day for all.