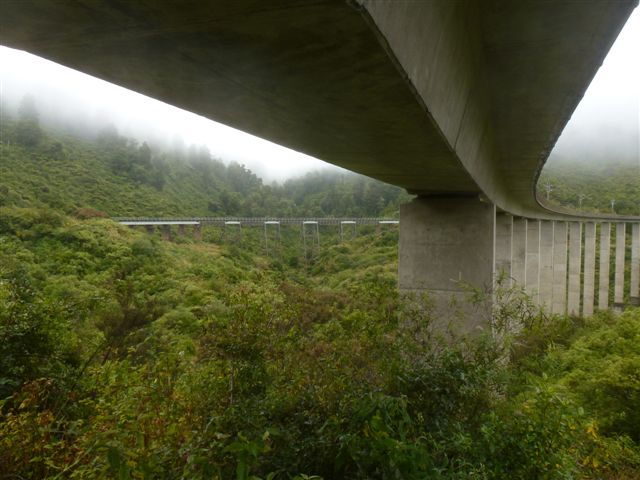 The weather forecaster got it right. It was raining. So we went down the mountain seeking some shelter at least.

We headed for the Ohakune Old Coach Road (OCR) – and no, Ohakune does not have an Official Cash Rate. It runs from Ohakune to Horopito along the route of the old coach road. No surprises there. 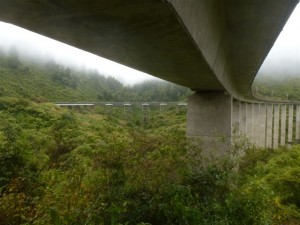 We didn’t do the through trip but settled for an in and out walk as far as the Hapuawhenua rail viaducts, starting from the Ohakune end. There are two. One is a magnificent tall, curved, riveted lattice iron structure no longer in service and the new one is also a magnificent tall, curved structure but of concrete. The old one has been made safe (OSH-proofed) as an historical monument and given Cat 1 status by the Historic Places Trust. It alone is well worth the walk in. The DoC website is also well worth a visit to get some views you can’t see by walking. Note the lack of vegetation at the time it was built.

Of the walk itself: Great. I particularly liked the gradients, being limited by the available horsepower when the original road was built. There were some views out over the adjacent farmland but on the whole we were walking through lush native bush, mature shrubs and tall trees. You could almost imagine horse-drawn coaches coming towards you along the broad track with overhanging trees. The original rough flagstones are still present, particularly on the steeper bends.

We investigated a disused rail tunnel which – like the viaducts – was curved, thus adding to the experience. Why the curves? It was rugged country in which to build a rail line. The information boards provided along the track were interesting but the one at the viaduct was particularly so. It showed the primitive conditions for the workmen and the hardships they endured while building the original viaduct back in 1907/8.

Unlike the bridge builders, we were able to retreat to the comfort of dry clothes and then hot coffee at an Ohakune café. Yes, we had had a good day; not badly impacted by the weather and definitely more laid back than our first two days on the mountain.