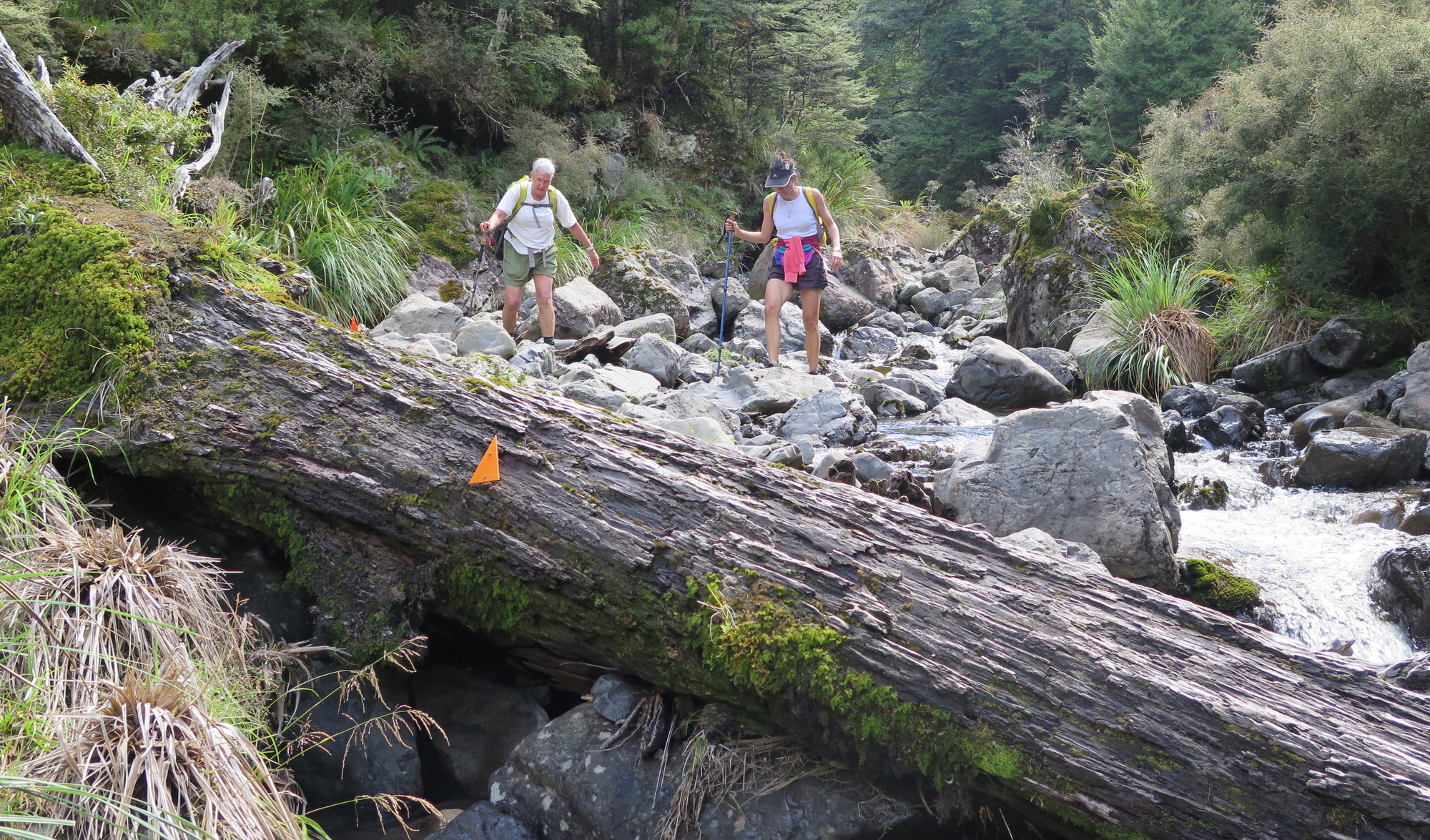 We headed off from the Sunrise car park around 9am, on a beautiful warm day, all eager for the tramp ahead. From the one-kilometre stroll along a fence-line to the start of the track, you start ascending and the views back towards Hawke’s Bay are stunning. The surroundings are very lush with lots of new growth on the manukas – and no wilding pines for a change.

It didn’t take long to realise how undulating the track actually is, uphill and down dale. The route down to Middle Stream was slightly hair-raising, but all met the challenge. 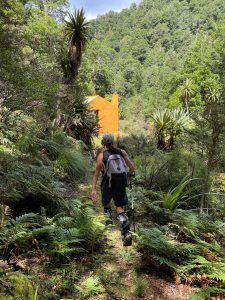 Then the next part of our adventure: the ascent to the tops, followed by a well-deserved morning tea break to admire views to the west.

Then we sidled along the edge and a made a big drop down to Smith Stream. The creek was quite low but we had to watch our feet because the rocks were slippery.  Marie slipped and hurt her wrist, but no real damage seemed to have been done and we continued along the creek and up to the tops again to find the hut.

Good navigation skills put us at the hut around 1pm for a sunny lunch by the creek. The hut, which is at 864m above sea level, was very neat and tidy with lots of firewood stacked up at the door, and no-one had ventured this way for more than a month.

None of us wanted to go to the tops again so we found the start of Smith Stream – making our way down was an adventure and a half, a road less-travelled. It was nice to reach the familiar slip and see the orange markers again.

Di slipped on a rock and I heard the crunch as she landed; but her bones must be amazing because up she popped and just carried on!

The ascent from the creek was a long haul, but once we reached the tops the going was good. Ros, on her first trip out with the club, sure picked an adventurous maiden day out.

We arrived back at the cars just on 6pm. It had been a great day. There were a few weary bones but it was worth the grunt.

Sparrowhawk bivvy, Ruahine Forest Park, Saturday 6 August 2022 Banner Photo: The view east, towards the Wakararas and beyond On a beautiful … END_OF_DOCUMENT_TOKEN_TO_BE_REPLACED

Prologue: The author was on the Whirinaki tramp, reported on this website under the headline 'We observe a mock turtle and the rodent of Upper Te … END_OF_DOCUMENT_TOKEN_TO_BE_REPLACED

Ruahine User Group A meeting was held on Monday 25 July, in the NZDA rooms in Dannevirke.  Julia … END_OF_DOCUMENT_TOKEN_TO_BE_REPLACED

Ruahine User Group A meeting was held on Monday 25 July, in the NZDA rooms in Dannevirke.  Julia … END_OF_DOCUMENT_TOKEN_TO_BE_REPLACED

Ruahine User Group A meeting was held on Monday 25 July, in the NZDA rooms in Dannevirke.  Julia … END_OF_DOCUMENT_TOKEN_TO_BE_REPLACED

Ruahine User Group A meeting was held on Monday 25 July, in the NZDA rooms in Dannevirke.  Julia … END_OF_DOCUMENT_TOKEN_TO_BE_REPLACED