The day was perfect for a tramp in the Ruahines, and a van with 11 aboard set off along Highway 50. Our goal: Hinerua Hut.

Driving along Mill Road, admiring the Ruahine Range (as you do when contemplating as to which section you are going to climb), we could see an obvious scarfed track heading up, up and up a whole lot more. For Cherie and I, it was a first, so naturally we were a little apprehensive, not yet knowing whether this was our intended route to the hut.

The view towards Ohuinga and Black Ridge

After a short drive across private farmland (permission needs to be obtained before starting here), we arrived at our starting point a little before 9am. With packs donned and sun shining, we headed off across grassy paddocks toward our first stream crossing. This was reminiscent of a scene from ‘The Sound of Music’. It was not to last.

After a little more cross-country, we reached the Tukituki River where we had to do some criss-crossing. The river was not running high, although in some sections we needed to be careful with our negotiating as the water was quite swift. Once we had finished our river walk, it was time to start the climb.

From the river, the scramble up

First there was the scramble up a very steep incline, grabbing hold of roots, branches or whatever we could find to pull ourselves up, scrub ripping our hair, clothes and anything else it could hook its Triffid-like tentacles into. Climbing out of the scrub and catching our breath, it was time to start The Ascent – and what a climb it would prove to be. It was at this point that Ted and Sue Marshall decided to do their own thing.

Ahead of us: a graded track appearing to be almost vertical for more than 800 metres. Yes, this was what we had seen from the van on our drive in. The climb was relentless. The only break was a couple of bends in the track. It was a test of our fitness (or lack of). After finishing the gruelling climb, it was time for a rehydration break.

Now we could start the tramp up Hinerua Ridge. The track was fairly easy, a few steep climbs but mainly undulating and the bush was glorious. We arrived at our destination at 12 o’clock. The three speedy trampers, Julia, Les and Rosemary arrived at the hut 10 minutes before the rest of us. 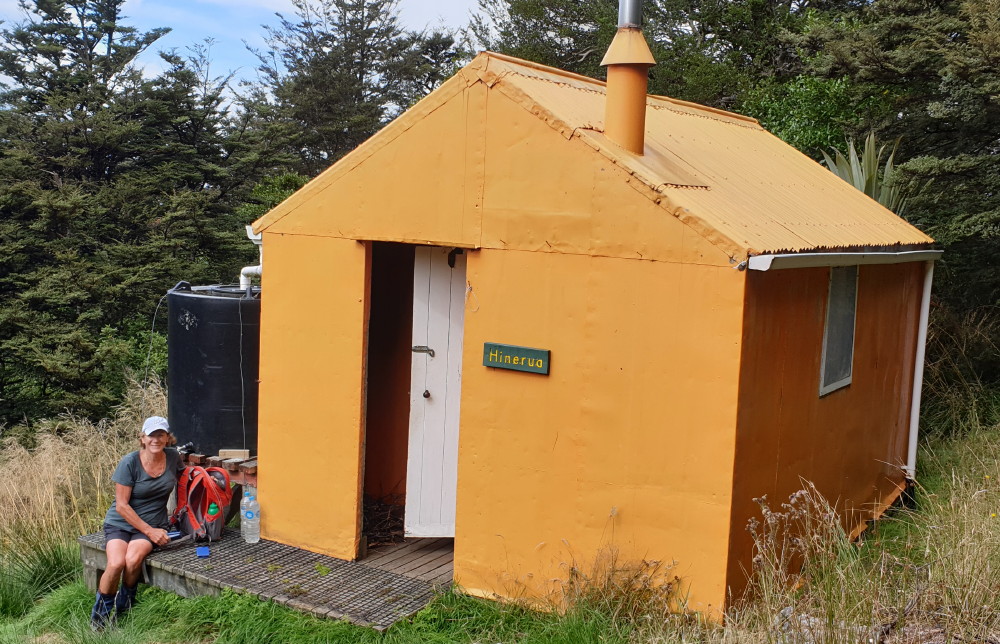 Hinerua Hut is a small, cosy four-bunker, perched on top of a small rise. It has recently been refurbished by DoC, with new bed slats and a new fire flue.

After a leisurely 30-minute lunch, it was time to head down – which was certainly easier than climbing up, until the dreaded 800m descent. Juliet, Sue Martin, Alison and I went down the way we came up, whereas Julia, Les, Cherie, Keith and Rosemary decided to divert and use the old track, avoiding the 800m graded track. The two groups met up again at the bottom of the steep, scrubby Triffid area before making our way back to the start point. We arrived at the van just after 3pm.

Sue Marshall managed to score a few scrapes and bruises and Cherie had a tussle with some barbed wire, but all in all it was a great day out for everyone.

Aranga Hut On Saturday 14 January the tramp was changed to a loop in the Northern Ruahine Range. … END_OF_DOCUMENT_TOKEN_TO_BE_REPLACED

Aranga Hut On Saturday 14 January the tramp was changed to a loop in the Northern Ruahine Range. … END_OF_DOCUMENT_TOKEN_TO_BE_REPLACED