We left Napier at 7 am on Saturday morning. The weekend forecast was terrific so we decided to go over the Hikurangi Range in the Eastern Ruahines. After starting from the car park at the end of Mangakukeke Road at 10 am, we crossed the farmland with permission of the manager. It is a 30-minute walk, then a further 10 minutes to the bushline and the start of the track – exactly as described in North Island Weekend Tramps by Shaun Barnett (revised 2008 version). The ragwort on the last paddock has seeded on the side of the track and so we snapped the heads over wherever possible without breaking stride. A gentle climb up with views of the Pourangaki River below, and in good time, we made Kelly Knight Hut. 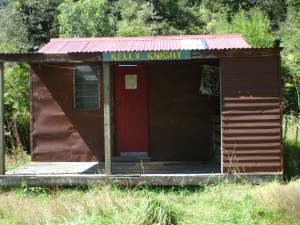 We crossed the river on a swingbridge, and then it was another five minutes to the hut. What a good bush spot in the warm sunshine. An option for a winter solstice tramp perhaps?

Then back up to our packs and lunch, looking down at the hut. We soon picked up the track from which we had diverted to the hut, and started the gradual climb to the tops. The bush track was easy walking, but when we emerged and made our way through a wide track cleared through leatherwood, and saw the tops, my heart sank. Bugger, long tussock… my pet hate. The day was hot as predicted and water was getting low as the sweat was pouring off us all. We’d been told there were tarns at the top. Half-way up the tussock, our dreams came true. We happened upon a large water bottle, which must have come off someone’s pack, along with a foot slide on the wet ground. Our motives were that we should keep the track tidy and so we took the water on board. Whew…

We took our time going up this section; reaching Wooden Peg, we could at last have a good break and take in the views. We decided not to go over to Iron Peg and Mangaweka Trig that afternoon, but come up the next day. The walk down to Purity Hut is well marked and a relief after the hard grind up from Kelly Knight.

We reached the hut, soon had our beds sorted, and washed off all the sweat. The foot bath in a plastic bowl felt wonderful. We sat on the veradah in the warm late afternoon sun and had hot drinks and Easter egg treats. Thanks, Alison. We could see Kapiti and the top islands of the Marlborough Sounds.

Two other hunter/photographers returned to the hut late in the evening. They had not shot any deer, but had seen some on other ridges back up the track to the top. 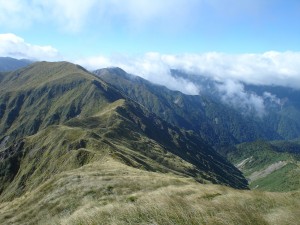 Sunday dawned and it was a little cloudy but we resolved to get back up to the tops and bag the highest peak in the Ruahines (although second time around for me). We used my little lightweight pack for drink bottles, cameras, etc and made quick time to the tops. Swirling clouds spoiled our view, but we made it across to Iron Peg and then on to the Mangaweka Trig. We checked the elevation on the GPS and it read 1724m. Photo evidence was required and we decided to go straight back to Iron Peg. On the way, the cloud cleared and we spent time checking out the route to Waterfall Hut, and identifying the Eastern Ruahine ridges opposite. The Wakararas were visible through the Waipawa Saddle, as was Rangi Saddle, Sawtooth Ridge, Te Atuaoparapara etc. What a splendid vista, and good to see it from the western side. We mucked about and drank in the views.

Satisfied, we headed back down to Purity Hut again, and had lunch with a hot cuppa before heading down and out. 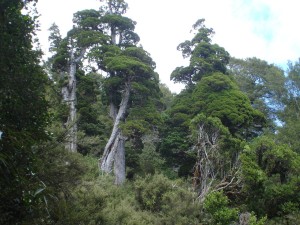 The mountain cedar trees, with their spectacular shapes and green, were different from the usual eastern Ruahine Range trees. They stood out on the slopes.

We reached the park boundary in an hour and then made our way down and over the farmland back to the car. From the farm track, the roof of Purity Hut was glinting in the sun. We were all glad we had made the loop walk, and the walk back to the tops that morning. The views had proved to be well worth it. Three happy and aching trampers returned to Napier.