We arrived at the Lakes car park, Kuripapango, on a clear and calm morning, where the previous night’s rain had made conditions cooler. Morning mist rolled in the valleys, and occasionally over some of the mountain saddles, making it very picturesque. 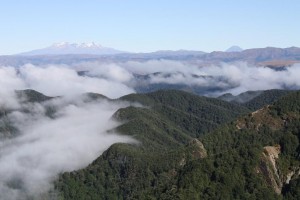 From the pine trees car park, the group quickly ascended Kuripapango. At the lower level, an assortment of pittosporums, kanuka, tree ferns and many forms of bracken and scrub grew. This gradually changed to mountain beech and pine remnants, as we neared the top of Kuripapango. The circuit was to trek along a series of ridges, where harsh climate conditions and continuous subduction processes, resulting in erosion and uplifting, have created many stunning rocky outcrops along the ridge-tops.

After a short walk along the Smith-Russell track to Kiwi Saddle Hut, the group suddenly exited the beech trees and were treated to panoramic views of Ruapehu and Ngauruhoe. These views were to last all day as we circled around the ridge tops. Also spectacular was nature’s fluid characteristics of the mist; static in the valleys and dynamic over the mountain ridges.

At 11.00, the group had a morning break at Kiwi Saddle Hut, set among mountain beech, creating cooler temperatures in the tree shade.

After leaving Kiwi Saddle Hut, we ascended northwards along a ridge towards Kaiarahi. Along the way, only pockets of mountain beech remained, with most of the ridge covered in a variety of mountain lichen, bracken and wild grasses. We stopped for lunch next to hill 1356, and admired the views.

After lunch, we continued north to Castle-Camp. Upon entering the camp, nestled in Beech trees, we were surprised to see the lone shelter surrounded by a dozen tents. We had walked through a Department of Conservation Campsite, set up for the month’s contract of clearing 400 hectares of Pinus Contorta in the region.

Continuing past Castle-Camp, we ascended to Kaiarahi – our highest point of the circuit. Kaiarahi stretches north, finishing at Kiwi stream, where converging on the other side, with Mad Dog Hill and Studholme part of the Kaweka Ranges. 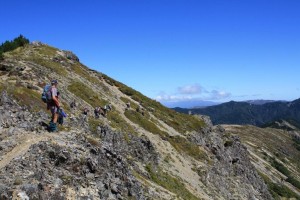 A short descent from Kaiarahi, we traversed one of the Tits. These two pointed peaks adjoin Cooks Horn, a spectacular column of rock set among a rugged and steep ridge. Continuing past these points, we descended along a narrow rocky ridge-line to Rogue Ridge. We were nearing the Kuripapango-Kaiarahi circuit. A long steep descent along Rogue Ridge had us join with the Kaweka Hut Track before descending to the Tutaekuri River. From the river, another small final ascent to the car park found many trampers weary but happy to have completed one of the most stunning walks in Hawke’s Bay.