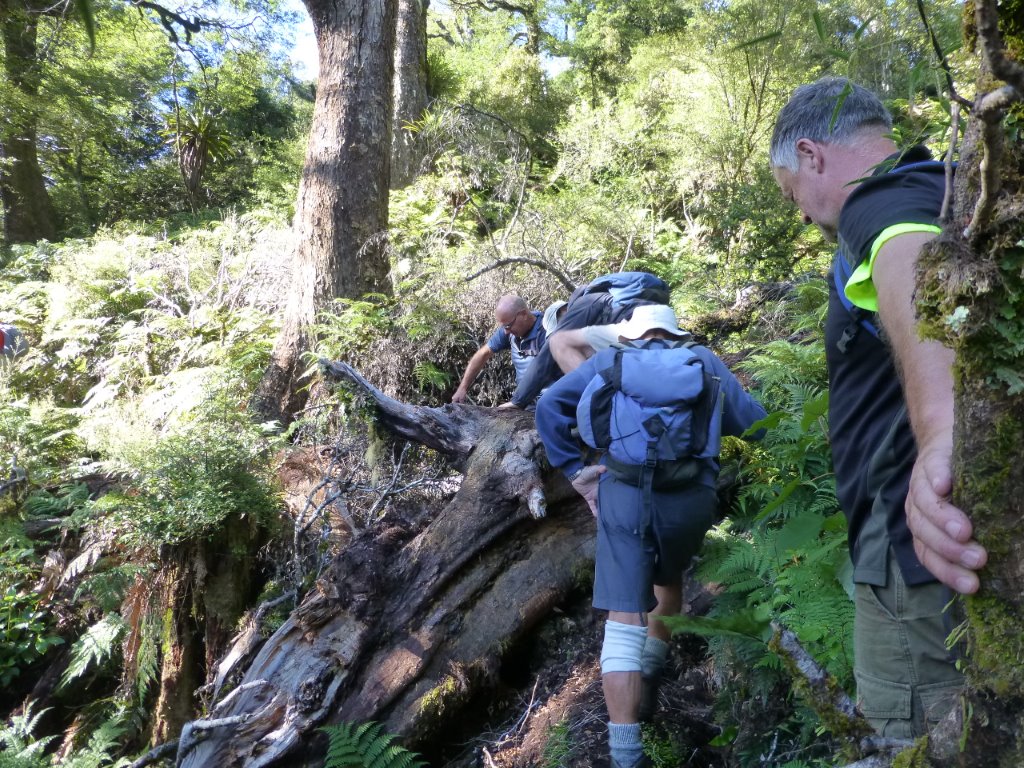 It was an early start for the Wednesday group, as we were heading north over the Taupo Road and into the Whirinaki Forest Park. As it turned out, this was to become a day of obstacles. 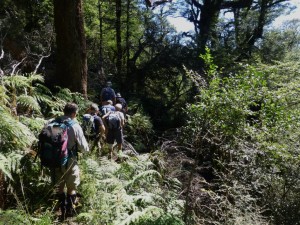 As we turned off the main road and approached the bridge over the Waipunga River, we noticed new side railings have been added – making it a lot narrower. Not sure if the bridge has been strengthened underneath. Didn’t appear so! The first few kilometres along Waipunga Rd could do with another grading as the potholes are getting rather large.

Once onto the forestry roads, driving is much better. Logging has been going on in the area of Circuit and Pine Milling Roads, changing the route and making the landscape a lot different. At the turn-off into Pukahunui Rd, a large logging truck blocked our way but a nice chap directed us around the truck then radioed ahead to tell those on the ridge above not to drop trees on us as we passed underneath! We finally made it to the Pukahunui car park and as a cool breeze had sprung up we didn’t linger but set off up the Upper Te Hoe track. 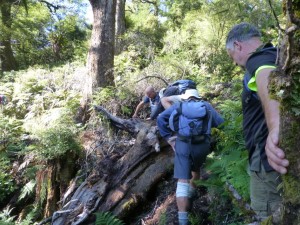 It soon became apparent that the track has not been cut and cleared for several years. It was up to the guys in front (Ted and Colin) to push through, making it a little easier for those of us in the back. After about 30 minutes and just into the tree line, we came across the wasp nest that had been reported to DoC Murupara. It is well marked with red string across the track. We moved slowly one at a time past, but as it was cool there wasn’t much action from the nest – although Tony managed to get stung!

Progress at times was slow due to having to scramble over or around huge fallen trees and bush-bash through bracken and ferns. It’s hard work watching where you put your feet all the time; you don’t get to look up and take in the beauty of the forest.

We finally arrived at the clearing on the high point around 11am, and after standing around in the sun for a few minutes dived back into the bush, continuing on until we reached the turn-off to Upper Whirinaki Hut. As it was not quite 12, we moved on to another high point which gives some views into the Upper Te Hoe area. It was decided to return to the sunny clearing for a long lunch, after which we retraced our steps to the car park. Some managed to get past the wasp nest unscathed, but five others got several stings.

We do hope DoC Murupara will not neglect this track and keep it open. It’s great access to the Te Hoe area and a magnificent part of the forest park.

Sparrowhawk bivvy, Ruahine Forest Park, Saturday 6 August 2022 Banner Photo: The view east, towards the Wakararas and beyond On a beautiful … END_OF_DOCUMENT_TOKEN_TO_BE_REPLACED

Prologue: The author was on the Whirinaki tramp, reported on this website under the headline 'We observe a mock turtle and the rodent of Upper Te … END_OF_DOCUMENT_TOKEN_TO_BE_REPLACED

Ruahine User Group A meeting was held on Monday 25 July, in the NZDA rooms in Dannevirke.  Julia … END_OF_DOCUMENT_TOKEN_TO_BE_REPLACED

Ruahine User Group A meeting was held on Monday 25 July, in the NZDA rooms in Dannevirke.  Julia … END_OF_DOCUMENT_TOKEN_TO_BE_REPLACED

Ruahine User Group A meeting was held on Monday 25 July, in the NZDA rooms in Dannevirke.  Julia … END_OF_DOCUMENT_TOKEN_TO_BE_REPLACED

Ruahine User Group A meeting was held on Monday 25 July, in the NZDA rooms in Dannevirke.  Julia … END_OF_DOCUMENT_TOKEN_TO_BE_REPLACED