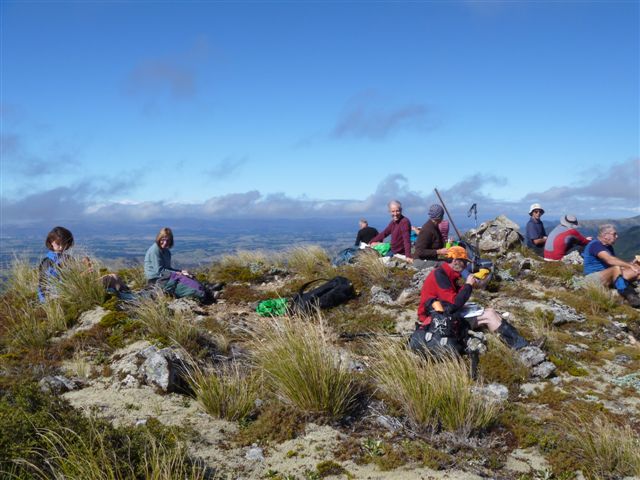 From the first locked gate, the van followed a winding road to the Super Bin where we met three hunters with a 10-pointer.

(Apparently the farmer has sold the right to hunt on his land via Trademe.)

From here we went up a 4WD track, over a high gate, past the house and continued up the 4WD track into the bush, turning left at the deer fence and finally found a gate which marked the start of the track proper. 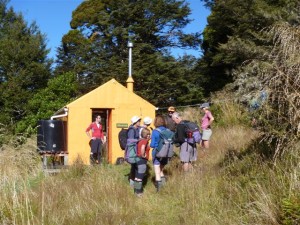 We had a pleasant walk up through the bush, past the track junction at Foot’s Mistake and across the saddle to Hinerua Hut. There was little wind, so we decided to continue on up the track above the bushline.

Once above it, we had good views all round. We could see the orange Tarn Bivouac on Black Ridge way off in the distance. Behind it and even further away, you could see the toilet of Howletts Hut. 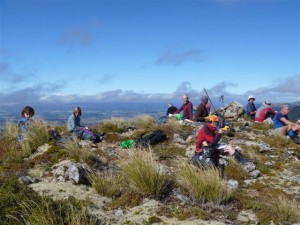 Further up the ridge, where we decided to have lunch, someone heard calls from a native falcon. Shortly after, it was seen flying below us.

On the way back down the track, we could see grey clouds in the distance which suggested showers as per the weather forecast.

Down the track and while descending the 4WD track, a barking sound was heard and a vivid green gecko was spotted trying to hide under an old dead branch lying in the middle of the track. Several of us inspected the gecko (some closer than others) before continuing on and leaving it in peace.

Going down the 4WD track was more difficult than expected, due to the loose metal on top of it.

Fortunately, a visitor to the house opened the high gate just as we were approaching it – which saved having to climb over it again.

On the way back to town, we had our first shower of rain, followed by a refreshment break at the Tiko.

Sparrowhawk bivvy, Ruahine Forest Park, Saturday 6 August 2022 Banner Photo: The view east, towards the Wakararas and beyond On a beautiful … END_OF_DOCUMENT_TOKEN_TO_BE_REPLACED

Prologue: The author was on the Whirinaki tramp, reported on this website under the headline 'We observe a mock turtle and the rodent of Upper Te … END_OF_DOCUMENT_TOKEN_TO_BE_REPLACED

Ruahine User Group A meeting was held on Monday 25 July, in the NZDA rooms in Dannevirke.  Julia … END_OF_DOCUMENT_TOKEN_TO_BE_REPLACED

Ruahine User Group A meeting was held on Monday 25 July, in the NZDA rooms in Dannevirke.  Julia … END_OF_DOCUMENT_TOKEN_TO_BE_REPLACED

Ruahine User Group A meeting was held on Monday 25 July, in the NZDA rooms in Dannevirke.  Julia … END_OF_DOCUMENT_TOKEN_TO_BE_REPLACED

Ruahine User Group A meeting was held on Monday 25 July, in the NZDA rooms in Dannevirke.  Julia … END_OF_DOCUMENT_TOKEN_TO_BE_REPLACED