Two of the group headed off to Mackintosh Hut via the direct route. The rest headed off through the dark forest of douglas fir trees to the Tutaekuri River. Then up The Rogue with some of us pulling small pinus contorta on the way up. Part way up The Rogue, the front part of the group disturbed a wasps’ nest next to the track. Two trampers at the rear got the insects’ revenge.

On top of the ridge, there was still a fair bit of snow, still powdery. Walking along towards The Tits and Kaiarahi, we felt the cold wind coming from the West. A good time to put on windproof parkas.

Onto Kaiarahi, with parts of the track offering some protection from the wind, and down to the start of Mackintosh Spur. There is a lot of large pinus contorta, some of which protrudes right over the track. As we went down, the snow melted and dripped from the trees. We found a good lunch spot in the sun and out of the wind. 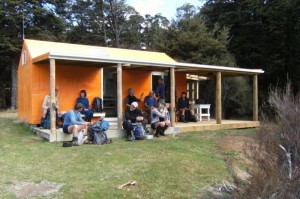 Mackintosh Hut has been increased in size. It now has eight benched bunks with a large verandah. It is a big improvement on the original. The verandah has hooks for coats and wires under the roof to hang washing and the windows have little air vents at the top to allow for circulation. There were three hunters in residence.

After lunch, we headed across the plateau and down to the Tutaekuri River. Now that the three-wire bridge has gone, there is no fun in the new solid bridge that’s replaced it. A steep climb out to the forestry road and back to the Lakes Road car park. We noted about 12 cars parked – presumably owned by hunters – before heading home.