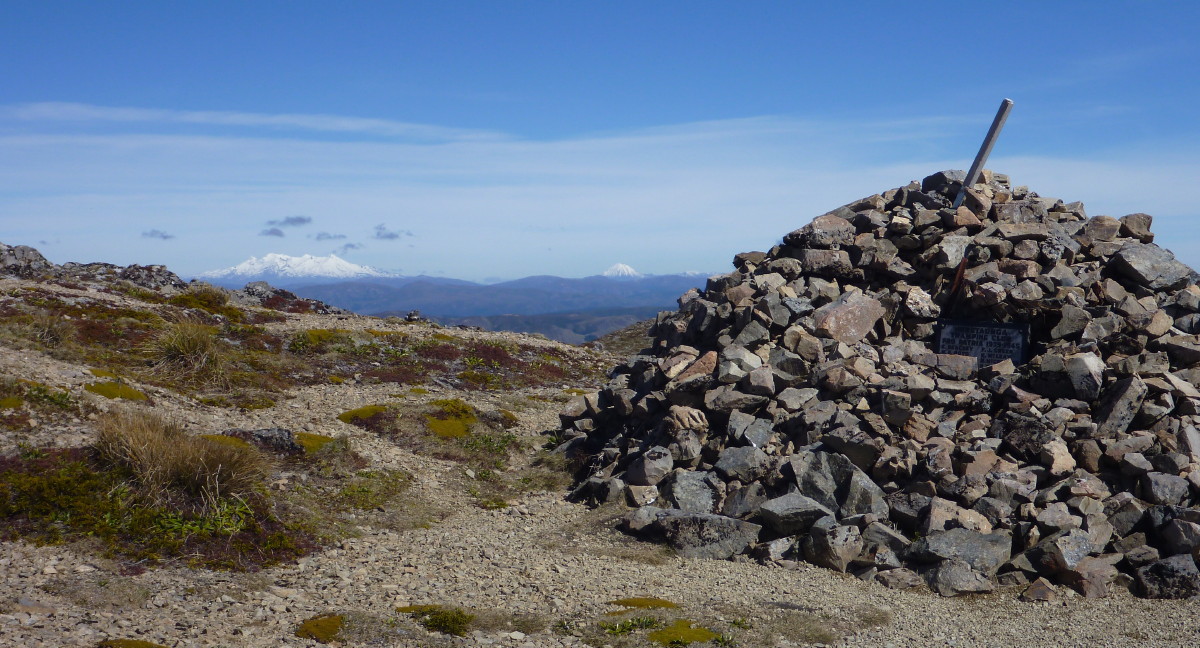 The club’s 10th Anniversary Tramp
Banner Pix: The HTC memorial cairn, and Mts Ruapehu and Ngauruhoe are the view on a beautiful day

Among the 35 who turned out for the Anniversary tramp this year were Doug and Mehyrl Fraser, Bevan Campbell and Matthew Porteous, Patricia Donovan (a previous treasurer), Geoff Robinson from the Heretaunga Club and of course Bob Coe from Tauranga, accompanying Harold and Myrl Beer.

Despite the numbers, we were away to an early start and made good time to Whittle Road where Brian Viggers fell by the wayside when his car broke a wishbone. The Black Birch is no place to be without steering, so he was left by the side of the road as we transferred passengers and pushed on. 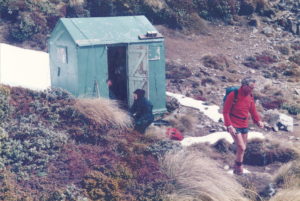 The weather this year proved to be perfect and after arriving at the car park, groups of people could soon be seen making their way up the zig-zag and then up the shingle to the Dominie Bivvy; somewhere in front were Harold, Myrl, Bob and Pat who had made an early start. 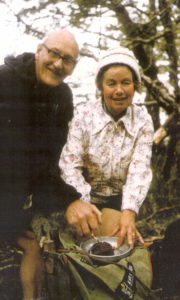 In the fine weather, everyone made excellent time to the top and were up in time for lunch. Myrl, just a week past her 75th birthday, was given a cheer when she arrived; well done, Myrl and Harold. 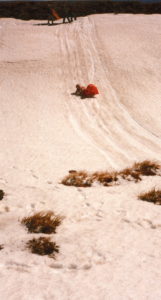 There was enough snow left for some plastic bagging by the younger (and not so young) members of the party whilst the oldies found a reasonably sheltered spot, had lunch and enjoyed the tremendous views all round; Ruapehu and the National Park mountains were magnificent. Four of our fitter members had carried on to Back Ridge Hut; more of them later.

After lunch, we reorganised ourselves with a small party heading off for North Kaweka, Harold and his group plus one or two others returning back down Makahu Spur, the majority heading leisurely for North Kaweka trig. From the trig, the visibility was excellent with Tarawera and Mt Edgecumbe visible in the distance.

Following in the footprints of the earlier small party, we descended to the three frozen tarns where plenty of photos were taken and then down the steepish ridge parallel to Makahu Spur and into the bush after some scrambling and advice on which was the best way from all and sundry. The descent to Boulder Stream was quite hilarious through the snow and bush, but we all made it and had a good break by the stream in perfect weather, no wind and everyone completely idle.

From here it was a simple walk down the stream for a short distance, along the track to the junction and then along the newly benched track back to the Makahu car park. 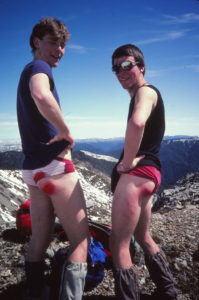 Everyone arrived safely, including the Back Ridge party, although two members were displaying huge red grazes on a tender portion of their anatomy. This was a result of sliding down snow and ice in the Back Ridge area. 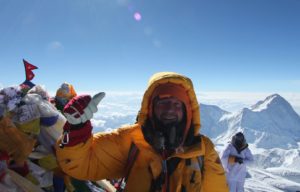 Dean Staples on one of his more recent Mt Everest ascents

Everyone was soon sorted out and on their way back to Napier after a most enjoyable day which was favoured with good weather and was a fitting end to our tenth anniversary celebrations. 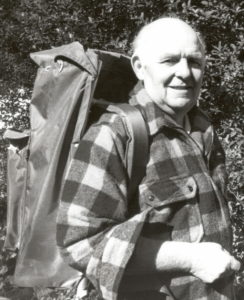 Thank you all for coming along.

Contents: NTC AGM is on Thursday May 5th. There will be supper after the meeting. Club Meeting … END_OF_DOCUMENT_TOKEN_TO_BE_REPLACED

Contents: NTC AGM is on Thursday May 5th. There will be supper after the meeting. Club Meeting … END_OF_DOCUMENT_TOKEN_TO_BE_REPLACED