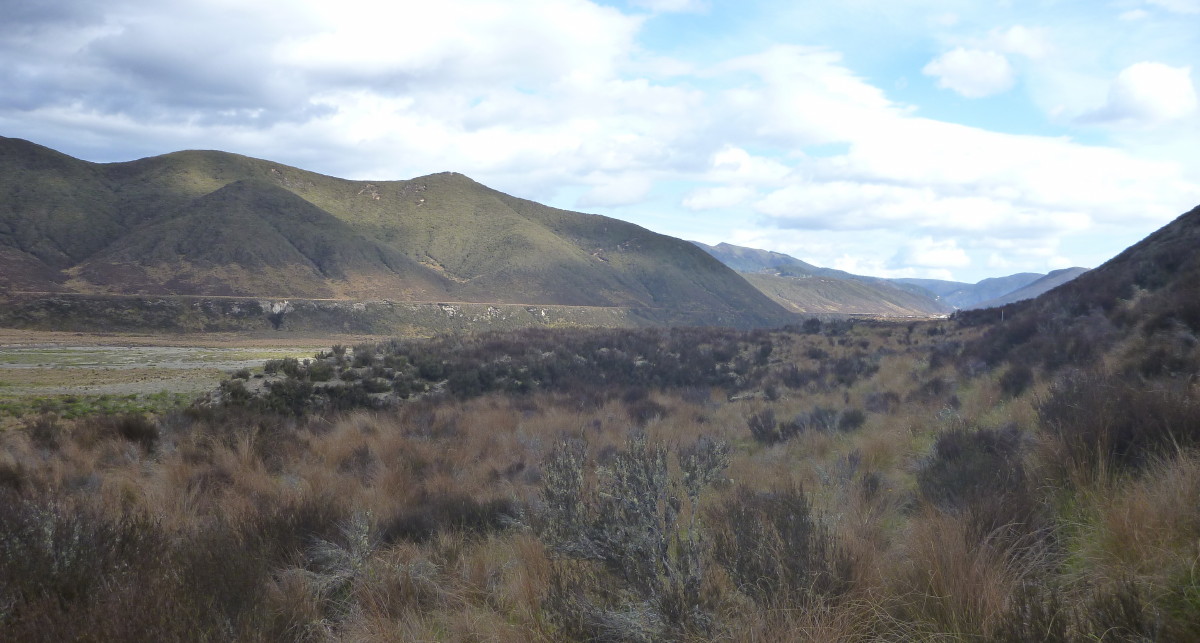 Kaimanawas, Labour Weekend, October 1989
Banner Pix: The North Arm from the junction of the Te Waiotupuritia Stream and Mangamingi Stream, which become the Ngaruroro River 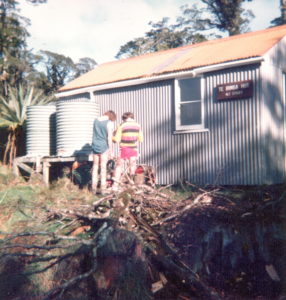 Te Iringa Hut as it was

Friday saw eight stalwarts leaving Napier at 6.15 and heading for the Kaimanawas for four days’ leisurely tramping. The decision was made to begin at Te Iringa and do the circuit Oamaru-Boyd-Cascade, so Ray’s car was taken to the road end and Bob’s stayed at Te Iringa car park. We set off in high spirits on a nice day and had a very uneventful walk from the cars to Te Iringa Hut and then on to Oamaru, with Cath setting the pace.

We arrived at Oamaru at about 4pm with the weather closing in. John and Geoff decided to sleep in the hut which was occupied by five hunters and a ginormous dog, half-Ridgeback, half-German Shepherd. The remainder of us hardy souls camped on the river flats. The two melodious snorers were isolated into a one-man fly for the night, with the shorter one taking up the most space. It rained most of the night, but we all weathered that well and after breakfast packed up and left about 8.15, following the Oamaru River.

Oamaru Hut sitting above the confluence of Kaipo, Mohaka and Oamaru Rivers

It was a pleasant walk through wet bush along wet tracks; it made one appreciate New Zealand rain forests, as well as a Lazy Boy Rocker in front of a cosy fire and colour TV and a nice cup of tea. We reached Boyd Lodge at about 3.30, finding hunters in residence; but we got bunks for everyone and spent a pleasant evening, while outside it absolutely poured with rain.

Next morning it was still raining and the Ngaruroro had risen somewhat, but we decided to carry on. It had stopped raining when we left at 8.30 and the weather appeared to be breaking. We travelled up the Ngaruroro, unable to cross because of the swiftness and height and eventually reached the confluence of the Mangamingi and North arm, where we were able to cross. 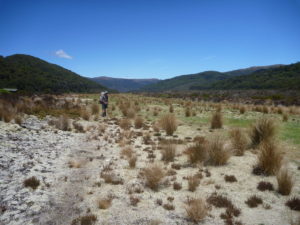 The airstrip near the top end of the North Arm

Travelling up the North arm was not easy as it began to rain quite leisurely and some heavy hail added to the excitement. The country was very swampy all the way up the valley with streams full from seepage from the hills and no real track. We spent most of our time tussock-jumping or in water anywhere from ankle- to navel-deep, depending how far your navel was from the ground. The only dry walking was along the airstrip.

We stopped in the rain and had a quick lunch and then on into the bush for the long haul up to the saddle and then the final climb before the fairly steep drop to Cascade Stream. 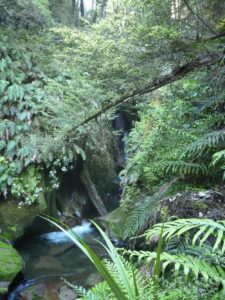 The stream was running fast and high and the log crossings were done mostly by sitting down and shunting across with feet astride, very hard on the butt! On reaching the second log crossing, we found it covered by half a metre of water, so it was a case of sleep out or cross back over the earlier log and find a way round to the hut. This was achieved with some climbing and bush-bashing.

We wet and weary eight were made welcome by two hunters and the four empty bunks were soon allocated, with two of us sleeping on the floor.

The Cascade Stream was rising one foot per hour, so the hunters told us it looked like we might be spending an extra night at the hut. While getting our evening meal, the door opened and two more trampers arrived. A tall young chap and girlfriend had crossed the stream with water up to his waist and his girlfriend hanging round his waist, just on dark.

It was still raining as we all had our meal and then bedded down. A good night was had by some, and the Nose Trumpeters rendered some entertainment – including the record for the World’s Longest Single Snore.

The morning dawned wet, but on checking we found the stream had dropped – so it was breakfast, pack up and away we went. The crossing was only about ‘EEK’ high and we made our way out towards the car park. Ray had problems with his knee and so after rendering first aid and sharing out his pack, Cath and Bob went on ahead to get the cars and John to drop his pack and then come back for Ray’s. We made reasonably good time and met John about 20 minutes from the car park.

The sun shone at last as we reached the park at 2pm, changed into dry clothes, had lunch and a hot drink. Then, apart from a brief interlude to sample mine host’s refreshment at Rangitaiki, it was back to Napier.

On behalf of the group, our thanks to John the leader and drivers Bob and Ray.

Contents: NTC AGM is on Thursday May 5th. There will be supper after the meeting. Club Meeting … END_OF_DOCUMENT_TOKEN_TO_BE_REPLACED

Contents: NTC AGM is on Thursday May 5th. There will be supper after the meeting. Club Meeting … END_OF_DOCUMENT_TOKEN_TO_BE_REPLACED