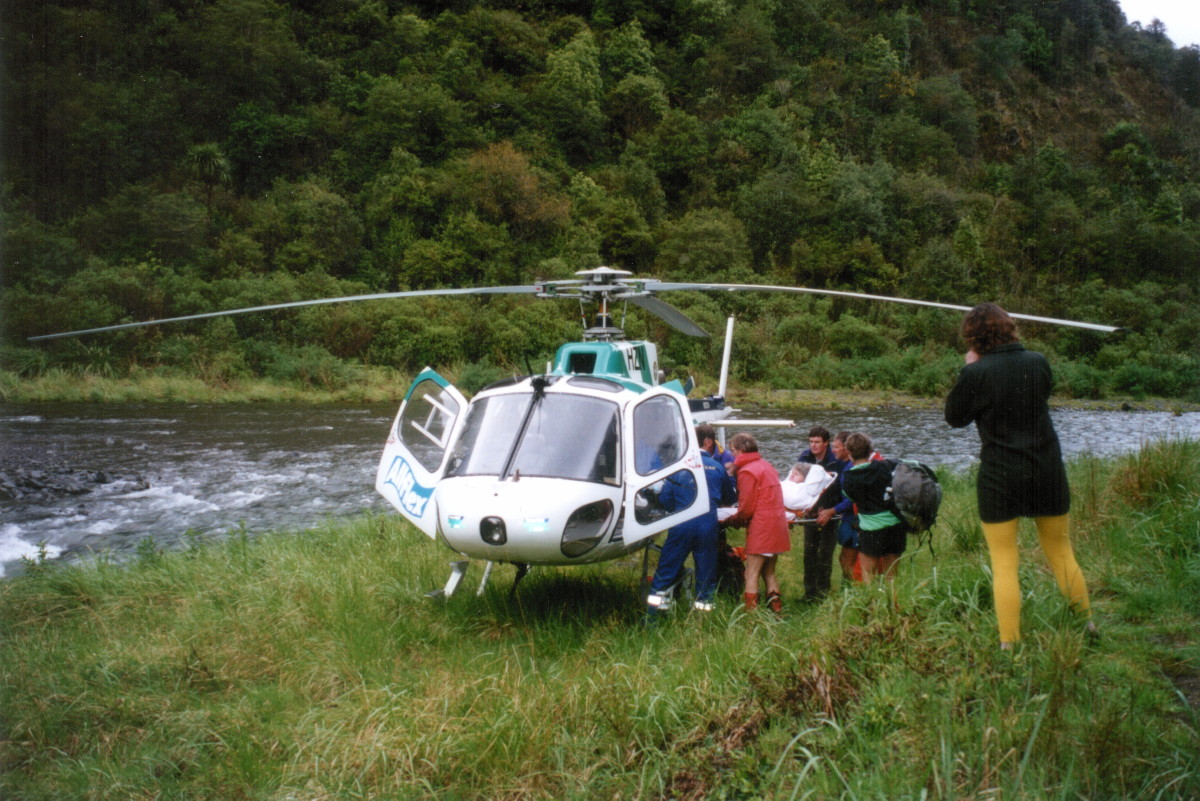 Friday
We went to Taihape and up to Mokai, driving beside the Rangitikei River with its magnificent gorges and masses of kowhai trees in flower. After parking the vehicles and getting changed, we headed up a farm track towards Mokai Hut. On the way, Little Sue was not feeling well and decided that now was the best time to pull out. It was arranged for her to drive one of the vehicles back to Napier.

Past the hut, the track seemed to branch off in different directions. After some mucking about in the manuka, and bush-bashing, we found our way to the saddle in an open area below Mokai Patea. Once we had crossed a nearby stile, we were on the well-defined track which led to Iron Bark Hut. Further on, the track started to descend more steeply and as it was wet and greasy, there were a few tumbles. 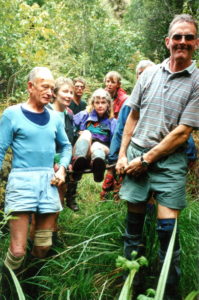 Christine on the makeshift stretcher

Then we found that Christine had fallen and had a bad cut on her leg. Her wound was cleaned and properly bandaged. Ted walked back up the track with Ali and his cellphone to call for help from a high point. If this was unsuccessful, they would have to walk out to the farmhouse to call for help. The rest of us carried Christine down the track inside a groundsheet. It proved inadequate. 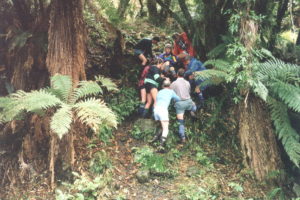 Some steep descents with the stretcher

Paul cut several lengths of horopito with his fold-up firewood saw and a rough stretcher was made. As there were seven of us, we were able to carry Christine down to the hut where she was made comfortable. After not too long a wait, the rescue helicopter arrived from Palmerston North. It had picked up Ted and Ali on its way to the hut.

Ted had had to climb above the saddle to get a cellphone signal. He dialled 111 and was asked to wait there and save the cellphone battery. The pilot asked him to wait on the high point so that he could be contacted about the local weather conditions. The helicopter arrived promptly after the 111 phone call, which impressed us when you consider all the bad publicity the 111 system has been receiving lately. They were soon in the hut, putting Christine on a stretcher and discussing what medication she had taken. In no time at all, she was in the helicopter and away. 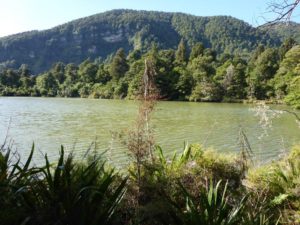 After that traumatic first day, we headed for Ruahine Corner via Lake Colenso. It was straight across the Whakaurekou River and up the main spur to the top of the ridge leading to Lake Colenso. Three were going to the lake and back to Iron Bark for the night. We got along at a steady pace and dropped down into a large swampy area which told us we were getting near the lake. It was neat to see all the red beech coming into flower; also, a mountain cabbage tree.

The track is not well marked where you turn off the main track and very wet to get to the lake where we were greeted by numerous paradise ducks. After photos, etc., we moved on to Colenso Hut for lunch and a look around. 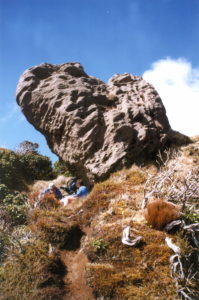 Potae, a landmark rock formation along the track

After saying goodbye to the three going back, we plunged into the stream and went down to the next river junction, made a right turn and headed up the Mangatera to go up the second side stream on the true right. After an hour or so, we found the way out with a big climb ahead to the top of Potae. It was a real grunt up with the breeze getting stronger and cooler as we approached the summit, to be pleasantly surprised to find the first of the ranunculus in flower. After a break, it was down towards Ruahine Corner with some spectacular rock formations on the way, and a massive slip on our right. 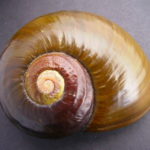 We were perturbed to find hundreds of Powelliphanta snail shells. Numerous theories were worked on but we had no real answers. We have reported this to DoC.

It was slightly downhill to the hut and were pleased to arrive after a hard day’s tramping at 4.45 pm. We settled into the six-bunk hut, which has been altered with a new stove and water tank. We had tea and were pleased to go to bed at about 8.30 pm, and listen to the wind blow all night. 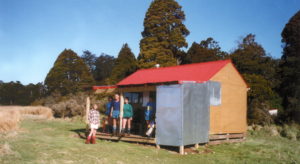 I woke up around 4.30 pm, probably due to the 8 pm bedtime. Soon enough, I could see the roof skylight becoming visible as the morning dawned. The hut faced north with a good-sized window above the stainless steel sink. Outside, a sturdy verandah housed a roomy woodshed to the left and to the right stood a new rainwater tank, complete with tap and soap. The hut had been newly renovated and a pleasure to use.

The map showed a 4WD route in from the Taihape Road direction and an airstrip was the focal point of the plateau. In the opposite direction was the walking track which had led us to the hut the night before. This same track led us away from the hut on Sunday morning. It was hard not to notice hundreds of dead native snail shells along the way.

Just before high point Potae, we turned left off this route, heading across a south-east saddle and still more snail shells. As we climbed, we became more exposed to the high winds which abated a little as we ascended the other side. We turned north-east and were again being blasted on the starboard side. We found temporary shelter in the lee of high point Piopio and stopped for a quick lunch, huddled in the short scrub.

The route then climbed steadily upwards through waist-high tussock and scrub which made the going that much more strenuous. Another bush-clad saddle led to the sodden hilltop flats south-east of Aranga Hut, where two hunters told us of a snowfall on Friday night. We decided to go the extra distance to our end point, Masters Shelter, that afternoon.

Thanks to Jane and Richard for the ride home.

Footnote from Christine:
I would like to thank everyone for their help in getting me bandaged and stretchered down the hill to the Tranzrail helicopter. The policeman on board thought you all made a wonderful job of the stretcher. The paramedic wondered what he was doing there as the girls had done such a great job of covering my wound that he didn’t even need to check it. The three nights I spent in Palmerston North hospital were just like a five-star hotel with three three-course meals daily but no wine! A special thanks to Simon who tried to climb in the helicopter with me and Paul for travelling all the way back to Palmerston North to bring me home.

A real team effort. For those who didn’t know, I crashed head-first downhill, leaving a large laceration so deep and long it didn’t bleed. Broke a tendon and I’m presently learning to walk again, but I’m fine.

Contents: NTC AGM is on Thursday May 5th. There will be supper after the meeting. Club Meeting … END_OF_DOCUMENT_TOKEN_TO_BE_REPLACED

Contents: NTC AGM is on Thursday May 5th. There will be supper after the meeting. Club Meeting … END_OF_DOCUMENT_TOKEN_TO_BE_REPLACED