At 9.00 am, we needed an alternative for our planned Kaweka J and Studholme walk, due to heavy drizzle and strong winds. The main party decided to go through to Middle Hill Hut and on to Makahu Road.

Vic, Alex, John, Ron and John drove the vehicles around to Makahu Road. On the way, they stopped to look around one of the last remnant bush stands in the area. They slowly meandered around Balls Clearing, enjoying this beautiful bush that once must have covered most of Hawke’s Bay.

Manfred, Jeanne, Graham and Thelma decided to walk to the Iron Whare and returned to the car park. The remainder of the group began a wonderful day to Middle Hill Hut. Red Beech covered most of the way from the Makahu car park to Kaweka Flats Bivouac, and along the way, we crossed the Pinnacle and Boundary streams, and Makahu River. 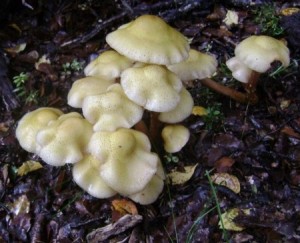 The next section from Kaweka Flats to Middle Hill Hut was again through more beech, totara, coprosma, corokia in berry and many other trees, bracken and mosses. The track undulated frequently, with large drops and rises to cross the run-offs in the region. The rain became a light drizzle, and occasionally clear skies made it a pleasant, warm walk. 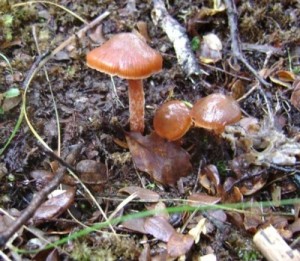 After crossing the Koara stream, the route joined the Ihaka track. To the west of this is Whetu and its surrounding rugged terrain of the Kaweka area. To the East, Middle Hill Hut where the beech forest quickly changed to kanuka. We reached the hut for a late lunch, and then set off in heavy drizzle towards Pinks Hut and the Mangatutunui stream. Part way along from Middle Hill hut to Pinks Hut, the bush reverted back into beech, and we met up with Vic, who had come in from Makahu Road/Mangatutunui stream end. We arrived back at the vehicles about 3.30 pm.

It was a day to be remembered for the tracks covered in different coloured mosaics of beech leaves, with many variations of fungi and mosses, set among native bush and the rugged Kaweka Ranges.