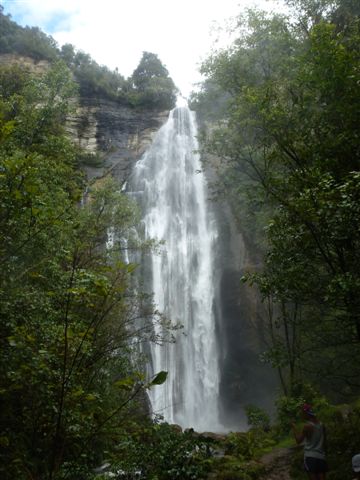 The scheduled trip was to have been to Te Waewae but again it didn’t happen. Judging by the state of the Main Highway after the recent heavy rain, we probably would not have made it. The highway was a massive mess of slips. One rock which we had to detour round was bigger than the van. So it was Plan B, Boundary Stream. 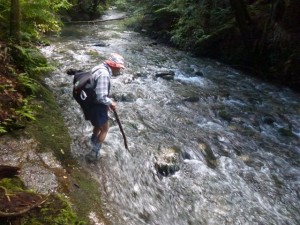 The day was perfect…the best of the summer so far…..which wasn’t hard. The van with eight on board stopped at the top end of the Boundary Stream Walkway. We checked out the new Kaka enclosure which is opposite. Looks good…just waiting on the Kaka now (apparently due in Sept.). Then it was off round the Matai loop and down the track to exit, at the Shines Falls car park ,to the van which was kindly ferried round.

We soon split into a fast pack and a slow pack, with the latter spending more time to enjoy the bush and in particular the birdsong. It was a great day for the birds. The dawn chorus lasted till well after lunch. DoC must have the predators well under control there. The regenerating bush, in particular Rewa Rewa, also confirmed this. We did however see very recent sign of deer on the track and also evidence of pigs. Some of the Kakabeak plants we had planted with DoC look real good but others not so and some had succumbed to the weeds. 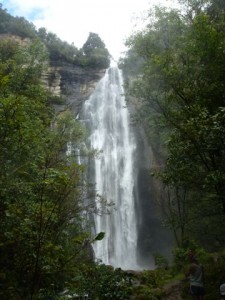 The recent rain meant the stream was high and a dry boot crossing was out of the question and care was needed. Shines Falls looked really good although the photos don’t convey it. There was the mist and spray all round just like at Niagara but not quite as much noise!

On the way home we took a detour to check out the north section of the loop road back to the highway.Like most “shortcuts” it wasn’t a shortcut but the views were good and we can cross it off our bucket lists.It was something new for all of us.We also checked out Lake Tutira which was full to overflowing.

Sparrowhawk bivvy, Ruahine Forest Park, Saturday 6 August 2022 Banner Photo: The view east, towards the Wakararas and beyond On a beautiful … END_OF_DOCUMENT_TOKEN_TO_BE_REPLACED

Prologue: The author was on the Whirinaki tramp, reported on this website under the headline 'We observe a mock turtle and the rodent of Upper Te … END_OF_DOCUMENT_TOKEN_TO_BE_REPLACED

Ruahine User Group A meeting was held on Monday 25 July, in the NZDA rooms in Dannevirke.  Julia … END_OF_DOCUMENT_TOKEN_TO_BE_REPLACED

Ruahine User Group A meeting was held on Monday 25 July, in the NZDA rooms in Dannevirke.  Julia … END_OF_DOCUMENT_TOKEN_TO_BE_REPLACED

Ruahine User Group A meeting was held on Monday 25 July, in the NZDA rooms in Dannevirke.  Julia … END_OF_DOCUMENT_TOKEN_TO_BE_REPLACED

Ruahine User Group A meeting was held on Monday 25 July, in the NZDA rooms in Dannevirke.  Julia … END_OF_DOCUMENT_TOKEN_TO_BE_REPLACED