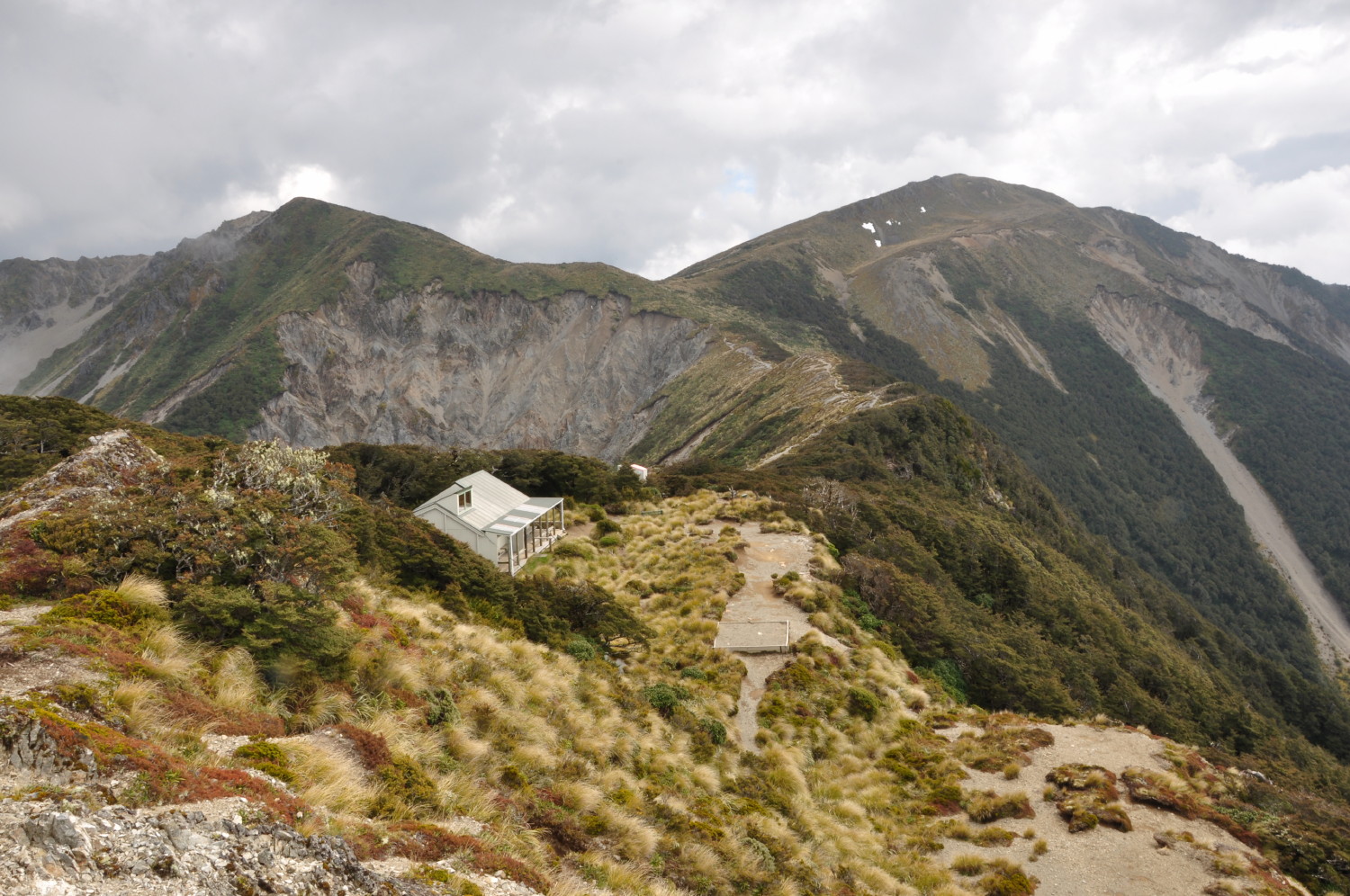 A large group set out on Saturday morning in the direction of the Sunrise Hut. We arrived there around 10.00 for morning tea. I’d been to 66 a couple of times and therefore decided to join Ted, Paul and Viv, who were going to Patiki. The first half hour or so was straightforward, following the tops. In the cold wind, I was sure I had made a good decision, and indeed as we turned away from the tops onto the ridge on our right, the wind fell. 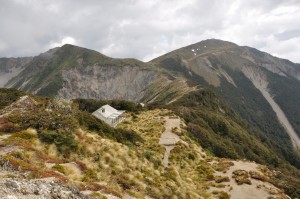 We had a couple of minor issues following the ridge, where slips at both sides had only left a narrow sandy mini ridge to walk over. After that, we entered bush. I quite enjoy a bit of bush bashing and this was not too bad. The bush descends to a gully, from where we climbed back up to the peak. There’s no path anywhere, so it took us some time, but by 12.15 we reached Patiki 1370m in beautiful sunny weather.

We stopped for lunch, out of the breeze in the tussock grass. The plan was to follow the main ridge down and then angle to the right towards the Triple X Hut. Within 10 minutes from our lunch, we found ourselves in quite dense bush. Paul decided to try to skirt the dense stuff to the right and disappeared from our views in no time. We waited a while for him in a clearing, and tried to yell him back towards us, but each reply seemed further away.

Ted had in the meantime scouted the area and not found a passage through the dense bush. We were now convinced that Paul was on a smaller ridge to our left, which looked like beech forest and we decided to give up on plan A and follow him down that ridge. Five minutes later, the four of us were back together and started descending the ridge. With all the previous rainfall, it turned out to be a slippery affair. More than once did I find myself slipping, falling, stumbling and hugging trees. I was in good company; all of us took a close look at the forest floor at some stage. Once, we thought we had found one of those lovely shingle slides; unfortunately the one we followed end in a small fall, and we had to climb back up and cross over to the next ridge. This one did get us down to the Triple X stream.

From here, I was sure, it was a simple affair of following the river. Unfortunately, the growth on both sides of the river was so dense that we were forced to enter the forest above the river again and try to get out that way. By now, it was around 15.00 and I was trying to remember how much clothes I had stuffed in my backpack; it no doubt can be bitterly cold at night in that damp bush. I shouldn’t have worried though, as suddenly Ted made a sharp turn to the right and we connected with the bottom part of the Sunrise track and by 16.30 were back at the cars after some five hours of bush bashing, which by then had lost most of its appeal.

Did I enjoy it? I guess I did. Would I do it again? Certainly not tomorrow. Apparently it takes 18 years to convince yourself that it is a good idea to go to Patiki and follow the main ridge down…

Sparrowhawk bivvy, Ruahine Forest Park, Saturday 6 August 2022 Banner Photo: The view east, towards the Wakararas and beyond On a beautiful … END_OF_DOCUMENT_TOKEN_TO_BE_REPLACED

Prologue: The author was on the Whirinaki tramp, reported on this website under the headline 'We observe a mock turtle and the rodent of Upper Te … END_OF_DOCUMENT_TOKEN_TO_BE_REPLACED

Ruahine User Group A meeting was held on Monday 25 July, in the NZDA rooms in Dannevirke.  Julia … END_OF_DOCUMENT_TOKEN_TO_BE_REPLACED

Ruahine User Group A meeting was held on Monday 25 July, in the NZDA rooms in Dannevirke.  Julia … END_OF_DOCUMENT_TOKEN_TO_BE_REPLACED

Ruahine User Group A meeting was held on Monday 25 July, in the NZDA rooms in Dannevirke.  Julia … END_OF_DOCUMENT_TOKEN_TO_BE_REPLACED

Ruahine User Group A meeting was held on Monday 25 July, in the NZDA rooms in Dannevirke.  Julia … END_OF_DOCUMENT_TOKEN_TO_BE_REPLACED