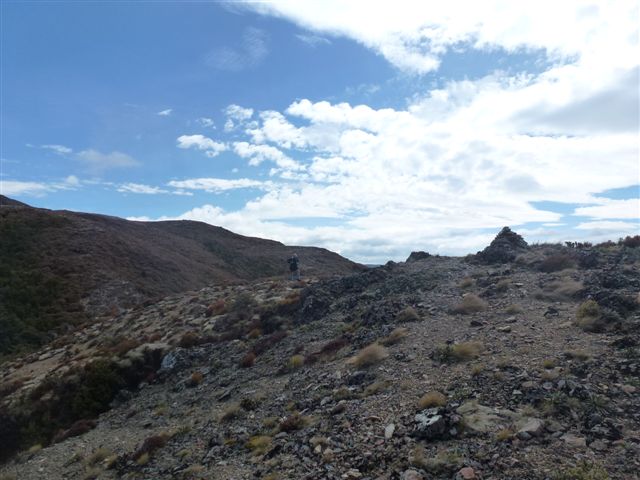 The good ship “Metro” left Winery Docks at the appointed time of 7.30 am on a fine and sunny morning with Capt Kelvin Shaw at the helm and his usual motley crew on board.

We sailed off down to the Port of Mangleton where we disembarked and set forth across farmland towards the promised treasures of Bob’s Spur and beyond. The track was in fair condition albeit somewhat slippery and after climbing steeply, we passed out of the bush and into more open scrub and outcrops of rocks. The climb afforded excellent views of the Mangleton area, with its rolling country, greened up by the recent rains.

We were pleased to welcome back Club Captain Alison after her sojourn down among the delights of Queenstown and the “Thailand Tiger” aka John Gray, whom his partner Sarita had kindly loaned back to us for a short time. Kelvin had been less than frank with his neighbour Wai, who has joined us on a couple of trips. He told her it was a trip over farmland and would be quite easy. Ever sold used cars, Kelvin? 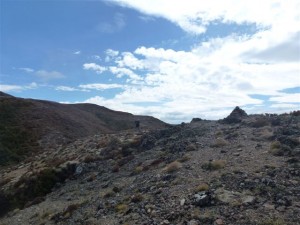 As we broke out into the scrubby tops, things became more difficult. The ground was very uneven and you could not see where to place your feet amongst the scrub. Much debate took place as to whether or not we were too high or low in relation to the entry into the bush which was not marked with orange markers or cairns and was known to be difficult to locate. However, we did have John Marshall and Vic Bullock flash us from the first trig point (with a mirror, in case you were wondering!). To reach that point was a creditable achievement for two veteran trampers.

Thanks to Alison’s sense of direction and eagle eyes, we found the first entry point into the bush. We passed through that to another open area and began the process again and then a third time before we entered a patch of bush and found a sheltered spot to have lunch. Prior to that, the north-westerly wind was so strong it had nearly blown us over in the exposed areas.

After lunch, the punishment began as we set off down Three Fingers Spur. Initially, the bush was reasonably easy to navigate through. However, we soon found that we were out into scrub, and the navigating became extremely difficult, as the tracks were overgrown.

At some point, Alison disclosed that she had just remembered that the last time she was here she vowed never to return. She could have told us earlier! Individual members cast about through thick scrub, seeking the elusive track. Time and again, we found ourselves having to re-establish where the crest of the spur was so that we didn’t end up in some difficult watershed.

Unless you were there, it would be hard to imagine the extent of our difficulties. The scrub was over head height, even for those long-fellas amongst us. Keeping the party together and in contact was challenging. Time and again, we struck false leads which resulted in us pushing and heaving and wriggling and contorting our way through the dense scrub – only to be thwarted and having to try and go back again.

Some three hours later, and with copious scratches and bruises to show for it, we broke out onto the head of the rocky slip. Not before Kelvin, who had led some of the navigating, went from hero to zero to hero and back again, as he found and then lost the track. Robyn decided on the way down that her mode of transport would be to sit down and slide down, while Murray tried to impress others with his acrobatic skills by tumbling some 3-4 metres while leaving some skin behind.

The rocky slip provided a swift means of ending the pain and shortly afterwards we were making our way back across the farmland to the van at around 15.40 hours and then home.