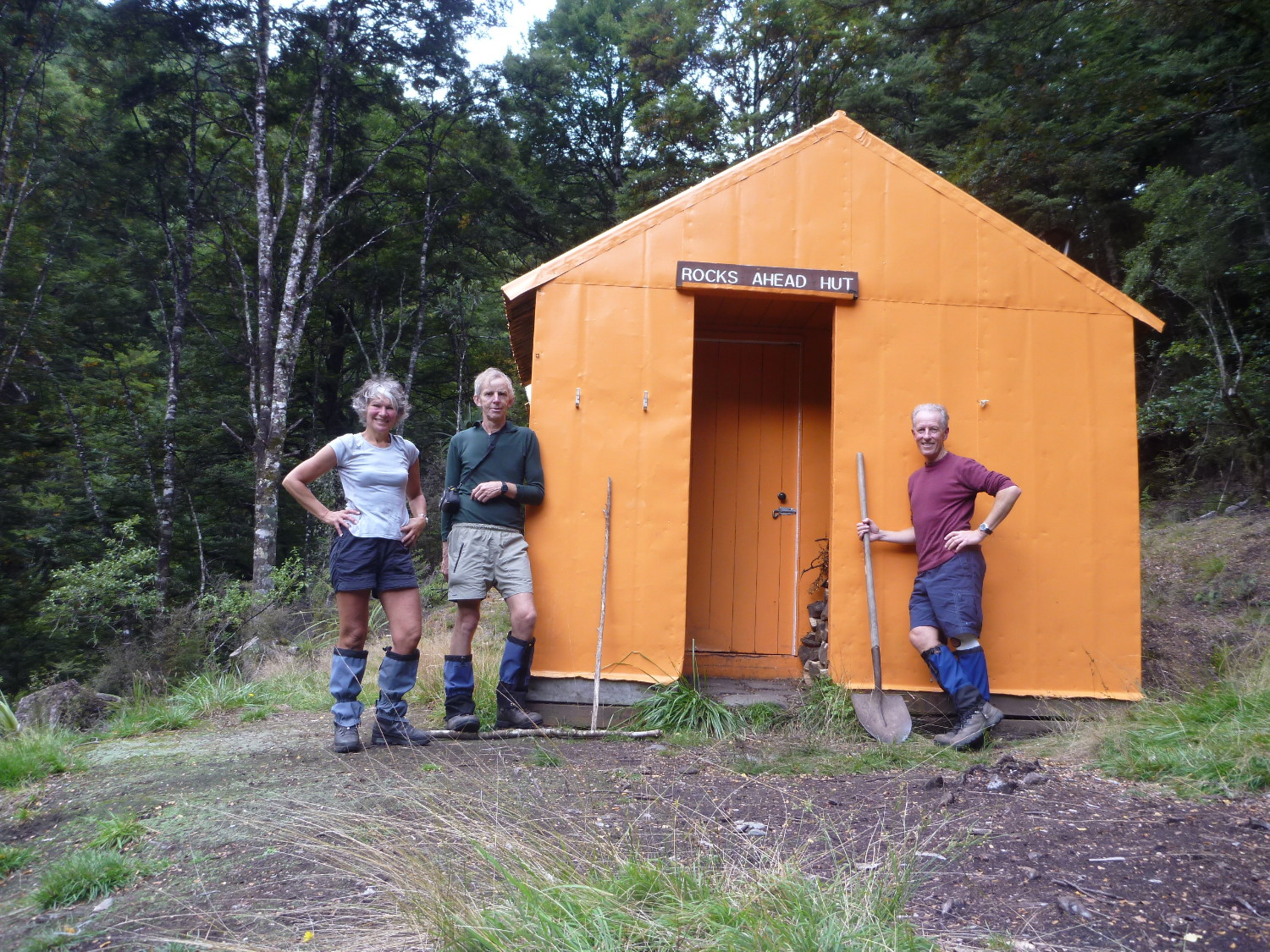 With the Whirinaki FP now seemingly inaccessible, we decided to do a multi-day tramp in the Kaweka FP. Yes… even in the middle of the ‘roar’, the hunting peak season.

On Friday morning, we left from Makahu Saddle car park and headed for the tops. We accidentally walked up the Makahu Spur; however, as we hadn’t been up for some time, it was a change. On arriving at Dominie Bivvy, we stopped and checked inside and refilled our water bottles. Onwards to Kaweka J, with only slight winds (at least not gale force). On the tops, the visibility was minimal – about two waratah standards. A few small pockets of snow remained from snowfall earlier in the week. John and Geoff had a snowball throwing competition, and then we decreed that silly photos were OK on this trip. See the results…. 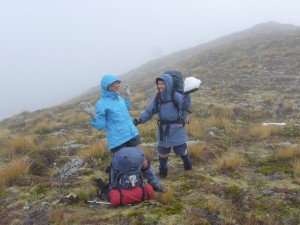 The track to the Back Ridge Hut branched off on reaching Stern’s Saddle, and we got some great views as the cloud was clearing. Venison Tops, Manson Tops and Mt Meany could be seen. We kept on tramping up the saddle, coming out of the bush into an open area where we found a spot out of the wind for lunch.

Then it was back into the bush, on a relatively flat track through to the Rock’s Ahead junction. We got a good view of the track to Kiwi Saddle Hut, and then around the ridge and up to Kaiarahi. Good to see it from Back Ridge this time around. We guessed that Castle Camp would be in the bush on the bottom flank of Kaiarahi. We met a hunter, who was trying to catch up to his girlfriend somewhere in the Kawekas. The wind was biting and so we quickly descended off Back Ridge and headed down to Rock’s Ahead. The DoC timing was for two hours from the junction, and was spot on. We arrived at 3.45pm, having left Makahu Saddle at 8.45am; we had taken seven hours, just as we had anticipated.

Rock’s Ahead is a four-bunk, old forestry-style hut with no verandah or water tank. Water is collected in containers from the Rock’s Ahead Stream or the Ngaruroro River, which the hut overlooks. John elected to pitch his tent on the edge of the helipad platform, whilst Geoff and I got bunks inside. Two other hunters/fishermen had gear already claiming the other bunks. 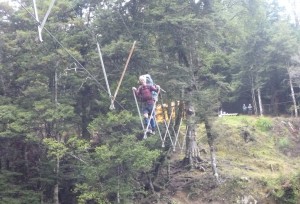 We all washed and then relaxed over a cuppa, and then when light began to dim, had our evening meals. Ruth, one of the other guests, arrived and we all had a good chat. As we got into our sleeping bags, John arrived back from a long day and evening hunt. No luck or deer noises on this night.
The following day, we all got some excitement walking over the three-wire bridge to the start of the track up to Tira Lodge. The bridge crosses Rock’s Ahead Stream, which was easily navigable on foot, but we wanted to keep our boots dry this trip. Ruth and John looked on, assessing our technique on the bridge and ladder.

The DoC track time for Tira is two hours, and again was spot on. The track climbs through beech forest heading for Venison Tops. Just before leaving the bush, an old tin sign nailed to a tree directs the tramper to Tira Lodge. The hut was full of food and the necessities of a home away from home for four hunters. They were away, presumably hunting, so we decided to have a good half-hour break and a hot brew. We did not have far to tramp today. As we were leaving, one of the hunters returned and offered us a cup of tea, but we were already on our way, and declined. They had been choppered into the lodge and were there until Thursday. He did not seem to be happy about the long stay, but with all the gear surely that would be survivable.

The track to Ballard Hut descends off Venison Tops and then is level for a while, before you walk along a small saddle and then start ascending to the main Kaweka Range. 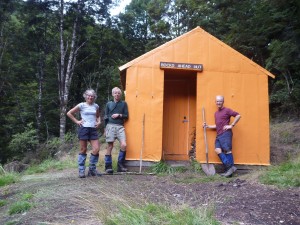 Before leaving the bush, we put on over-trousers as the cold wind was up again. Visibility was also down to 100 metres. The track over to the Ballard Hut junction is easy and we soon descended to the hut. With the lack of visibility, the way was not quite clear from above, but we made our way down the shingle and tussock. Geoff spied the hut in the bush, when he was 20 metres away. Hoorah… no one else here as yet, although it was only 1.45pm. We made our beds and then cleared the ash and debris from the Wagoner. I don’t think it had been emptied for some time. We got the fire going and replenished the woodpile. These are all things you can do when you arrive early at the hut. Soon we were all as warm as toast, and enjoying the afternoon and evening. With the clag and drizzle on the tops, we doubted if we would have hut companions tonight.

On Sunday, we were all awake and thus left early, around 7.20am. The visibility was again poor, but still we decided to go to Whetu, as we usually bypass the trig. We met two hunters, father and son who had walked up from Middle Hill. By all accounts the hut was full, a tent pitched and bodies on the verandah. This is a hut to keep away from in the hunting high season. 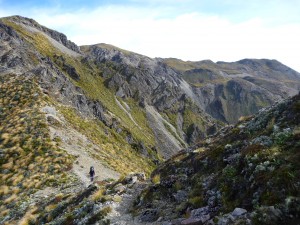 As we made our way around the tops, the cloud swirled around and then lifted. The last small climb up and around the western flank of Kaweka North, and we had closed the loop. With the wind a little cold, we descended until clear of it and found a spot to have a break and enjoy the views from Mahia to Cape Kidnappers. Hawke’s Bay was bathed in sunshine. When we looked back, we could see the tops which were now clear, and marvel at the distance we had travelled so quickly. This time we took the Trial Spur track, as it is easier on the descent, and we decided to stop and have a brew and break at Makahu Saddle Hut, before returning to the car.

The trip had taken John and Geoff to some new huts and tracks, and for me the track from Rock’s Ahead up to Tira was a first. We had all enjoyed the trip and the company, and being outdoors for three days.

Aranga Hut On Saturday 14 January the tramp was changed to a loop in the Northern Ruahine Range. … END_OF_DOCUMENT_TOKEN_TO_BE_REPLACED

Aranga Hut On Saturday 14 January the tramp was changed to a loop in the Northern Ruahine Range. … END_OF_DOCUMENT_TOKEN_TO_BE_REPLACED